island out of time

A comment from Bill today reminded me that I had wanted to post some more photographs from Smith Island. Thanks for the reminder Bill.
Smith Island, like Tangier Island, is a special kind of place. I've written about Tangier Island before, I've made several visits there (mostly by ferry but once by sail on my first ever cruise on Spartina).
This was just my second visit to Smith Island, I'll be back. It is, like Tangier, an island out of time. In fact the best book about Smith Island is called Island Out of Time, A Memoir of Smith Island in the Chesapeake.
And if you want to see more about Tangier Island, check out the the ESPN 3 television ads that were filmed on Chesapeake. They are funny, but at same time they capture the feel of the islanders. You can see some of them here, here and here. (I'm not much on watching internet video advertising, but these are worth checking out. Really!) 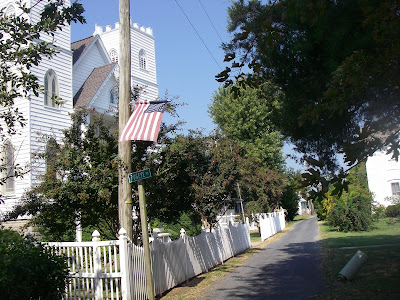 That is looking down Union Church Road, the main "road" that cuts north/south through Tylerton. Picket fences, narrow lanes. Check out the name of the cross road on the sign, "Bugeye Road." Bugeyes were boats developed on Chesapeake Bay for oystering, a two masted ship that today would be considered a ketch. 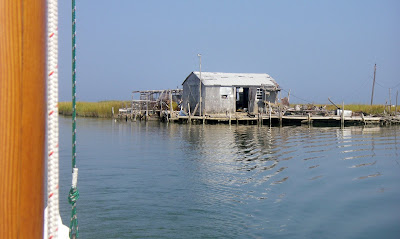 That that is a crab shanty sitting on the edge of the marsh of Sheep Pen Gut. I could not tell if it was still in use or not, it did not look in very good shape. But sometimes these places are used in the spring and early summer for softshell crabs, then sit unused for long periods of time. 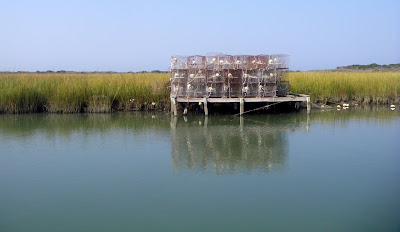 And crab pots sitting on a dock on the edge of Sheep Pen Gut. 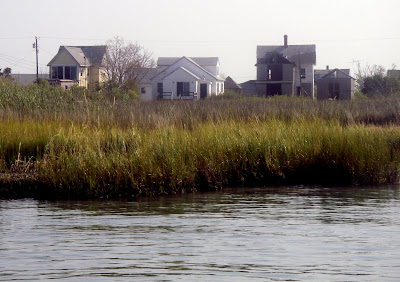 Above are some homes on the edge of the marsh in Rhodes Point. 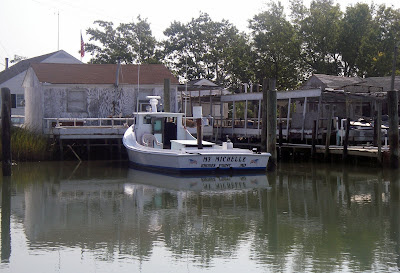 And a deadrise tied up at a crabhouse in Rhodes Point. The waterman probably lives in the house right next to the crabhouse. I wonder how many generations of his family have worked out of that little piece of waterfront. 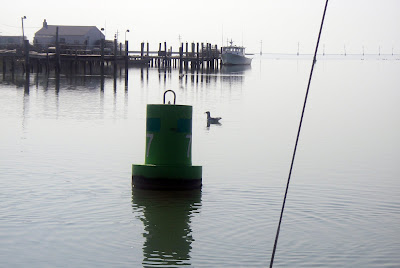 One of the few aids to navigation that I recognized on Smith Island, the rest were sticks and pipes stuck out in the shoals. 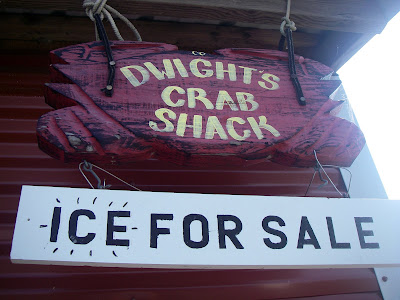 Dwight's Crab Shack sat out on the public pier in Tylerton. Nobody was around when I tied up, but the doors were wide open. And a batch of just steamed crabs was sitting in a bushel basket. 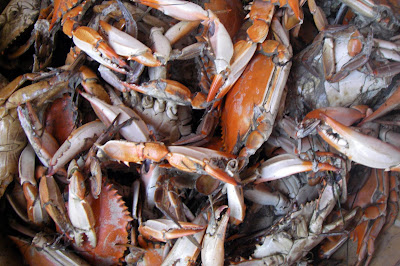 Below is the sign outside of Drum Point Market, the restaurant/grocery store in Tylerton. I can attest to the quality of their crabcakes. I'm not much of a cake eater, but if you like cakes I'm sure you would enjoy their Smith Island Cakes, a seven layered cake. 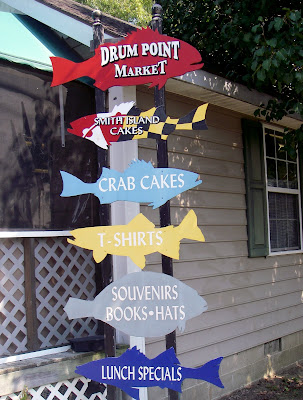 And finally a nice little sentiment from the screened-in porch at the Drum Point Market. These island, both Tangier and Smith, have been having difficult times for a while now. Between the economy and the environment, it has been rough. But I don't know what it is, something about island people maybe, but they always seem to enjoy life.
steve 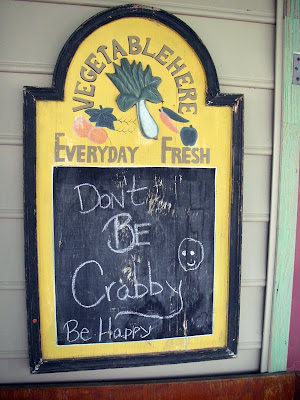 Excellent. Along with the earlier Smith Island post. Two I'll come back to, for sure.

If I were able, I'd live here. There's something about the solitude and simplicity of these islands. Not unlike Tilghman, but more isolated.

Barry,
hope you had a good time at the small craft festival. Did you take the melonseed? Will you be posting some photographs?
Baydog,
I know what you mean. I could see heading out there for a few days with the wife, a couple of good books and a couple of good bottles of wine to to with the crabcakes.
steve

I absolutely have to set aside the time to sail up there and explore the island.

Maybe next year I can make that happen. Take a week off work and just do it.

I've said it before and I'll say it again...you have a real eye for scenery and capturing what makes a place unique and special - well done Steve - what a fantastic cruising area - I'm really green with envy...although I do appreciate the unique wonders of my home patch too.....its just nice seeing where others sail - thank you!
Steve
Welsh guy in Plymouth UK

Indeed, had a great time at the festival. Proof here:

Didn't get my boat in the water, though, as too much water was coming from the sky for too long in the days before to get ready. But did get out on several other beautiful boats. And there was lots and lots of eye candy to enjoy from the docks.