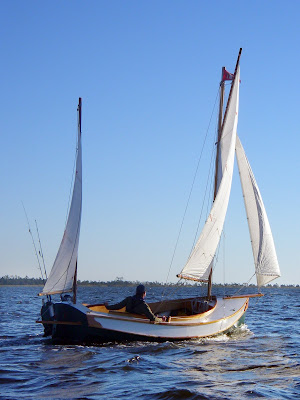 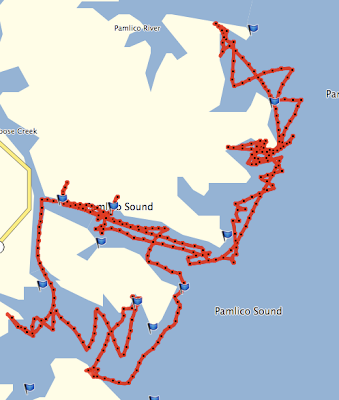 Above is the track for the entire sail, below is the track from Day One. I put in at Pate Boatyard in Hobucken and headed east on Jones Bay. I had sailed through the area three times before - on the SkeeterBeater, the Tag Team and the Weekend Walkabout. This time I wanted to explore the rivers, creeks, bays and marshes on the edge of Pamlico Sound. 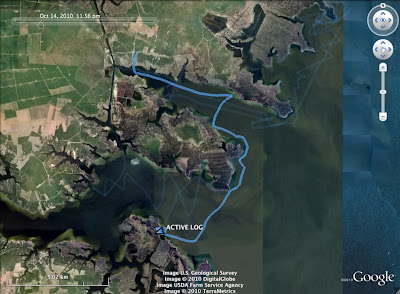 Leaving the boatyard I headed down a narrow canal to Jones Bay. I thought I might have to watch for branches hanging over the water. It was a narrow canal, but there was plenty of room for an easy run down to the river. 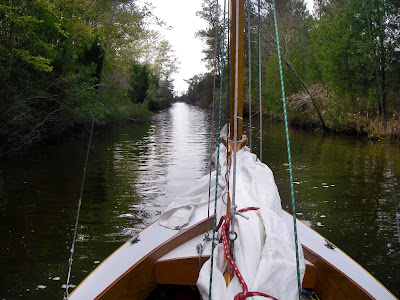 Below is Shawn, owner of Pate Boatyard. He had helped me rig and load the boat, even cut down a couple of tree limbs to give me more room near the ramp, then he helped get Spartina in the water. As I was cranking up the outboard he headed out to Jones Bay on his custom built trimaran. On the river Shawn sailed across my path and wished me well on the trip. Shawn is a great guy, can't say enough good things about him and his boatyard. I'll be back there. I'll be back there a lot. 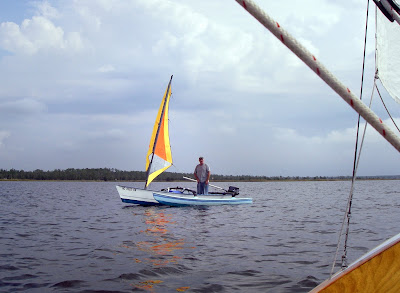 Shawn let me use his tv before I left the dock to check on some thunderstorms that were moving through the area. They all, at the time I checked, seemed to be sliding north and I thought I would avoid them. But no such luck. Below is a screen grab from about two hours into my sail. That little white "x" marks my approximate location as a big storm cell, the largest I've had to deal with, was heading my way. 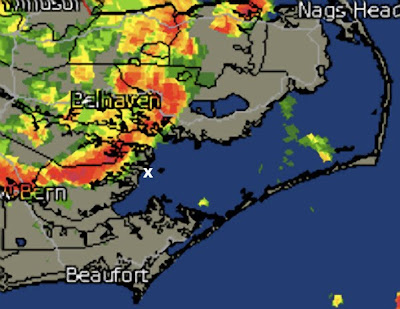 I saw the storm coming, the entire sky to the west was filled with dark clouds. I was nearly at the entrance to Jones Bay heading into a southeast wind. My goal was to make it around Boar Point to Sound Bay and ride out the storm there. The wind quickly swung from southeast to the west. Cool and strong, the breeze carried me downwind towards the point. I had a decision to make - leave the sails up so they would carry me to the point quickly or round up and reef (probably not a bad idea but that would carry me at a slower pace to the point). I chose to leave full sails up to cover as much ground as possible. Then the wind really kicked in. I had no choice but to reduce sail. So I rounded up, the wind heeling Spartina over to the point that she took quite a bit of water over the side. She quickly righter herself once pointed into the wind. I hove to, dropped the main and bundled it up, pumped out the water. The wind was picking up, rain starting to fall as I turned downwind under mizzen and jib towards Boar Point. 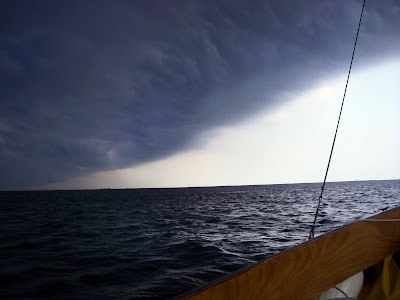 I rounded the point and entered Sound Bay just as heavy rain, accompanied by even stronger winds, hit. I was about 100 yards off the shore. I ran forward to drop the anchor (a ten pound navy style anchor, six feet of chain and then an eight pound mushroom anchor to serve as a sentinal), paid out the anchor line and cleated it off and then tried to drop the jib. I say "tried" because getting down the jib was the toughest thing of all. Usually it will drop right down the forestay, but with the high winds it would not come down. Connected to Spartina by my safety tether I climbed up on the foredeck (on my knees) and pulled it down hand over hand, something that took more effort than I would have imagined. I tied the jib to the bow sprit, climbed back into the the cockpit and start pumping out the water.
I don't know what the wind speeds were for that hour or so it took the storm to pass over. Rain was heavy, it hit the water and kicked up a spray. I lost sight of the shoreline a hundred yards away in the mixture of blowing rain and spray. Spartina rocked to port and starboard more than I had expected, I think the winds were buffeting the still raised mizzen. I just kept working with the bilge pump. A few minutes up forward pumping up forward on the bunk flat, a few minutes in the aft cockpit. 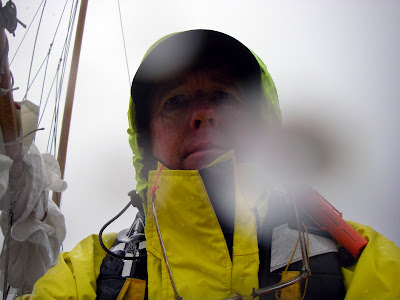 After an hour the wind dropped, rain stopped and the skies cleared. I looked around and everything was ok. A little wet, but ok. So I cleaned up the boat, raised sailed and continued on the trip.

(My photos for the first two days are a little thin. Batteries would not last in my camera. So you will have to take my word for what happened until Dawn Patrol showed up. That nice photo at the top of the post is from Paul and Dawn later in the trip, thanks guys.)

I had a great afternoon under a gentle breeze and clearing skies sailing past Bay Point, crossing the Bay River and skirting the marshes of Maw Point. I trolled a little, cast a lure now and then, but really just enjoyed the scenery. Eventually I reached Pine Tree Point where I entered a small cove (within sight of the northern entrance to Dipping Vat Creek where we passed last June) to drop the anchor for the night.

Steve, Do you think a small reefing drum on the jib would have helped stow it in that wind? I have one on my shelf for my pathfinder when I get to the rigging stage. I know high winds seem to do things their way and not as we would like or plan sometimes.
JIm

Jim,
yes, I suspect a reefing drum would have made it easier. Another solution, cheaper and easier to rig, would be a downhaul. But I'm not sure the added work of rigging a drum/downhaul each time I want to daysail or cruise would be worth it to me when I consider the fact that it would have helped me just one time in six years of sailing Spartina. I try to keep things as simple as possible and with this in mind I'll keep things the way they are. steve