It was clear and cool when I woke up before dawn on the last day of the trip. I raised sail and headed down the creek past Dawn Patrol. I told them to take their time, I was going to sail on Mouse Harbor for a while. A beautiful day, no need to rush.
Once Dawn Patrol left the creek under full sail we headed south, passing by Little Porpoise Bay and entering Big Porpoise Bay just around the next point. Dawn Patrol anchored alongside the marsh. I sailed in alongside to pick up Paul and Dawn for a ride on Spartina. Dawn got on the boat just fine, but a gust of wind pulled us away as Paul was about to get in. Paul made a great leap to get from one boat to the other, landing safe and sound on Spartina.
I had tried to get Paul and Dawn out on Spartina twice before. Once in November of last year, but weather and schedules did not cooperate. And then again on the Tag Team sail, but that didn't work out either. But here we were, all aboard Spartina with Dawn at the tiller on a beautiful fall day. 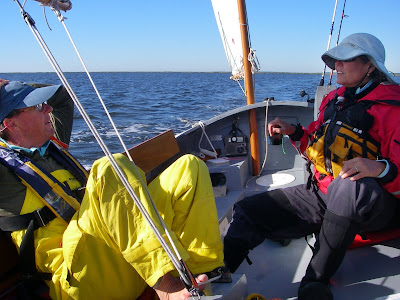 Dawn had a lot of questions about Spartina, how she was rigged and how she was sailed. Why did I set the mizzen a certain way, where did that vibration on the tiller come from? I answered as best I could but couldn't explain everything as I tend to just muddle my way through things.
We had a nice breeze that carried us out of the bay and onto the sound. I think they enjoyed the sail, I know I enjoyed having them on board. 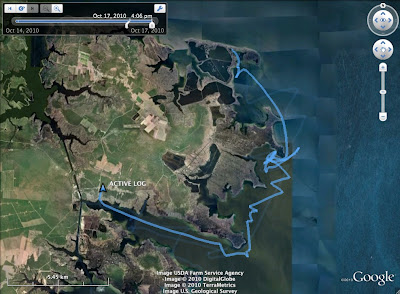 And then it was back into the bay where we swapped boats and I got a chance to sail Dawn Patrol. I guess I had a few questions myself, never having sailed a sprit-rigged cat ketch boat. Dawn Patrol moved along beautifully and tacking through the wind was great as she is a self-tending boat. What a nice sail, thanks for taking me out guys. 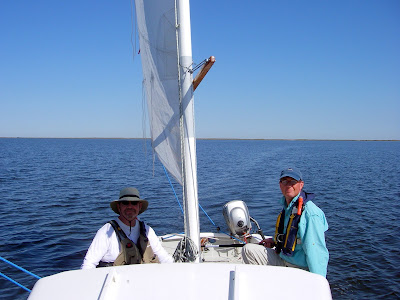 And then it was back into Big Porpoise Bay to get Spartina and we headed home. Dawn Patrol got a nice head start and left me in the distance. I watched the two sails of the cat ketch on the horizon, tacking beautifully towards Jones Bay. It was only later I found out that Dawn was at the tiller the entire time. Dawn, who was nervous about just the idea of sailing last spring, was now handling a sailboat with ease.

I entered Jones Bay with Dawn Patrol well ahead of me. The wind on the bay was out of the west. That would mean a few hours of tacking just to arrive at the boatyard at dusk. A little too late for me. So I cranked up the outboard and motored west, catching up with Dawn Patrol just off the boatyard entrance. Motoring. I know, I know. But after three plus excellent days of sailing I was ready to be on the road home.
I followed them up the ditch to the ramp where Shawn met us and we all worked together to haul the boats out of the water and break down the rigging. At 5 p.m. we were all loaded and ready to head to our homes. 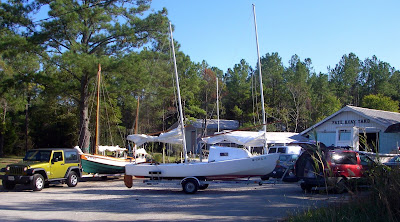 There were are, Paul, Shawn, myself and Dawn. It was a treat to sail with Paul and Dawn again. And it was great to meet Shawn, enjoy his company and hospitality. Thanks guys for making it a very enjoyable (long) weekend sail. We ought to do it again sometime.
steve 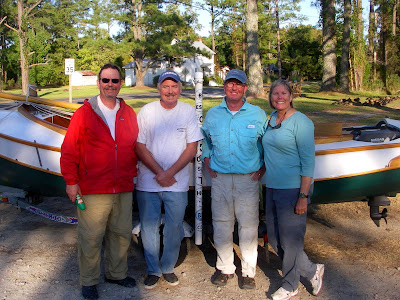 Thanks for sharing these excellent posts. Hobucken and Jones Bay do make a great place to launch some amazing days of sailing.

The dictionary entry for "generous hospitality" ought to show a picture of Shawn welcoming folks to Pate Boat Yard --THE undisputed hub of social activity in Hobucken. Thanks, Shawn!

I learned from Shawn that the lawn grass in his yard is the home of both the ducks and the mosquitos. They both fly up when you walk out into the yard, but the ones that chase you are the mosquitos.