A cloudy night clears.  A few mosquitos come then go.  Calm and peaceful.  I wake to the sound of the birds in the marsh at 6:00, sun coming over the cord grass to the east and not a cloud in sight.  Sail off anchor 6:20. 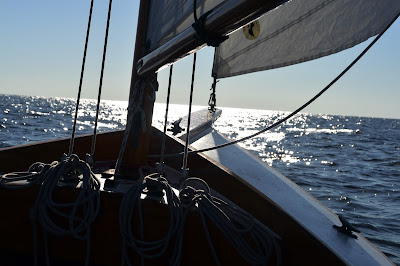 Bay Point at 6:50, light west wind and feeling the chop at the mouth of the Bay River.  I think about heading to Oriental but choose to sail due east to Ocracoke.  Navigation is easy, point the bow sprit into the glare of the morning sun.  The wind fails, under power at 7:25, motoring past the southern most marker on the military range out on Pamlico Sound.  A little wind and we try to sail, soon back to the outboard.  I see a marker where there should not be one and realize I had slid into the range.  Sunday morning with nothing going on so I am not worried, but I turn south to open water. 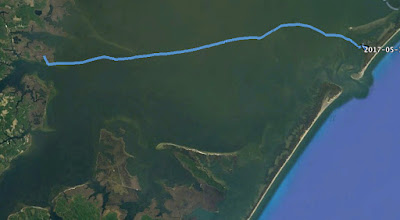 Brant Island Shoal marker ahead at 10:15, still under power and the tell tales hang limp from the shroud.  The only hints of breeze come from the south, not the northwest as promised by weather radio. 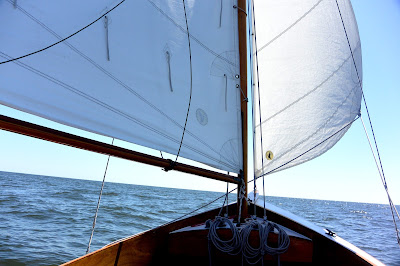 Enough wind to motor sail by 11:00, finally sailing at 11:15 with Royal Shoal marker ahead.  From the south comes the Cedar Island ferry.  I reach the shoal marker before the ferry makes the turn and then I stay close to the shoals - the shallows can easily be seen - knowing that I would be well out of the ferry's way.  I can hear the engines droning as the ferry passes by. 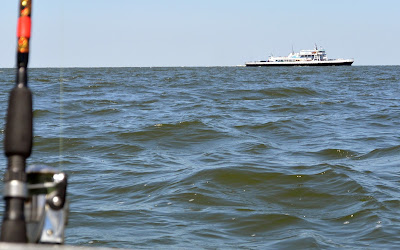 The water tower at Ocracoke shows above the horizon as I turn ESE towards Nine Foot Channel.  In the past I have always used the wider and deeper Big Foot Slough Channel, the same channel used by the ferries.  I decide to thread the needle of the well-marked but narrow entrance of the Nine Foot Channel, reducing the time and distance I would have to share water with the large and fast moving ferries.  The wind - there always seems to be wind at Ocracoke - fills in and we are making 5.4 toward marker "9" with a pair of sleek silver dolphins cutting through the water. 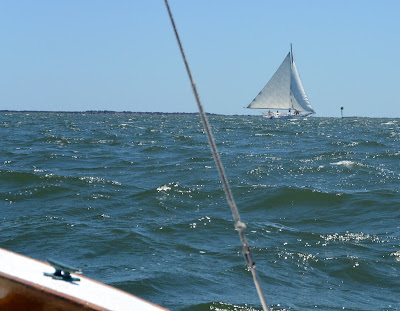 Into the Nine Foot Channel just after 1:00, surfing at 6.3 knots with the gusts on the beam.  Steep chop.  The channel leads across the shoals and joins with Big Foot Slough Channel where Spartina sails closer to the wind.  No ferries in sight so one less thing to worry about.  Soon we are on the east side of the channel with the shoals coming closer and closer.  I try to tack away to find more room but as Spartina comes through the wind the steep chop slaps her back to a starboard tack.  Twice more I try to come about with the the same results.  I harden up the sheets and decide to try and skirt the shoals just as skipjack Wilma Lee raises her sails on the far side of the channel.  I expect my Ocracoke friend Rob would be on board and look forward to seeing him on the island.  The shoal gives way to deeper water and I cut across the last few markers to the Silver Lake jetties. 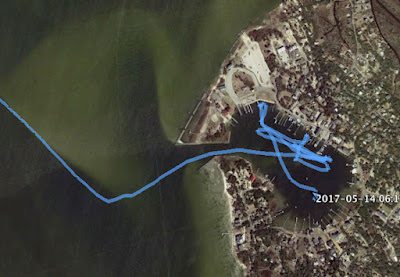 I tie up at a dock behind a hotel, the owner saying the pier is just for guests at the hotel - insurance reasons, he says - but with a grin he says he doesn't know me and doesn't even know my boat is there.  I run next door to the top of the fuel can then cast off from the dock where I'm not known and didn't tie up, motoring the the park service docks where Rob shows up to say hello and offers to help with the lines.  I pay by the foot for Spartina to tie up even though I'll be anchoring out overnight.

At the Jolly Roger pub I sit in the shade enjoying a few glasses of iced tea, then head to Dajio's just down the road for a late afternoon lunch or early dinner of a bland caesar salad, surprising because I have had so many good meals there over the years.  Not thrilled with the meal but happy to be on the island. 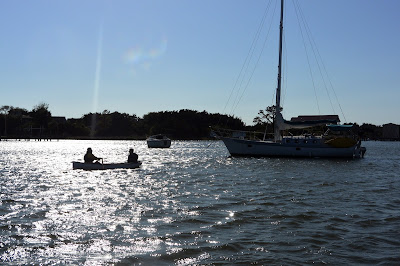 With winds gusting 20 to 25 I cast off from the park service docks and drop anchor inside of the bigger boats at the east end of Silver Lake.  A couple rows by in a dinghy, the woman saying I have a cute boat.  I gently correct her. 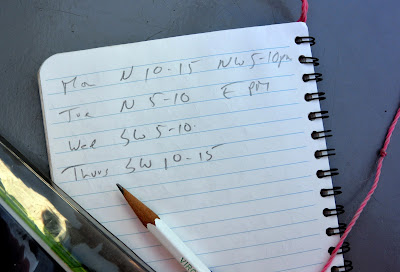 Strong winds are forecast overnight, out of the southwest to the early morning hours and then swinging to the north before dawn.  Listening to the forecast I jot down the winds for the next few days.  I'm not sure where I will be heading next, the winds will help me figure that out. 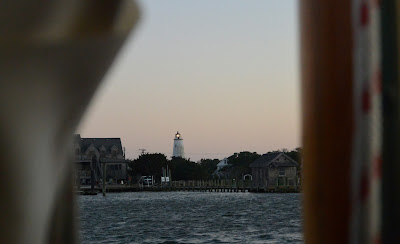