I was out with the Coast Guard today for work. I used to get out on the water a lot more as part of my job, but not so much these days. But it was nice to join the crew of the USCG Cutter Seahorse for a run out past Cape Henry to the Atlantic Ocean. 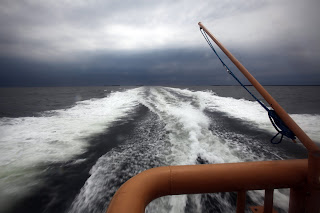 You never know what you'll see out there. Today it was a nuclear powered submarine. What kind I don't know. Maybe a Los Angeles class fast attack submarine, I believe there are some based at Naval Station Norfolk. What you see there is called the "sail" of a submarine. I've heard people call it the conning tower, but in military terms it is the sail. 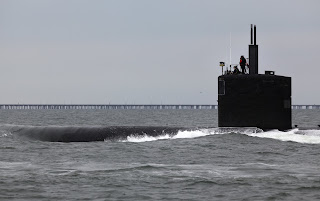 I did get some of the crew to answer a small boat safety question I've had for a long time. It was about the flares required on the boat. I purchase a new set when my current set expires. My instinct was to carry both the new flares and the expired set of flares. Is there any problem carrying expired flares on a boat? They said they were fine, in fact it was a good idea to have as many flares on board as practical, as long as there were enough - three - current flares. So I'm in good shape there. And I hope I keep my track record of never having to use one of them. 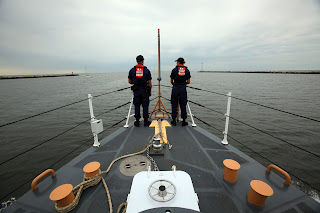 Nice seeing a woman on board, as well ;)

She was a very interesting woman. Just out of boot camp and said she loved every minute of it. "Can I do it again?" she asked when she finished her training - something heard not too often. I get the feeling that she was a water rat, raised around the water, loved being on the water. (Remind you of anybody you know Kristen???)

Steve, I asked that same question one time and was told having the old flares on board was fine as long as they and the new ones weren't stored together. The reason was if you only had a chance to fire one or two, they wanted to make sure they were the new ones with the best chance of not finding a weak one or a dud. The old ones can them be used as a back-up if the initial ones don't bring a response.

That makes perfect sense. Thanks James.