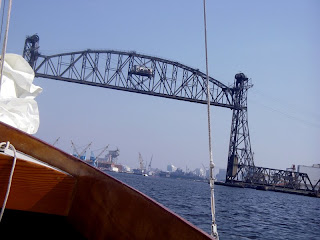 I probably had my last daysail before the June cruise today. Hot, humid and gusty. It reminded me that we'll be doing the sail a little bit later than usual and it probably will be hotter than what we've experienced in the past. But we'll deal with it and, I'm sure, have a great time.
I had to launch at a different ramp, this one on the southern branch of the Elizabeth River. My usual ramp, on the eastern branch, was being used by the fire department for training. The guys apologized when I drove up with the boat on a trailer. I mean, come on, I want to go sailing. And what are they doing? Training so that they can risk their lives to save mine. I guess that's ok.

So I launched on the southern branch and ran a gauntlet of the shipyards, warships and industrial waterfront to get to my usual sailing area. I sailed right by the old Naval shipyard, the one that the union destroyed at the beginning of the civil war, scuttling all the ships including the USS Merrimack, to keep them out of confederate hands. The confederates raised some of the ships and rebuilt them. The Merrimack became the ironclad CSS Virginia and went on to fight the battle of the ironclads with the USS Monitor. I wanted to take a photo of the shipyard but have learned the hard way that it is not a good idea to point a camera at the place. 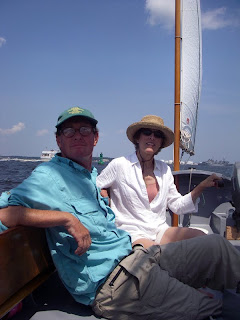 A couple of special guests on board today as I was joined by my wife Liz, above, and our longtime friend Patricia, below. We worked with Patricia a couple of decades (ouch) ago in Texas. She lives up in northern Virginia now. It was her first sail ever, very nice to have her along for the ride. 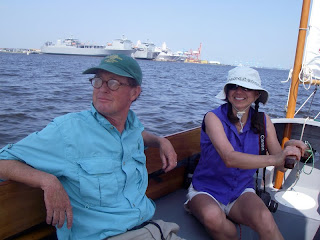 I will steal a quote from SandyBottom when I think about the nearness of our upcoming cruise. "YIKES". The trip is very close and there are a lot of things to do, a lot of little details to take care of. There has been a flurry of emails from Spartina to Dawn Patrol the last three or four days, talking about plans, routes, town, etc. I was just thinking this evening that the four of us will be making this trip together with just one conversation between myself, Paul and Dawn. That was back in November when we said "maybe we should do a sail together." All the other "discussions" have been by email or looking at each other's blog.
I thought I had been doing a good job of planning but then Paul sends me this great map, below, showing routes and alternate routes, it came with an accompanying file with all the waypoints plus a list of distance from one point to another. Thanks Paul. I'm glad somebody is doing some planning. 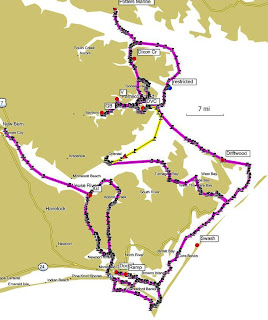