I've been emailing with Dawn about fresh (frozen) food supplies for the trip. It seems easier than having to resupply along the way. Bruce and I've used a combination of a soft sided cooler stored within a soft sided cooler to keep the meat frozen. The past couple of cruises we've used a block of dry ice inside the smaller cooler to keep the baggies of frozen pork, chicken and beef frozen. Now that I think about it I might bring some frozen shrimp too.) Added to that are frozen bottles of water, both inside the smaller cooler and inside the larger cooler. The system has worked very well. On the Crab House 150 the cubes of sirloin were still cold after seven days on the water. 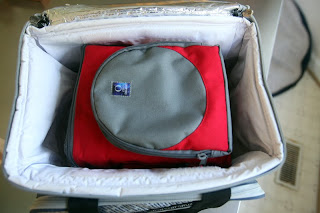 On this trip we'll skip the dry ice and just use frozen bottles of water. The advantage here is that we can refreeze the bottles of water when we stop in Oriental and Beaufort. (When the dry ice evaporates it is just gone.) I think this will work just fine. 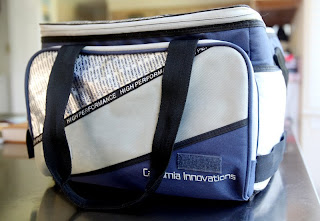 The larger cooler serves as a little fridge. For the first days we'll have the beef and frozen peas in there for the first night's dinner of beef stew. We'll also keep a small head of cabbage in there for, as Bruce has pencilled in on the menu, fish tacos. (He has already sent back a bottle of El Torito Cilantro Pepita Caesar dressing for the tacos, I think my job will be to catch the fish.) 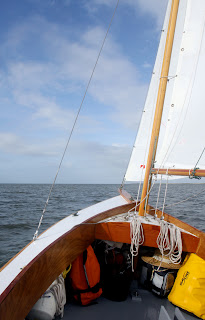 You can see the cooler under the foredeck, beneath the staw hat in the photo above. And a closer look at it, at the right, with all the other gear below.
The other option for fresh food is fishing, and we'll do some of that too. And another thing I would like to try is buying some fresh caught food off of a waterman. It would be nice to catch a small shrimp boat at the docks and hand over a few dollars for some shrimp. 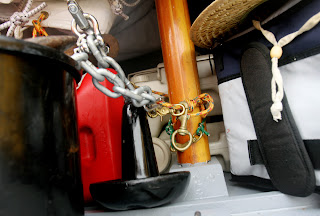 Getting ready for the trip always reminds me of our '07 trip when we spent a day and a half packing, then the better part of the day driving down to Harkers Island in a heavy rain (having to pull over to bail out Spartina on the highway), getting a flat tire as we arrived at Harkers Island Fishing Center and then rigging the boat and loading in the rain. Once all that was done I realized I was so consumed with all that stuff that I hadn't bothered to look at the sailing plan for the next day. So I dug out the chart book to figure out where we were going. 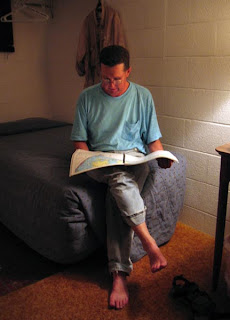