Home-bound for much of today as we had a "cable guy" come by to do some work at the house. It was a good time for me to work on the gear for the trip. The weather is great today but I wouldn't have been sailing, the river is tied up with the annual Harbor Fest celebration (photo is from last year). 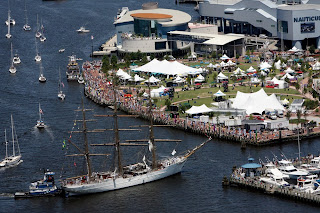 I finally mounted the compass Mom gave for my birthday (thanks Mom!) on the centerboard trunk. I've waited until now to do it because the compass has a couple of adjustment screws to compensate for nearby metal (in my case the steel place centerboard). I figured it wouldn't be accurate until the adjustments were properly made. With Bruce along we'll sail a course and I'll get him to tweak the compensation screws for me. 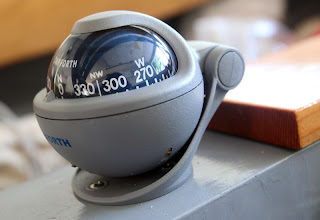 I replaced the spark plug on the 3.5 hp Nissan two stroke outboard. The old plug had been in just since the beginning the sailing season in March, it was still in pretty good shape. I'll save it as a spare, but I do like to start a cruise with a new plug. I also checked my supply of shear pins and cotter keys, put a couple of bottles of two stroke oil in with the engine kit and traded out the one gallon fuel can I use for daysailing with a two gallon can. We've never used much fuel on a trip but I like to have two gallons just in case I need it.

I laminated my cheat sheets and satellite photos and replaced my rite in the rain all-weather note book with one that has plenty of unused pages. We used that to take notes on speed, location or whatever throughout the day then use that information when we write in our logbooks in the evening. 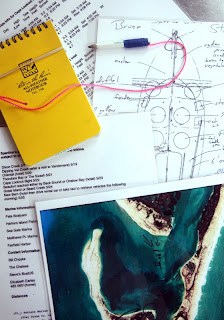 I've been wondering what hat I should wear on the trip. In the past I've worn a straw hat. But with two of us and all the gear on board hats tend to get wedged in place here or there and that is tough on a straw hat. I found this long-bill cap with a sun shade on the back tucked away in my sailing gear. I had bought it years ago at a tackle shop in Ocracoke and never really used it. I think it'll be much sun hat for this trip. 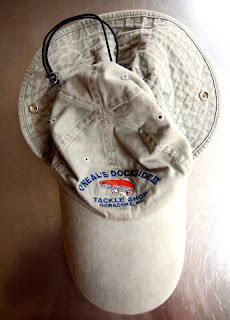 Canned food (tuna salad for lunches), cups of fruit, breakfast bars and trail mix are all in good shape. Below are three of the one-gallon jars. We take a total of six jars, three in each side of thwart. We carry a fair amount of weight in food between these jars and the cooler I mentioned yesteday. But hey, it tastes good! We will have the basic survival foods on board including smoked oysters and anchovy filets wrapped around capers. 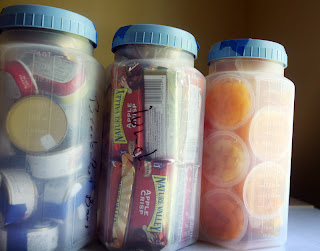 I did forget to mention yesterday, when talking about fresh food, that we do have a mesh hammock up under the foredeck where we carry the fresh veggies. Peppers, carrots, potatoes, mushrooms, garlic and shallots will be kept there. 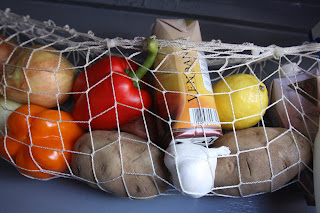 I consider packing part of the trip. I almost feel like I have left the dock already.