There are a lot of nice things about Potters Marine just outside of Bath, NC. It is on a nice protected little creek, has a great ramp and a convenient dock. But the nicest thing is that big pine tree that gives you plenty of shade for rigging a boat.

Bruce and I left out of Chesapeake, Virginia at 5:30 a.m. on the first day of the trip. Probably earlier than we needed to leave - Hwy. 17 has been improved so much that it was an easy drive and we arrived at the marina at 8:30 (a trip that included breakfast in Hertford and a gas stop in Washington). We took our time in the shade of the tall tree rigging the boat, checking the fittings and then packing all our gear for the eight day trip on the sounds, rivers and bays of North Carolina. 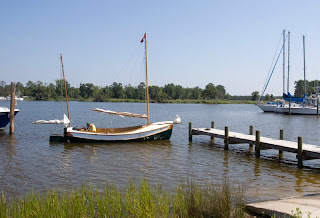 We had Spartina in the water and ready to go but waited dockside for our sailing partners, Paul and Dawn Stewart, to arrive. Relaxing at the marina was just fine with us, the first day's sail was just a dozen or so miles. No need to rush. After all we wanted to say hello to them - I had met them just once briefly months before, Bruce had never met them. Just as I parked my jeep they rolled into the parking lot towing their Core Sound 20 Dawn Patrol. We chatted a while, talked about the anchorage for the evening and then Bruce and I cast off about 11:30. 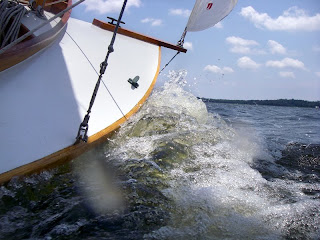 We decided to tack across the river behind Indian Island guessing (correctly for once) that we would still have a nice breeze but less chop behind the island. Below is the gps track from both Spartina and Dawn Patrol as we crossed the river. They came out on the river about an hour after we did. You can see that we made a long tack all the way to the southern shore while Dawn Patrol made a series of shorter tacks. This was pretty typical for the cruise. I tend to like long tacks. Paul was more strategic in his decisions and went with the shorter tacks (the first lesson in sailing tactics from Dawn Patrol). 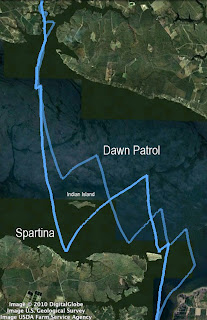 Both the wind the and chop picked up toward the mouth of the Pamlico but it was an easy sail. At 2:25 Bruce and I made one last quick tack at Reed Hammock and entered Goose Creek and the ICW. The wind was crisp as we sailed south at up to five and a half knots, great sailing on smooth water. 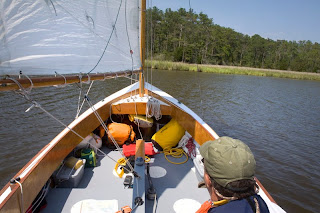 At 3:30 Bruce starting tacking in towards our first anchorage, a place we came to call faux Dixon Creek. The true Dixon Creek is about a mile to the north. But when Bruce and I arrived there a year ago, wet and exhausted from a 33 mile sail, I misidentified this tiny little anchorage as Dixon Creek. It was only a week before this trip that I discovered my error. So for us it became faux Dixon Creek. Regardless of what it is called, the spot is a great anchorage. A narrow tree-lined entrance leads to a shallow cove surrounded by marsh grass, trees and Spanish moss. Even in a high wind it is a quiet, peaceful spot. 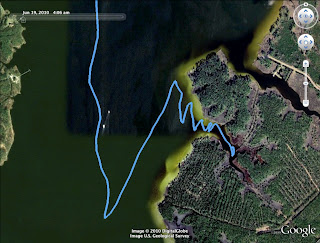 Once anchored it was time to get to work. We had invited Paul and Dawn to join us for dinner aboard Spartina on the first evening out, Bruce would be fixing our traditional first meal of beef and vegetable stew in red wine. Dawn Patrol was bringing bread and wine to round out the meal. My job was to chop the carrots, potatoes, onion, mushrooms and and garlic. 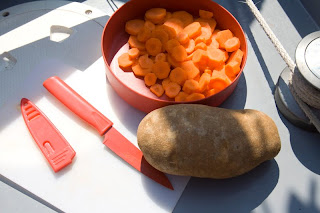 About 45 minutes later we looked out over the marsh grass to see the beautiful cat ketch rig of Dawn Patrol coming down the canal. Bruce signaled with a horn to indicate our position but they had already spotted our mizzen sail (which is always left raised unless at the dock). Dawn Patrol tacked in under sail and then motored into the tiny creek. 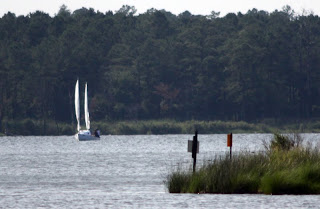 I've got to say it was a great evening. The weather was fantastic. We all talked about the day, compared boats and got to know each other. That first evening out was the only time we had really planned on spending together. But it was so interesting and enjoyable to talk with Paul and Dawn that we ended up spending every night of trip together. We hit it off just fine, a great way to start the trip. 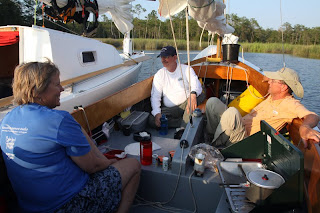 After appetizers, dinner, a little wine, a little beer and a lot of great conversation Dawn Patrol cast off and moved to an anchorage about 100 yards away. Time to put the cooking gear away and break out the bivy's for the night. 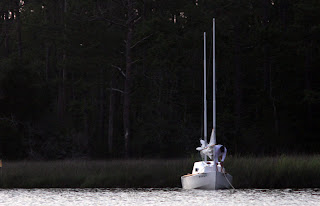 Hey Guys!
Those "green heads" can be absolutely vicious! I was at Chincoteague once and they were so aggressive they were literally attacking the car as we drove through the camping area!
Check out this link:
http://askville.amazon.com/world-repel-deer-flies-Ahhhh/AnswerViewer.do?requestId=2852994
Looks like a great trip! Hope I can get my Mariner down there sometime.
Steve Hock