It was not the first time that I had fallen for gentle curves, but never had I fallen so hard.  With the tattered relationship now at end I can only look back and wonder how I let myself be deceived for so many years. 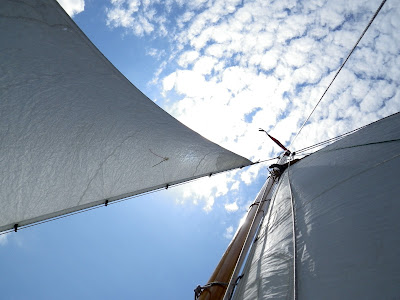 If the sails had any flaws I could not have seen them - I was blinded by the brilliance of a reflected sun.  I was young, naïve and thrilled to have a set of sails cut just for me.  Main, mizzen and jib, they were made for me and only me.  And I was made for them. 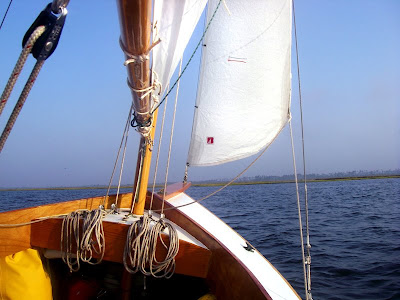 But it was whispers amongst friends – and this is how you know who your real friends are – that told me that something was not right.  Questions about details and measurements, doubts about sail cut and shape.  These whispers I did not want to hear.  Stuart talked of misgivings.  Seth said there were better sails out there to be had.  And Barry, he was already urging me to move on. 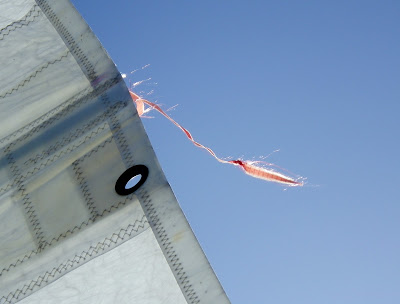 “HOW COULD YOU THINK THE SAILS ARE WRONG?” I raged.  “Haven’t I told you how we danced together along the edge of the rich green marsh, caressed white sandy beaches and shared the rhythm of the bow rippling through calm waters?”  It was all so right.  How could anybody – especially people who call themselves friends – find something wrong with that?

Stuart pushed back with questions about the leech and luff, grommets and goosenecks.   He wanted the details.  “I DON’T KNOW,” I shouted, turning away to hide my shame.  “I just don’t know.”  In anger I picked up the sails and threw them at him.  “Take them” I said, “tell me what you find.” 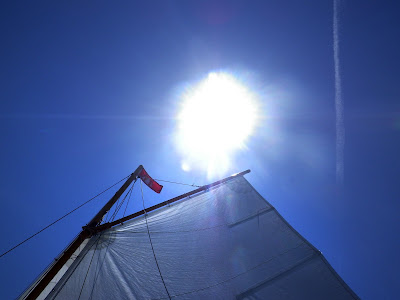 The intervention was done with clinical precision, like a passionless doctor calmly saying the condition was terminal.  The sails, the ones I had trusted so completely for so many years, were wrong for me.  I was in a state of disbelief until Stuart grabbed some pencils and sketched out the ugly truth.  The main, the one I had fastened to the boom and gaff many years ago on a clear cool spring day before Spartina’s hull ever touched the water, was shy of luff and short of leech.  The gaff angle was too narrow, the diagonal too long.  The roach was not deep enough and the reefs were all wrong.  Simply put, these sails were imposters.  Beautiful, beguiling imposters. 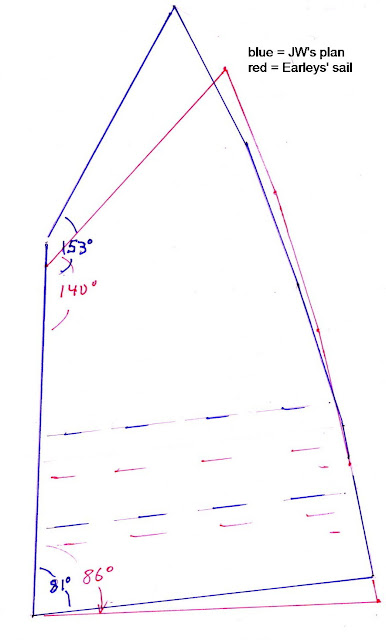 This was what I got for being too trusting.  Looking at the sail plans, looking at the numbers, I felt betrayed.  I thought of us - sailor and sails - as being one for those many years on the water.  Riding out the storms, ghosting in the calms – life felt so good I never bothered to ask the hard questions.  Ignorance is bliss, and this was a beautiful bliss.  Yet confronted with the evidence I knew I must move on. 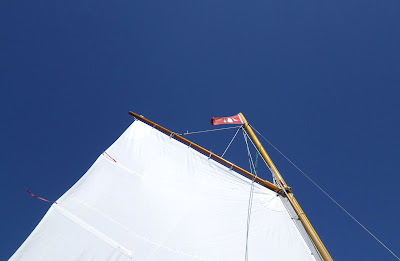 Barry, both counseling and consoling, said a new relationship was the best thing to make me forget the last one (saying that with a wistful look as if he was speaking from experience).  I knew he was right, but I also knew that it could be weeks, maybe months before forging that next bond.  It will be a long, cold and dark winter.

Years from now I hope I will be able to look back and forget the bitterness and anger over the deception.  We did have some good times together.  The sails did have their flaws, as I had mine.  Maybe that’s what brought us together.  After years of sailing, we found, the stresses took their toll.  The relationship began to fray and the romance unravelled like the stitching on the main.  Then one day, unsuspecting, we were done.

Across bays and down rivers, offshore of the beaches and through quiet peaceful marshes, we did have some special moments together.  And that’s what I want to remember.

Do you mean John Welsford got it wrong??

What a great piece of romantic writing!

Mmmm, that extra aspect height should help a bit going to windward. Catch a little more of the fast moving air up high, too.

I expect you'll feel a bit more power out of this new set once the cloth relaxes and they settle in, and you may appreciate the deeper reef points.

This new girl may be a noticeably better dancer. Something to look forward to.

no, I don't mean that at all. There are a few details my sailmaker will change, but really it was another sail loft that appears to have cut the main markedly differently than the plans they were given. But then again, I've sailed a couple of thousand miles and routinely exceeded hull speed with the incorrectly cut main. So go figure.
From my point of view I've have good performance from the original sails, will get better performance from the new sails.

O I get it.. the first set of sails were the lower cut sails, the new ones have the high peaked main, made to JW's sailplan—nice! The new sails will be lovely when hoisted aloft I'm sure.

If the old sails only "didn't work" when compared to the new ones, and if you sailed thousands of miles with the old set, seems to me that they were just fine. They certainly pulled Spartina beautifully through the watery wild for many years.

The real question is: what will happen to them? I wonder if Stuart could recycle them into a light-air drifter, or a topsail!

That is an interesting idea. I had not thought of that. In any case Stuart will hang onto the old sails as a reference for the new set.

A high peaked gaff main, like on Welsford's sailplan, is hard to mount a useful topsail on. Spartina's old main, with the gaff set at a more traditional angle, is a better shape if you want to set a topsail above.

But hey, if we're going to get crazy with Steve's boat, I vote for an asymmetric spinnaker hauled out on that bowsprit. Bruce will have a blast getting launched off the foredeck trying to set it. ;-)

I have two old sails that have been accumulating dust in my garage for a couple years, and in Googling around for ways to unload them, I discovered this outfit that uses old sails to make bags. If you send them your old sails (they will pay for shipping), they will send you one of their bags, free.

I have zero connection or interest in the company - just an idea. My wife likes the idea, because the sails will be recycled - and she will get two of their cool bags.

That's an interesting idea. I'll check it out. Thanks!

Steve, excellent..you will not be sorry.

You know Steve I always thought that the Pathfinder main was peaked higher, but when I sailed alongside you I just figured I was remembering it wrong. Now you know.

Because the gaff is peaked so high on Slip Jig I had to put a rope hoist on the jaws onto which the haliyard shackle attaches. I originally had the shackle right at the jaws and it pinched between the mast scarring it up a bit.

sounds like you knew the Pathfinder better than I did. Then again, it was a long time before I got a good profile look of her sails. Oh well, they seemed to work ok. The next ones will be even better.

I do have a patch of hardwood up where the jaws rub on the mast, and there is leather (now worn) on the jaws. I will adjust when I get the new main.

thanks for the advice