Now that I can see the light at the end of the tunnel called winter I need to start planning a little more seriously for the spring cruise.  Below you will see the two options for the first day of the trip down and around the southern end of the Delmarva Peninisula. 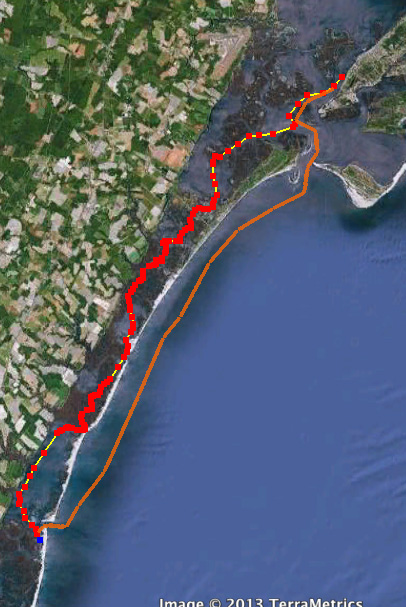 The day would be from Chincoteague to Wachapreague Inlet.  Our preference would be to go outside and sail down the coast on the ocean.  For that we would need a nice breeze from somewhere out of the north, anywhere from northwest to northeast.  If the ocean is too rough or should the wind be out of the south we'll need to go inside of the barrier islands, a tangled series of channels and cuts through the marshes that would most likely involve motoring.  Going inside would be scenic no doubt, those marshes are beautiful.  But sailing on the ocean just off the beach pretty spectacular. 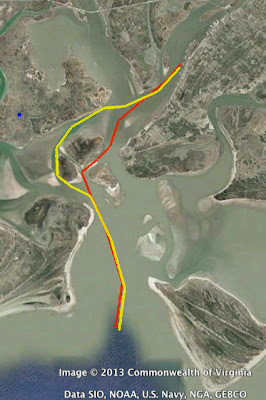 Creating a series of waypoints I noticed that leaving Chincoteague is not as simple as I had thought.  I have stood at the edge of the harbor at the south end of the island - Harbor of Refuge it is called - and thought it was a straight shot out to the ocean.  Not so, I now see.  The navigational chart shows the red track above, one that cuts through the island/mash marked as Chincoteague Point.  That cut, though, looks very shallow and I have to wonder if it would be better to circle behind the marsh and go out on what appears to be a deeper channel.  I need to research that some more. 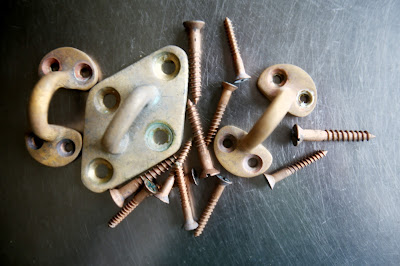 After a final coat of varnish Friday evening, when both the sun and the temperature went down quicker than I wanted, I found myself ready to start putting the hardware back in place.  I have to say if felt very good to drill into the mahogany plugs and drive the silicone bronze screws into place. 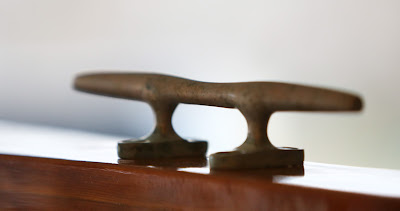 Spartina is starting to feel like a boat again.  I just put a few pieces in place - the bow cleat, above, and the fitting (don't know what to call it) for the bobstay, below.  I had several more pieces to put in place but the rain and the wind and, eventually, the snow arrived.  Adding the rest of the hardware will be a treat I'll save for this coming weekend.  The bigger treat may be raising the new sails for the first time. 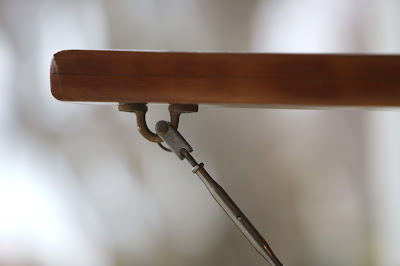 Yes, the light at the end of the tunnel.  I can see it now.