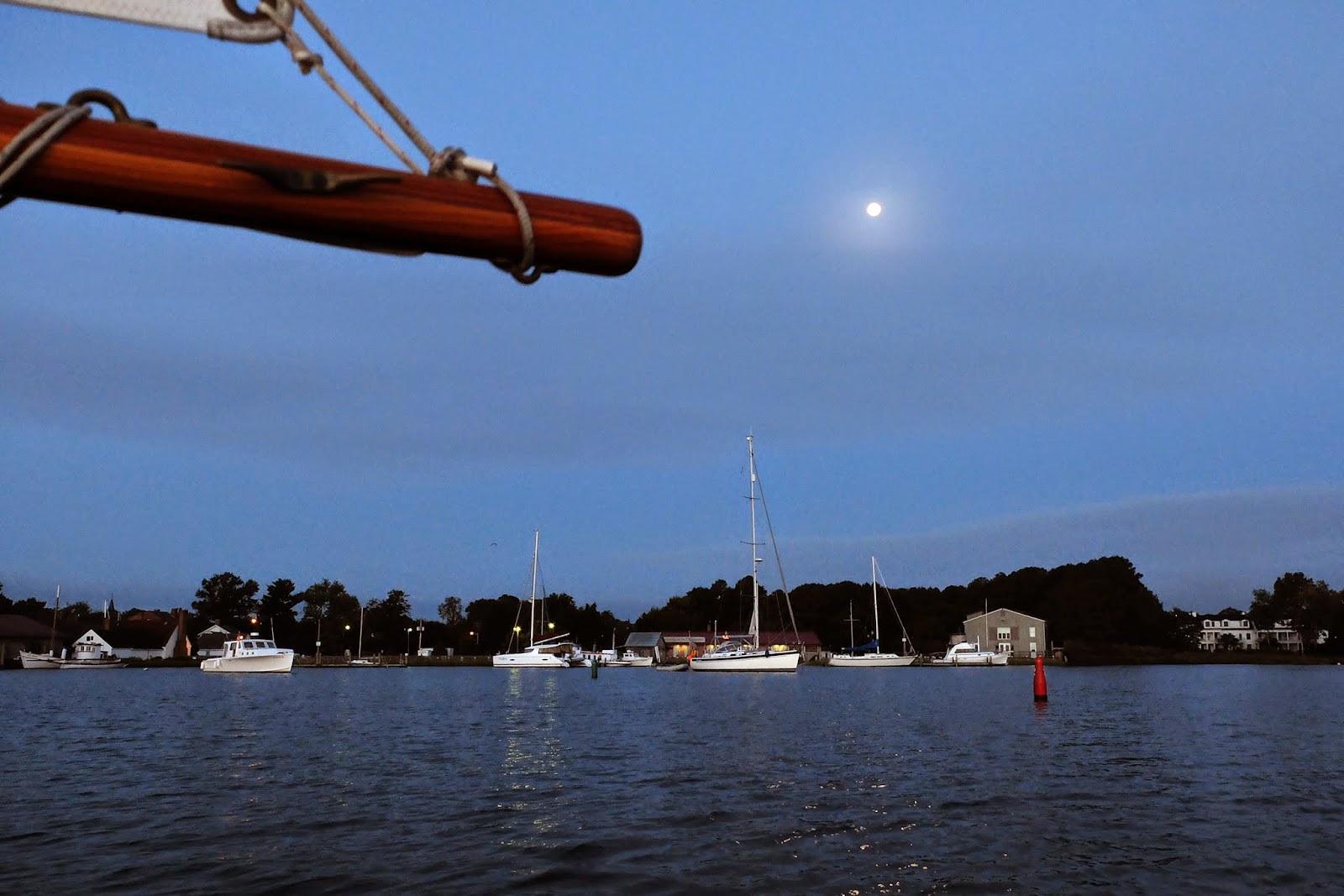 Awake before dawn, schools of tiny baitfish snap around Spartina's hull and a full moon hangs over Tilghman Island.  We slip away in darkness, the light of the old Hooper Strait Lighthouse glowing over the Chesapeake Bay Maritime Museum.  Leaving the harbor in a north wind, clouds across the Miles river are backlit by the rising sun. 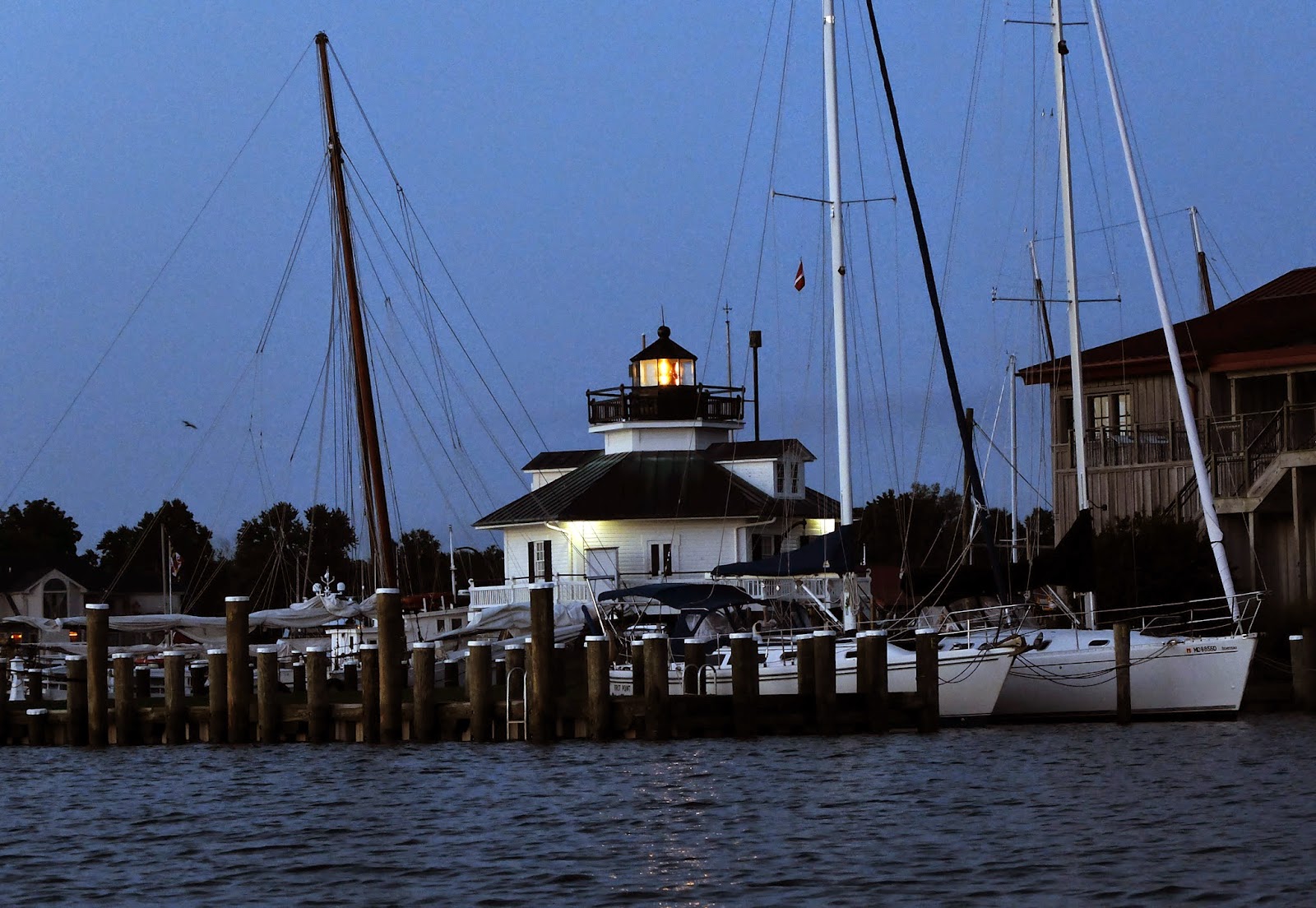 The winds falls off, then fails.  Motor sailing I don't notice a skipjack, the H.M. Krentz, motoring up from behind us.  How can I be surprised by a boat 70' long?  The skipper waves as they pass by and head up the river. 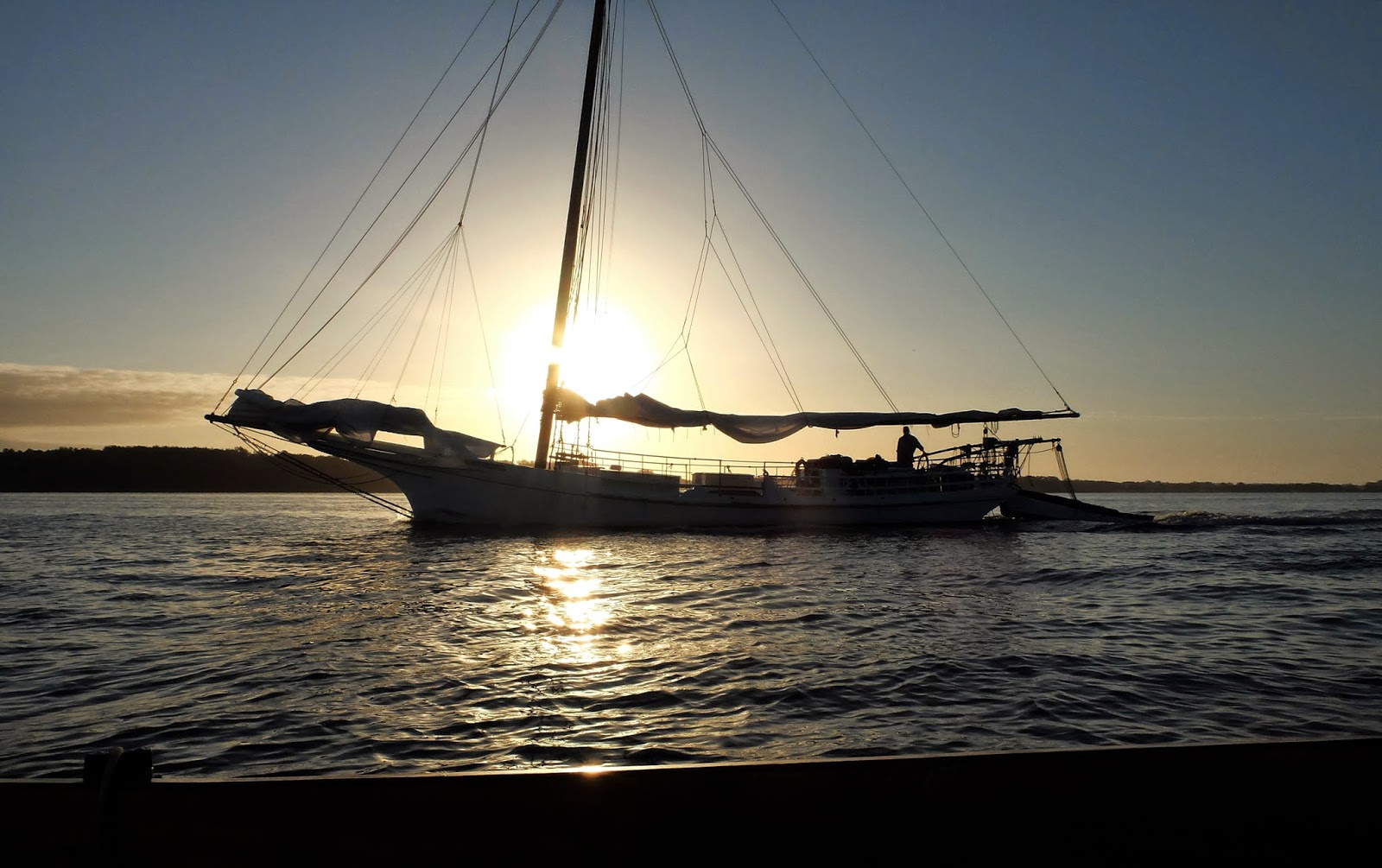 The wind carries us on a single tack along Tilghman Island, an interesting looking ketch out of Easton following in our wake.  Tilghman Point, two days earlier a place of steep chop, muddied water and a threatening shoal, is peaceful and easily rounded this morning. 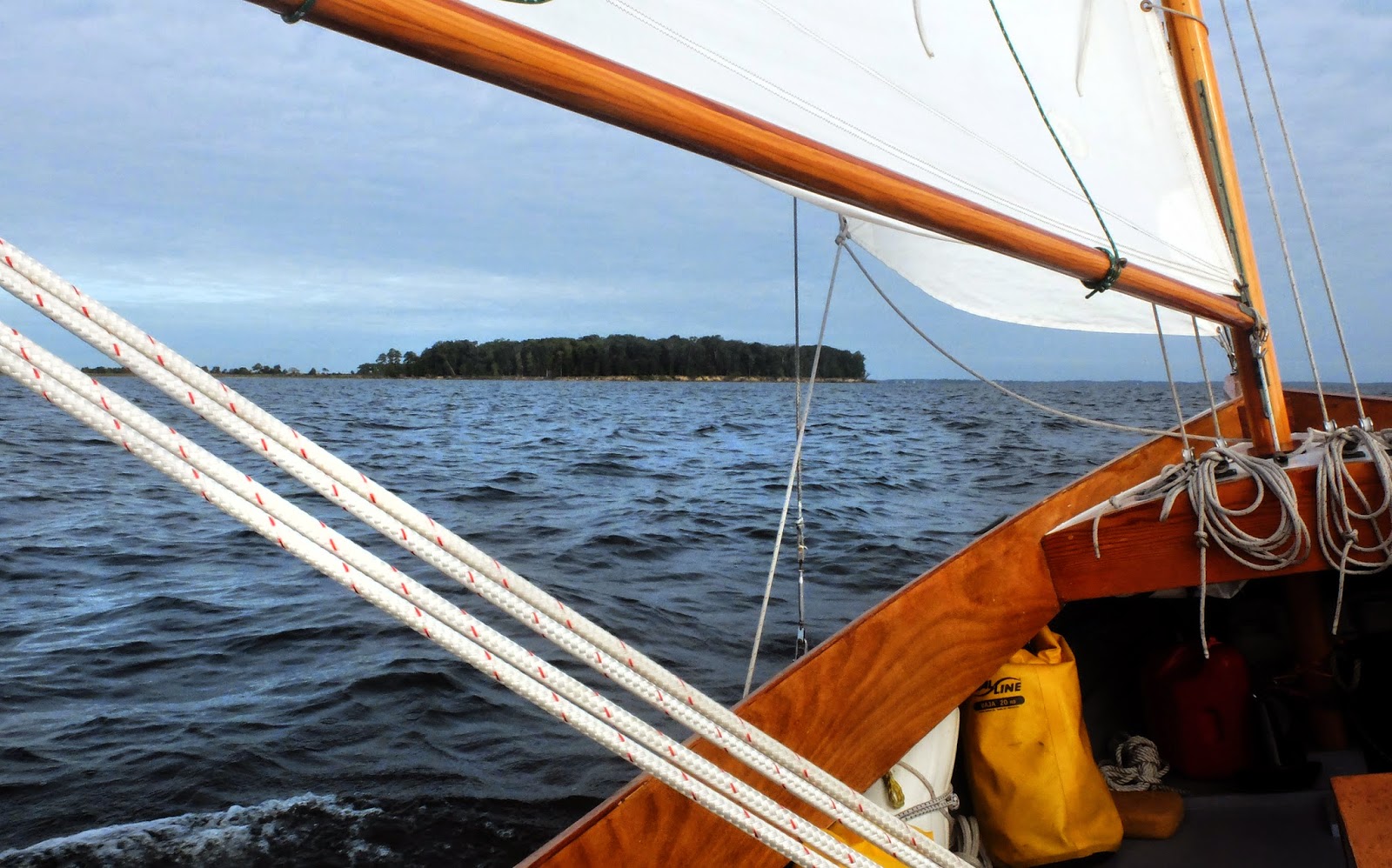 Around the point headed south we sail wing and wing in the island's lee, the heat of the day coming down on Spartina's decks.  The boat gently rolls, white sails leaning back and forth against the blue sky. 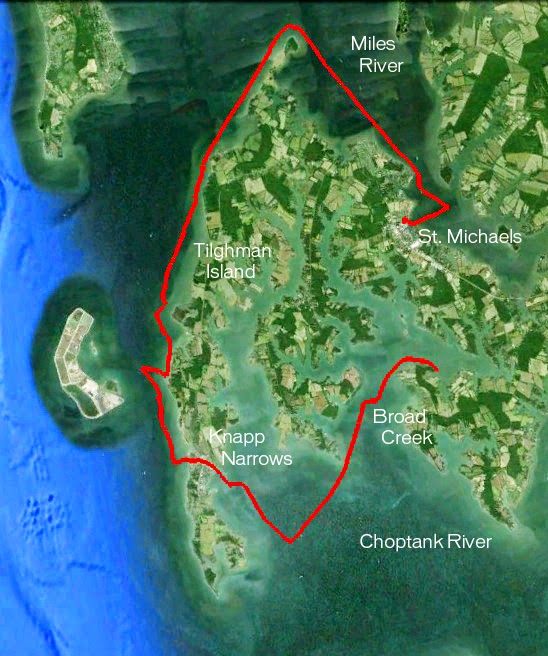 We are off the old ferry docks at Clairborne by 10:30.  Wind drops and we make just one and a half knots I don't care.  It's a pretty day.

The wind comes and goes late morning, under power and then under sail.  At Punch Point we are just yards off the beach, tacking out into Poplar Isalnd Narrows where the wind fails completely. 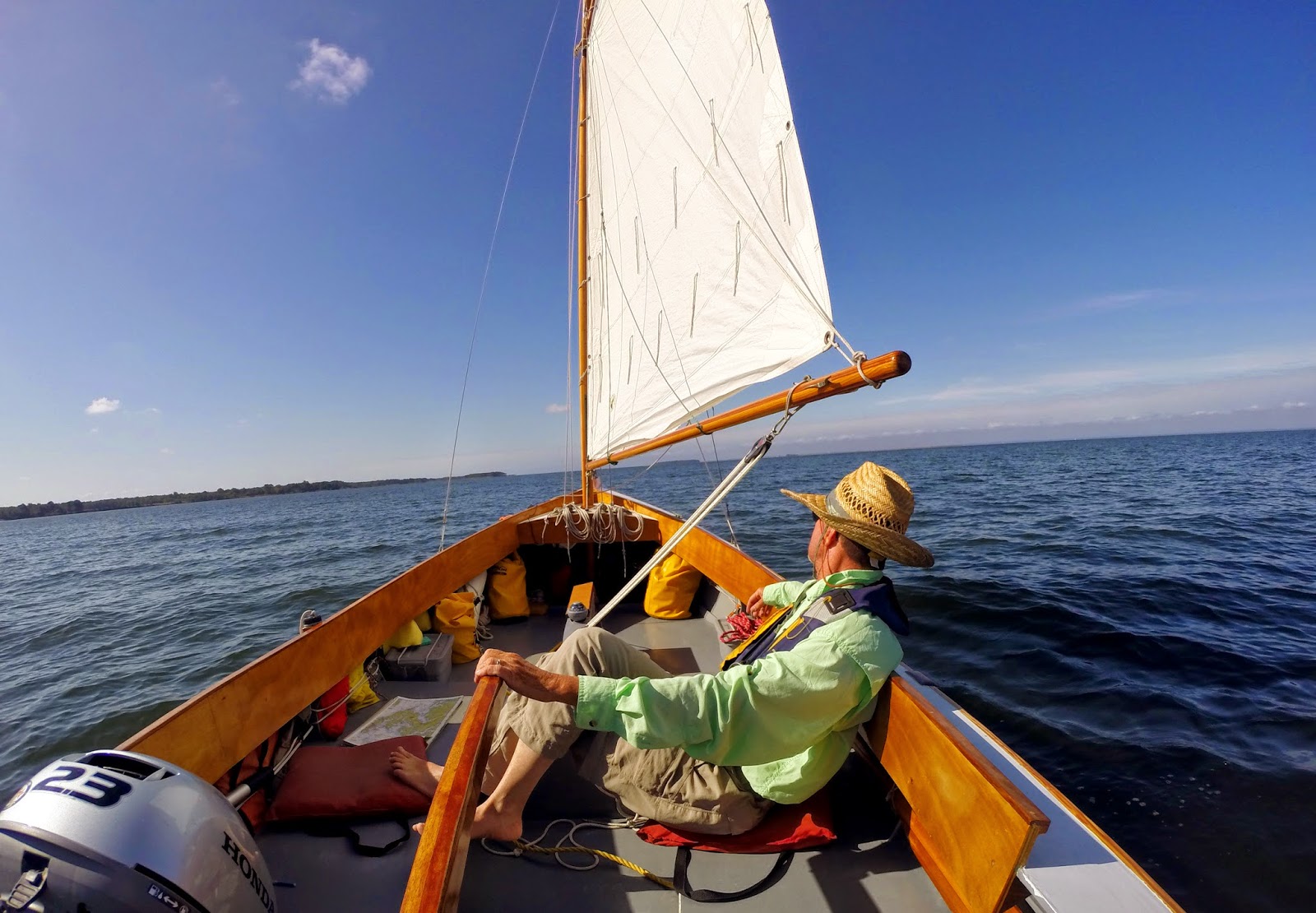 Under power we head for the Knapp Narrows entrance markers, a nice batch of oysters at a waterfront restaurant sounding like a good idea.  In the narrows the water is clear, clouds of baitfish hover in the shadows of the pilings.  Old work boats and shiny sport boats are tied along the channel.  I tie up at a restaurant and ask for oysters.  I'm told they are out of season, which surprises me since I just had a batch yesterday.  I settle for a caesar salad and a glass of iced tea.

A power boat arrives with two men and two women aboard, they sit at a table on the far side of the open deck.  One woman has a voice loud enough for all four, and she likes to use it.  Tired of hearing her talk, I finish quickly, pay my bill and cast off from the dock.  Before I can call for a bridge lift the bridge begins to open for a  charter fishing boat coming from the other direction.  I decide to go through on the same lift but the bridge tended doesn't notice me until he starts to bring down the bridge.  No problem as I'm not yet under the bridge.  I push the tiller over to round up just as the bridge tender sees me and lifts the bridge again.  Over the radio he tells me "Next time tell me your coming!"  "I will," I tell him, and I apologize for not doing so this time.  Lesson learned.

The Choptank is glassy calm and reflects the afternoon heat.  I try to sail south to Cook Point but make no headway.  I motor sail in that direction for a distance, only to realize it will be a long hot afternoon before I get there.  We turn back north towards Broad Creek, the wind teasing and then failing.  We motor up the creek with Balls Creek and Steve's Cove to port.  Beyond that is Leadenham Creek, also to port, and Edge Creek to starboard.  At Cedar Point we turn to follow the shoreline of Edge Creek, dropping anchor in the shade of a tall stand of trees at the mouth of Elberts Cove. 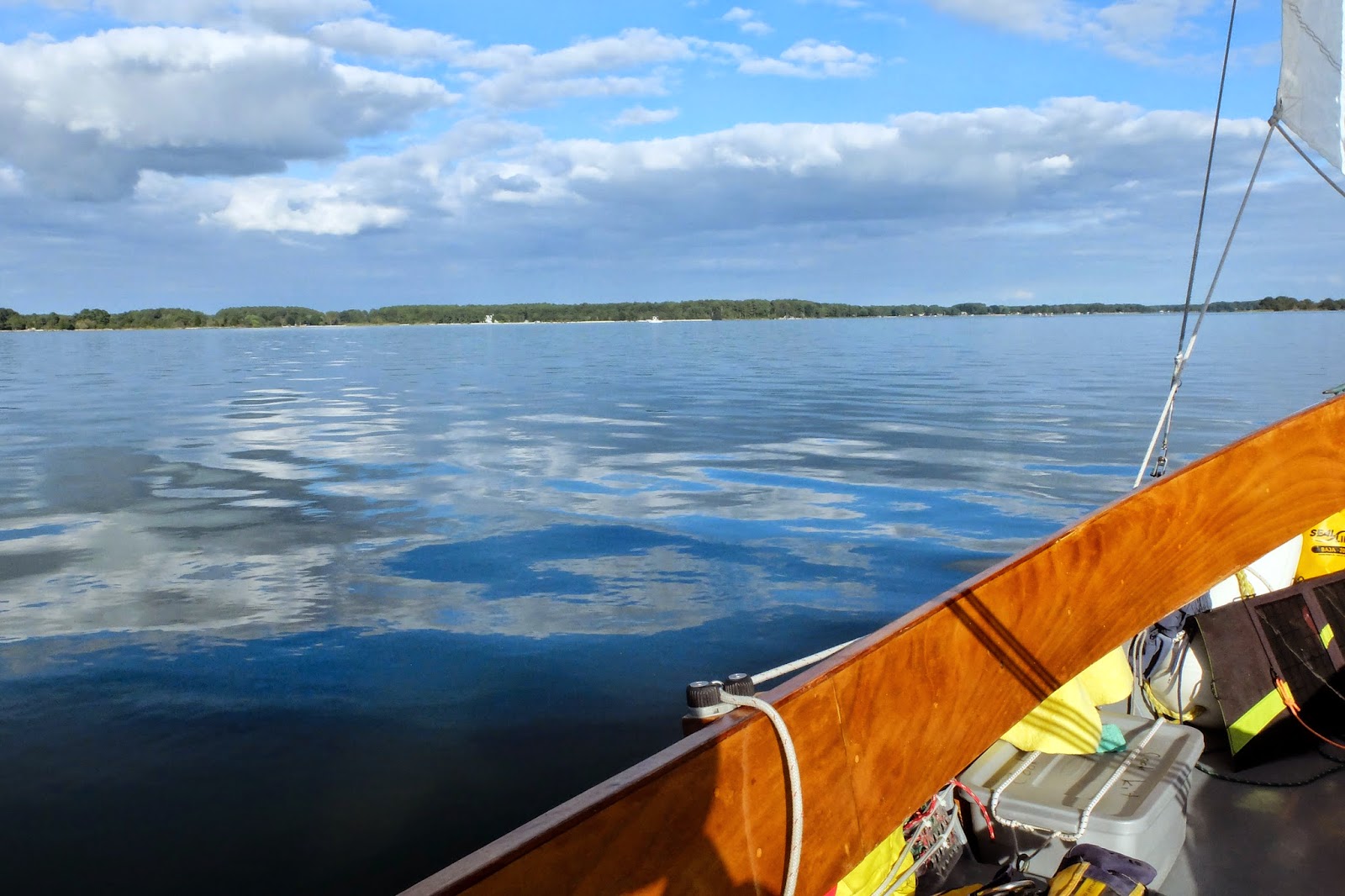