Update from Barry:  After beating into headwinds for 24 hours, with stronger headwinds on the way, they realized that they would not make it to Portsmouth by the finish deadline.  (This same situation might apply to other schooners in the race.)  They put in at Solomons Island, will drive down to Portsmouth for the party (can't miss that) and then return to the boat.  I hope to catch up with Barry on the Portsmouth waterfront tomorrow. 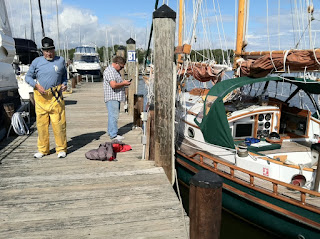 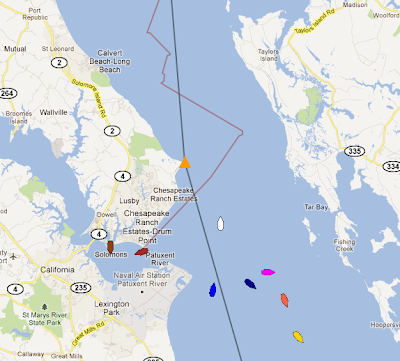 I was on board the Norfolk Rebel for a schooner race a few years ago when we made a similar unscheduled stop at Solomons Island for maintenance.  I had the good fortune to be aboard the tugantine (a sail powered tugboat) as the guest of owner and race founder Lane Briggs, below center.  It was an interesting trip, no wind to start with and then a ride so rough I had to brace my shoulders in the bunk to keep from falling out. 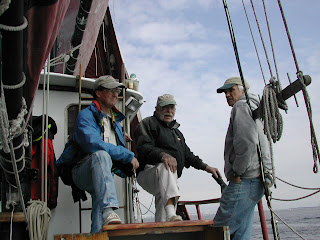 I remember a hot, windless afternoon when they talked about putting out the anchor so we would not drift back to the north.  I remember pounding through the waves and the spray coming up over the bow.  And I remember Lane inviting me into the galley for an early morning "spot o' tea" as he called it.  (I usually don't drink rum before 9 a.m.)
It was an honor to sail with Lane.  It was his last race, he passed away the following winter.  But his good works and spirit live on. 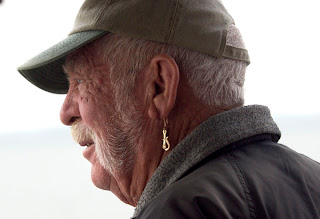