During my sail last weekend I tied up at Waterside marina for a quick lunch.  The marina is right downtown, an easy and convenient place to tie up with a $5.00 rate for one or two hour stay at their finger piers.
I motored around a very large power boat to an open slip, turning the corner to find several people associated with the power boat sitting in deck chairs on the dock.  They were having a little party on that beautiful afternoon.  I apologized for interrupting with the sound of my outboard.  "No problem" said one man as he came over to catch my lines.  "Say did you build that boat?" he asked.  I told him I did, then thanked him for his help tying up.
As he returned to the gathering I could hear him tell the others that I had built Spartina.  Then there was a woman's voice telling someone else about building the boat, saying I was "just like Gibbs". 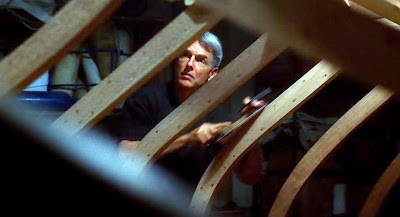 I do not watch much network television so I did not understand the comment until the woman explained to her friend "he's the guy on NCIS that is always building that boat."  The guy on the show, I knew from the women in my household, is Mark Harmon.  My wife and daughters refer to him, apparently because of a character he played in an earlier series, as "Dicky".  Yes, "Dicky".  And I do recall glimpses of him in his current show working on a larger and more traditional boat than Spartina.  His eccentricities for the role include working on a boat and slapping people in the back of the head. 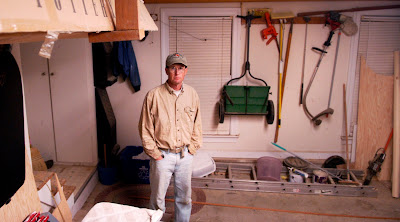 Could we have more in common than boat building?  Good looks?  Maybe not.  That is me above in my boat shop (garage), photographed by my daughter Grace around 2006; and below is Gibbs, or Mark Harmon, or "Dicky", as the sexiest man alive circa 1986. 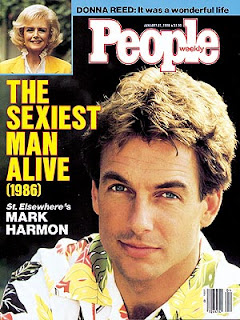 So it is just boat building we have in common.  And I may have him beat there.  As the woman on the dock said to her friend who compared me to Gibbs, "at least he (meaning me) finished his boat."

ps - Paul, don't even think of photoshopping one of your magazine covers
Posted by Steve at 7:54 AM

And I bet Mark Harmon doesn't have a weed-whacker either.

Hi Steve, that is a funny story..nice post. I know of Mark harmon & NCIS, but I've never watched it..whoda thunk they had boatbuilding worked into that show???

I am thinking about building a stitch & glue kit boat from plans & provided materials as a dink for my Catalina 30 from a place in the PNW. It is a nesting row boat, but has a sail plan and a transom to handle an outboard. I'd buy the sail kit but not the outboard parts.

Unfortunately, I have lots of other things higher on the 'list' right now, but if I had my druthers, that is what I'd be building for myself, now.
-Shawn

Stitch and glue can be a lot of fun. The earlier version of Spartina was stitch and glue, a devlin design Nancy's China, went from sheets of plywood to a hull in a matter of days.

Steve, just to follow up...here is a link to the PT nester. - http://www.ptwatercraft.com/ptwatercraft/Welcome.html

Hope you made it sailing on 27 Nov. Today was our last local Frostbite race so we were out in mid-Chesapeake..weather was puffy, but absolutely phenomenal for late November!

Ah, but Gibbs did finish the boat. It ended up as a murder scene. (Have never missed an episode ;)

A great source of information on equipment AND television shows.......thanks for the crime scene info, i'll get my daughters to track down the episode.