The unsettled weather has stayed in our area past its welcome.  High winds, thunderstorms and heavy rains Saturday.  Isolated thunderstorms roaming around Sunday.  And more of the same today.  I was fortunate to find a few hours on both Sunday and today to get out on the water and somehow avoid the storms. 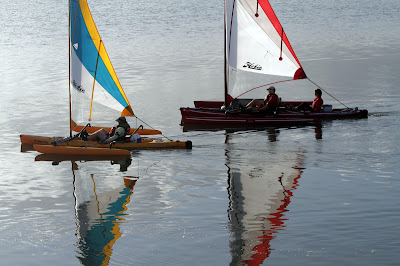 I drove over to the Lynnhaven River Sunday morning to meet Paul Kral and Chris Bower.  I needed to take some photographs on the river and they very kindly offered to help out.  And to add to the fun, Ruth, Paul's wife came along too.
The early morning drive to the river was in a steady rain, but the skies cleared as I got to the ramp and we had a perfect morning for sailing.
Paul is a watertriber known as DogsLife.  He has competed in two Everglades Challenges and some NC Challenges.  His boat of choice for competition is the Hobie Mirage Adventure Island.  For yesterday's sail he brought his tandem Hobie Mirage Tandem Island, at right in the photo above, which had enough room for himself, Ruth and, for a while, myself.  The boat was very stable and made for a nice shooting platform. 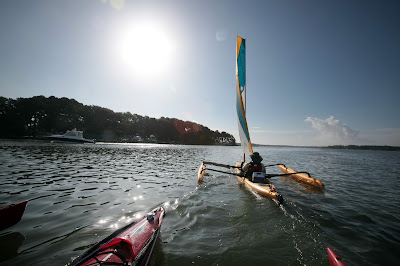 Chris, above in his Adventure Island, is soon to be a watertriber.  He's in training for this fall's NC Challenge.  Those Hobies are nimble and fast.  I really liked the idea of being able to "pedal" the boats when there was no wind.

I had a great time and got a few nice photographs.  These are a few outtakes from the shoot.

Paul, Ruth, and Chris, thanks very much for taking me out on the water.  It was nice to have met you all.  And good luck in the NCC. 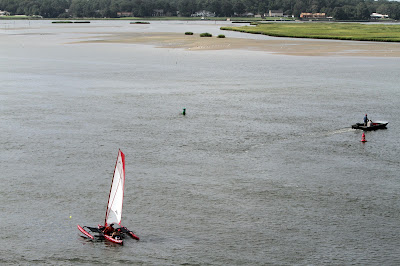 After our sail I went and had lunch at a nearby restaurant, a salad and a dozen Lynnhaven oysters on the half shell eaten while sitting on the deck overlooking the river.  Just as I finished the storm clouds moved in.  I drove home in the rain.

The weather was forecast to be clear by today, but somebody forgot to tell the weather. 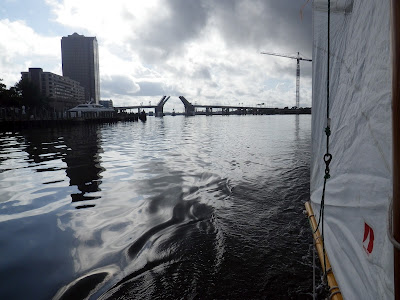 I drove down to the ramp in Norfolk with clouds hovering about and virtually no wind.  I didn't care, I just wanted to get out on the water for a while.  I rigged and launched, motored down river then, with no apparent wind, raised sail for no apparent reason.

After a while I motored over to Crawford Bay to anchor and clean up the boat.  I had not realized what great summer I have had until I realized today that it was the first time I was anchoring because of lack of wind.  Somehow I got through June, July and most of August with plenty of wind.  I got out the sponged and scrubbed the deck, bunk flat and cockpit sole.  Then a nice little breeze arrived. 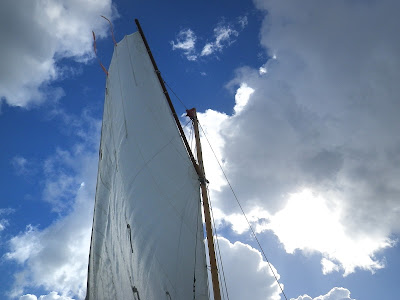 I sailed back and forth on the river in the light wind for a couple of hours.  It was nice and relaxing.  Then storm clouds began to roll up from the south.  I headed to the dock, hauled the boat and then drove home....in the rain.  Perfect timing for the weather window.

I finally made it up to my boat on Sunday. Hadn't even laid eyes on her for two months! The weather forecast looked "good enough" and my sailing buddy was available, so we said "let's go for it." Glad we did - we got some absolutely fantastic sailing!

When we first pulled out of the slip it didn't seem like there was much wind, but once we got out of the inlet, it was pretty good. The wind direction was perfect for a downwind run out of Hills Bay and into the mouth of the Piankatank, so we hoisted sail right away. Once we got out into the mouth of the Pianktank, there was a very menacing-looking cloud overhead and the wind vanished. After that cloud passed on to the north, it allowed the air to rush in behind it, and we suddenly went from maybe 4-6 knots of wind to about 16-20! And it stayed that way for the rest of the afternoon. We sailed at theoretical hull speed, and above. Saw 7+ knots momentarily a few times on the GPS. Some really great sailing. And all to soon we had to turn around and head back in...

good for you, sounds like a great day on the water. I got to get up and explore that area sometime.