I spoke too soon a few weeks ago when I told a friend I was glad we got through hurricane season without a storm.  I'll add that to my list of famous last words. 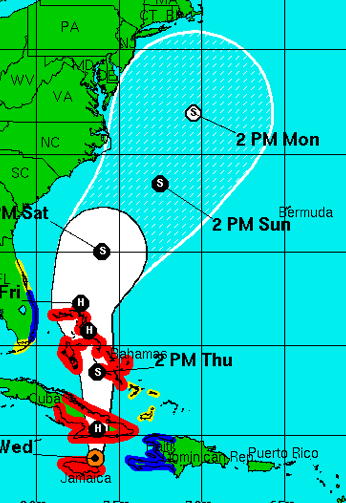 It is called Hurricane Sandy and I have already heard it referred to as "the perfect storm."  The late season storm (anytime you get a storm name starting with "s" it's going to be a late season event) is not yet the perfect storm but it could become one soon should it meet another weather phenomena coming across the continental U.S.  I'll let Dr. Jeff Masters explain in a quote from his blog...

"models are predicting that Sandy will get caught up by the trough approaching the Eastern U.S., which will inject a large amount of energy into the storm, converting it to a powerful subtropical storm with a central pressure below 960 mb and sustained winds of 60 - 70 mph. Winds of this strength would likely cause massive power outages, as trees still in leaf take out power lines. Also of great concern are Sandy's rains." 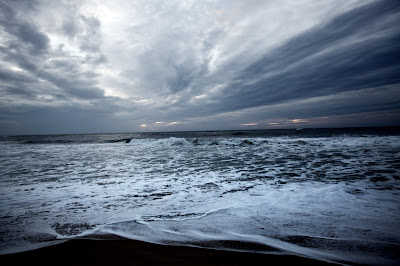 Dr. Masters also points out that another huge problem could be storm surge.  Tropical storm force winds could reach out 300 miles from the storm's center causing ocean side flooding as the storm approaches the Outer Banks and then sound side flooding as it moves north.  Add in the fact that Monday will be a full moon with tides at their monthly peak and, well, it could be a mess. 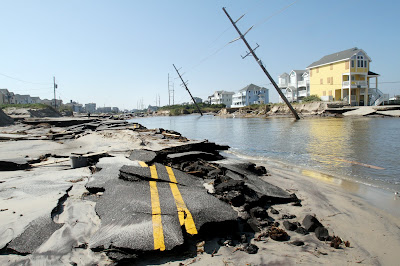 Or maybe not.  These storms are difficult to predict.  I've heard this storm's potential effect compared to that of Hurricane Noel which left five feet of sand sitting on Highway 12, the main road that runs down the barrier Islands.  But a delay in that trough or a shift in the storm's path could change things - for better or for worse.

Storm surge is a threat to narrow, vulnerable Hatteras Island.  Last year Hurricane Irene's storm surge cut through the island in two places - Mirlo Beach, in the photograph above, and again a few miles north at Pea Island.  The Mirlo Beach cut has since been filled in, but the ocean tide still runs freely through the Pea Island cut.  Storm surges seek out the weakest part of the island and quite literally surge over it and often through it.  That narrow cut at Pea Island, which is now crossed by a temporary metal bridge, could be turned into a gaping hole by this coming storm.  The population on Hatteras lives south of Pea Island, the bridge access to the mainland is north of Pea Island.  It would not be the first time the folks on Hatteras were cut off from the mainland by a storm. 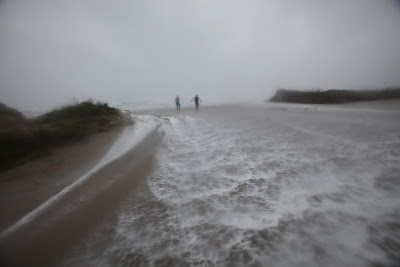 I have a lot of friends in Hatteras and I hope things work out for the best.  If I can get my ducks in a row I may go join them for the storm and see what happens.