lunch with Elvis, and other fine dining

Coming south out of the Lewes and Rehoboth Canal we entered Rehoboth Bay and caught a fine southerly breeze that carried us to the resort town of Dewey Beach.  We dropped the main as we approached the town's waterfront, searching under mizzen and jib for a place to grab some lunch.  Soon we were tied up at the long wooden dock that led us to the Rusty Rudder and a couple of the best hamburgers that we had had in a long time. 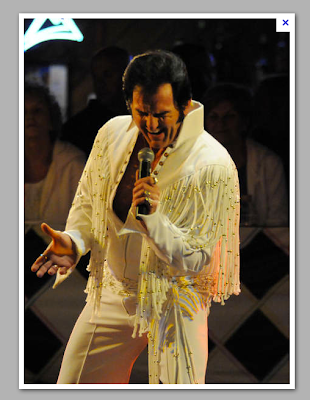 Enjoying our burgers I leaned over to Bruce to quietly mention that Elvis was in the room.  By chance we had arrived at the beginning of the restaurant's Elvis weekend and one of the impersonators was having lunch with a small entourage.  The Elvis near us was just one of three we saw that afternoon, though we heard that at least 19 more were expected.

Dewey Beach is not exactly my kind of town.  It appeared to be a party town, suited for a younger crowd.  Maybe I would have liked it in my college years, but probably not.  But I have to say that that burger was the best - I'm not kidding, they were big and juicy and cooked to perfection, served on fresh buns with excellent fries and a pickle.  Just one of many fine meals on the trip over the top of the Delmarva.

Later that night, anchored miles away in the shoals near Indian River Inlet, we could hear the voice of Elvis, or at least his impersonators, carrying across the water. 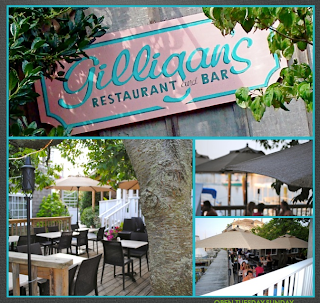 In Lewes we tied up at the town dock and walked to Gilligan's, a very fine restaurant on the waterfront.  Appetizers of tuna wontons and duck pot stickers followed by an excellent chopped salad, a perfect meal after a long sail down Delaware Bay.  We were back later that night for a cold beer - a hoppy Dogfish Head 60 Minute IPA brewed right there in Lewes - while catching an NFL game on their video screen.  I would recommend both Lewes, a very nice town (a little on the upscale side), and Gilligan's to anyone passing through the area. 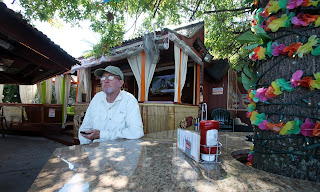 The same with the Chesapeake Inn at Chesapeake, City, Md.  We visited their outdoors deck twice on our afternoon there, once for appetizers and a beer, then later for a light dinner before casting off and anchoring out in the basin.  A great place to sit by the water (as if we didn't see enough water during the week) and enjoy a meal. 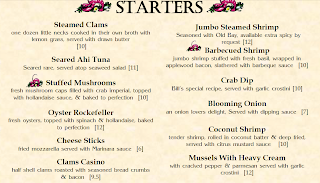 Some of the absolutely best food came at the end of the trip during our day and a half in Chincoteague. This was at Bill's Prime Seafood and Steaks, a place so good I would consider driving to Chincoteague just for a nice meal there.   Great atmosphere and service, wonderful fresh seafood right there on Main Street in Chincoteague.  Above is there appetizer menu, and it only gets better from there.  Oysters, mussels and shrimp - really great stuff.  And the oyster are local Chincoteague salts - they don't get any fresher than that.

When I think of this last trip I will think of great sailing, strong currents, the lively water of Delaware Bay and struggling to get through the tortured water of the inlets.  And I'll also think about some really fine meals.