Sandy is an interesting storm, also a deadly storm.  Over 20 people have died in its path.  The forecast is continually changing.  Earlier today the hurricane was forecast to pass off of the Outer Banks on Monday.  Now it is expected to be offshore Monday, turning inland to the mid-Atlantic on Tuesday.  No doubt the forecast will be different by tomorrow morning. 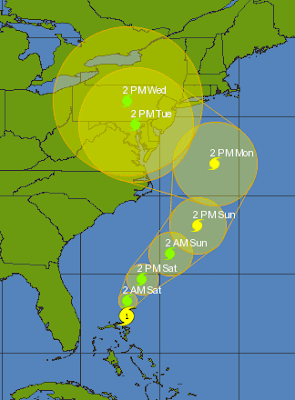 Below is part of the reason for Sandy not being a typical storm.  Sandy is moving north in this image.  Off to the left is a trough approaching from the west.  Typically that trough would be a steering current pushing Sandy out to sea, but at the upper right is a low pressure system.  Early next week Sandy will be squeezed between the trough and the low pressure system.  The results?  We'll find out in a few days. 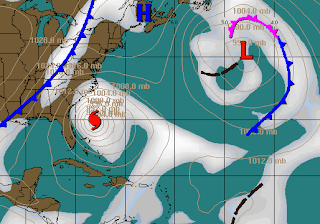 I'm in Woodstock, NY right now, and will be driving back to Richmond, VA tomorrow - an all-day affair. No chance to make the trip up to Mathews to check on my boat, so whatever it is right now will have to be good enough. It's insured - but for what I paid for it a couple years ago, which is much less than what I've currently got in it. But what will be will be...