The idea of adding more gear to Spartina makes me cringe, the idea of running out of batteries on a trip and not being able to take photographs makes me cringe even more.  So I don't really know.  I'll have to think about it some more.

Below is a photograph I shot sailing into Crisfield on the the fifth day of a sail, with a dying battery in my camera. 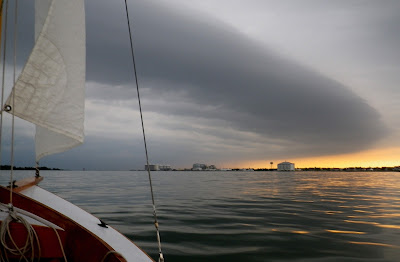 Power for recharging batteries on Spartina has been an issue for years.  The cameras these days aren't so much cameras but really computers that seems to constantly drain their small batteries one way or another.  I've gotten to where I carry six batteries for my waterproof Pentax Optio W90 camera and even then I worry about running out of power on a week-long trip.  Often times when I go into a port to have a lunch, I'm going to the restaurant for their AC outlets as much as I'm going there for a sandwich and a glass of iced tea. 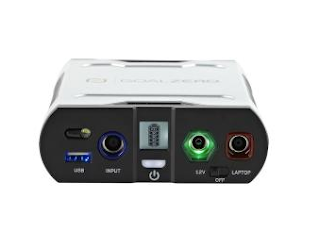 I have looked for reliable, compact and affordable solar power for years and may have finally found it.  I don't think I'll jump into all this year, but will buy (or at least consider buying) the system in a two-step process.  The first piece of gear would the Sherpa 50 power pack from GoalZero.  This battery pack, which can be charged by using AC power (wall outlet), 12v car adapter or solar panel, should give me the ability to recharge my batteries several times while out on the water. 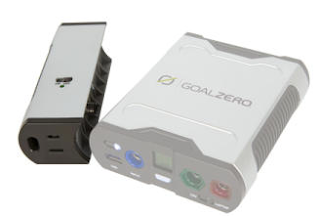 There are cheaper power packs out there, but one issue I've run into is that other power packs are set up to charge devices - mostly cell phones, tablets - through a usb cable.  At least two types of the batteries I use can only be charged with a 110v wall outlet.  GoalZero has this ability as you can see with the optional inverter above that attaches to the side of the Sherpa power pack.  Cost of the power pack plus inverter is $250.

Getting the power pack with the inverter would be step one for this year's fall trip.  At least I think it will be - I want to research the device, read some more reviews.  But right now the reviews I'm finding are all pretty good. 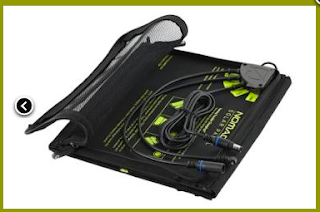 Step two of the process would be (might be, we'll see) adding next year a Nomad 13 solar panel, which is designed for charging the above power pack.  Apparently this is a new version of an older, less successful solar charger.  The reviews on this newer version have been very positive.  Cost is $160. (Waiting a year to buy might allow for additional improvements in the technology.)

At the very least I am glad to see that solar power is becoming more reliable and more affordable.

It never occurred to me that you could run out of juice for your cameras between ports.

Hi Steve
I carry the small,12v battery from my 4 wheeler with me when I go on extended trips. Granted, I am only charging my I-phone but it works well and is relatively small and light and I have never had to recharge it before putting it back into the 4 wheeler. I don't know whether this would work for your camera but thought I would mention it.
Chip

I guess my question is how would I put a plug into the battery? Electricity is something I don't really understand and I'm not sure how I would run a 110 v charger off a 12 v battery.

You wouldn't use a 110v charger. Buy a car charger - the type that plugs into your cigarette lighter (12v). Buy a power/cigarette lighter outlet, which you can get for a couple dollars at any car parts store.

Hook up the cigarette lighter outlet to the battery, and you've got a place to plug in your charger.

"Bringing Dead Batteries Back To Life Is Simple!"

"Save Money And NEVER Buy A New Battery Again"

"Bring Nearly Any Dead Battery Back To Life Again"

Over 19,000 people are already using the EZ Battery Reconditioning Method

And it doesn’t matter if you’re not technical or don’t know the first thing about batteries …because our course is incredibly easy to follow and absolutely anybody can use it.

For more info please click on the following link: "Bringing Dead Batteries Back To Life Is Simple!"