The canvas ladies arrived on schedule, in fact a few minutes early, this morning just as I finished putting the old boom tent on the fully rigged-as-if-for-sailing Spartina.  We spent a fun and interesting hour talking about both old and new tents, part explanation, part negotiation and part collaboration.  They were insistent that would would make the tent exactly as I wished, but also just as insistent on sharing thoughts and ideas, which I welcomed.

They complimented me on the polytarp tent, ignoring the crudeness of my work.  They thought the original tent, made in a couple of hours with $60 of material and help from my neighbor Jim, was cut well enough that it will serve as a pattern for the new version. 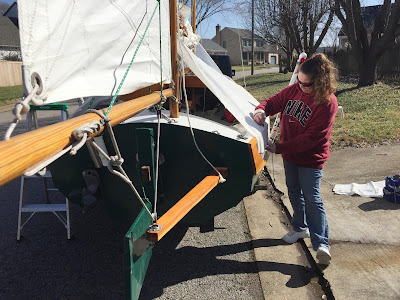 The biggest discussion involved the forward end of the tent.  An issue was their instinct to close everything up at tightly as possible.  I countered that a) I would want a steady flow of fresh air coming from the forward end and b) the simple fact that with a small boat on the water for a week or two rain water can and will find its way aboard.  The goal is not to stop all the rain, it is to minimize exposure to the weather while at the same time having a tent that is simple and quick to put in place.

The complicating factor for the forward end are the four lines - three halyards and topping lift - plus the mast.  It is hard to wrap canvas around all that.  The solution, which came from the canvas ladies, was to extend the tent forward to the peak of the coaming with a diamond-shaped cut out that wraps around the mast and lines (this extension is drawn in red in the photograph at the top of this post).  A "fly" (drawn in blue) will go in front of the lines/mast to block a good percentage of the wind/rain.  Yes water will come in, but hopefully less than what comes in now.  I feel very good about this design.  (The angle of the photograph at top is deceptive.  There is ample room for the tent to go from the forward hook on the lower rub rail to the peak of the coaming without interfering with the fly being attached to the deck cleats.)

They offered me several options, most involving adjust straps, velcro, zippers, which I declined.  I like things simple.  They did offer to sew on reinforcements at potential wear areas, which I accepted. 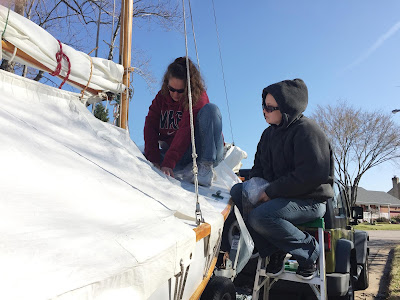 After the canvas ladies left, taking the original tent with them, I broke down Spartina's rig.  While doing so I noticed tiny white flecks spread all across the cockpit sole and bunk flat.  The polytarp tent is disintegrating.  I needed a new tent whether I knew it or not.  I cringe at the money spent, but I smile when I think of setting up a fine custom made tent on a rainy night.

Coolest and driest! Looking forward to the final result. Color?

Beige, looks good with the green hull. Can't wait to see it.