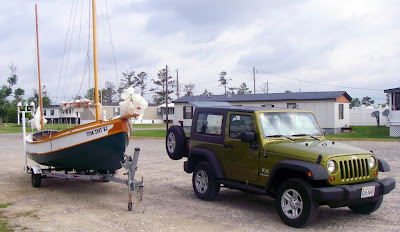 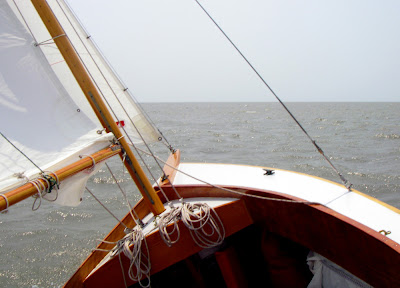 I got an email from Bill Moffitt the other day about this summer's exploratory trip in advance of the 2010 OBX130.  I'm signed up to sail the 2010 event, but told Bill I could not make it for their test run this coming July.  Part of that is that I've got a family commitment, the other part is that late July strikes me as hot and buggy for a sailing trip (those guys are tougher than I am).  The 2010 event will be my first ever group sail.  I usually like to head out as a single boat.  As I told my wife and friends many times,  I built Spartina just so I could get the hell away for everyone else.  But I do like the sailing area for the OBX130 - Core Sound, Cape Lookout and Pamlico Sound - and Bill and his sons sound like great guys.  It will be interesting to travel in a group, kind of cool to see other boats on the water.
There are some other trips that interest me.  My favorite is the Everglades Challenge.  That 2009 event is just three weeks away.  These guys are very serious.  Here is how their website describes the event: The Everglades Challenge is an unsupported, expedition style adventure race for kayaks, canoes, and small boats.  The distance is roughly 300 nautical miles depending on your course selection.  There is a time limit of 8 days or less.  Your safety and well being are completely up to you.  Unsupported means that there are no safety boats or support crews to help you during the race.  You are not allowed to have a support crew follow you or meet you during the race.  It is OK to have family or friends meet you at the official checkpoints, but they cannot provide anything other than emotional support.
I don't think I'll ever compete in the event.  A Pathfinder isn't the right design for this event, plus I would rather take my time, read a book, take a nap or cast out a lure.  But I do enjoy following the event on the web.  The last couple of years I have followed via the web a couple of kayakers from my neighboring state of North Carolina - Kiwibird and Sandybottom.    Although they are kayakers and I am a sailor, I learn quite a bit from the way they train, the equipment they use and their mental approach to journeys on the water.  Someday I hope to sail that stretch of the Florida coast from Tampa to Key Largo, but I don't think it will be in a race.
Another trip, one that I hope I can attend someday, is the Texas 200 run by Chuck of Duckworks.  I love that stretch of the Texas coast, in fact my first ever cruise - this one aboard the original Spartina, a Sam Devlin designed Nancy's China - was along that stretch of water.  I'll get down there someday.
In the meantime I'll look forward to the OBX130.  The photos above show my jeep and Spartina at the marina in Engelhard and then Spartina a few hours later double reefed and heeled over in a good breeze.  Maybe someday that jeep will tow Spartina to Texas or Florida.  We'll see.

Hi Steve, I'm glad to have found your blog. I may be a kayaker first, but I'm slowly getting that sailing thing down. I started with a Balogh Sail rig for my Kruger Canoe, and now I find myself crew and learning to sail on our Core Sound 20 "Dawn Patrol", which my husband and son raced in 2008 EC. We will also likely be in the 2010 OBX, and are looking forward to sailing in our beautiful NC Sounds.
Dawn

Dawn, great to hear from you. I've been a fan of your adventures for a couple of years now. I envious that you have your first big trip just a few weeks away. I'm a couple of months away from mine. I agree with you on the sounds - they are beautiful. Good luck on the EC.