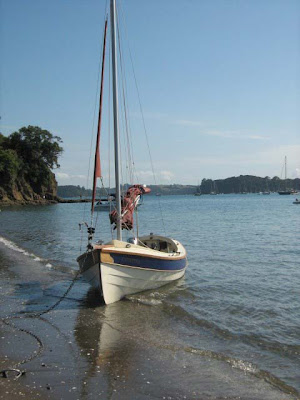 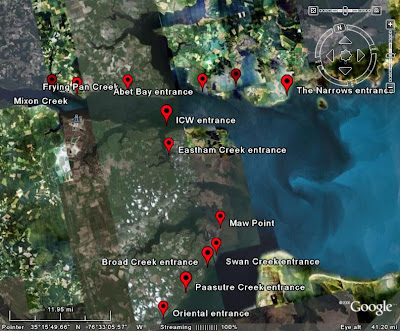 Great story on Duckworks magazine the other day by New Zealand designer John Welsford about the Mahurangi Regatta.  The event, which John says has been going on for over 100 years, draws a huge collection of boats.  That has got to be something when you think about Kiwi obsession with boats.
Mixed in with the fleet were several of John's designs including two of the earliest built Pathfinders, Varuna and Cavatina (at top).  I am familiar with Varuna, in fact it was David Perillo's report on sailing the newly launched Varuna that led me to building Spartina.  I had seen the occasional photo of Cavatina here and there, but did not know much about her.  She is a gaff-rigged sloop, where as Varuna and Spartina are yawls.  In the piece John compares the abilities of the yawl vs. sloop and seems to favor the yawl.  I know I am very glad to have chosen the yawl rig, can't imagine small sailing any other way these days.  But Cavatina and her owner certainly find the sloop version to be a very able boat.  In fact Cavatina arrived at the Mahurangi Regatta after 15 days of cruising the New Zealand coastline.  I don't think we need anymore proof that the Pathfinder is a great cruising design.
Our tease of warm weather has left the mid-Atlantic and we are back to the more traditional winter skies.  Snow in the forecast for monday.  But pitchers and catchers report this weekend, buds are on the trees and daffodils are popping up out in the garden.
I was worn out from a busy week at work (is there any other kind these days?) so did not get much done beyond marking creek entrances along our sailing path on google earth.  I'll eventually plug those locations in to the gps, plus print out the google earth still images to laminate and carry on Spartina as a navigation reference.  I was also happy to come across nylon angler zip-off pants at Bass Pro Shops for $19.99.  That's a deal.  These pants are perfect for sailing.  Zip off the legs and you've got shorts, the nylon dries out quickly and there are a bunch of pockets for tucking away whatever you need.    I've got a pair from another company, but they cost almost $50 (and that was a sale price).  So I'll be picking up a pair or two soon.  They are available on the web at
http://www.basspro.com/webapp/wcs/stores/servlet/Product_10151_-1_10001_97426_625008000_625000000_625008000_625-8-0
Posted by Steve at 5:03 PM