The storm season will arrive a little early for me this weekend as I fly down to Pensacola, Florida to meet my brother and check on my aunt. Pensacola is just slightly east of the forecast track for Tropical Storm Bonnie. When I arrive saturday evening the storm should be due south of me but far enough out in the gulf that I don't think we'll feel any of the effects. 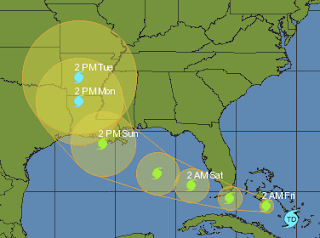 While it seems like the gulf coast has taken the brunt of the storms the last few years we've also had a few up our way. Below is a photo of the old Sea Gull Motel in Hatteras Village the day after Hurricane Isabel passed over in 2003. 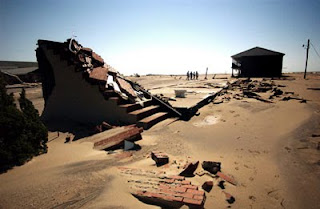 That part of the long, narrow Hatteras Island became known for a short while as Little Hatteras as the storm cut an inlet just north of Hatteras Village isolating the town residents from the rest of the island. (For a while local officials insisted it wasn't a deep cut through the island, it was only overwash. Opinions changed when dolphin were seen swimming through the "overwash.") 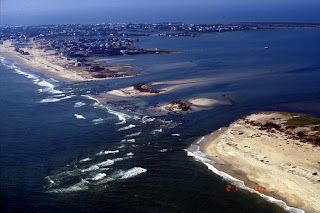 And below is a photo from Buxton, the town near Cape Hatteras Light, as storm waters rushed up over the dunes a few hours before Hurricane Isabel came ashore. 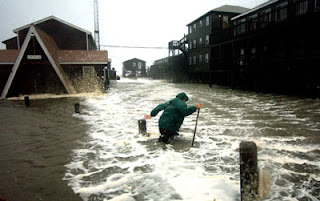 My favorite source is information about hurricanes is the Weather Underground's Tropical Weather page. I check it almost every day from now until early October. On that page you'll find Dr. Jeff Masters' Wunderblog, a great running commentary on storm development. Masters pointed out last week that this could be a busy storm season due to a dramatic shift from El Nino to La Nina. Here is what he said....

"The last time we had a strong El Niño event followed by a La Niña event in the same year, in 1998, we had a Atlantic hurricane season 40% above average in activity, with 14 named storms, 10 hurricanes, and 3 intense hurricanes. The season was relatively late-starting, with only one named storm occurring before August 20. I'm thinking this year's season may be similar, though four or more intense hurricanes are a good bet due to the record warm SSTs (surface sea temperatures)." 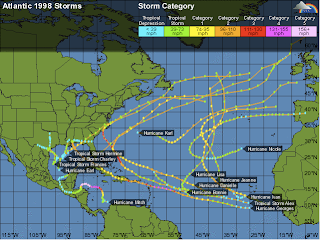 Above are the storm tracks from 1998 and you can see it was a busy year. Two of those storms came through our area - Earl, a poorly formed storm that went from the gulf coast inland to the east coast, and Bonnie, which came ashore as a hurricane, became a tropical storm and then re-intensified to become a hurricane as it moved up coastal North Carolina and Virginia.
So it could be a busy season. I'll wait and watch.
steve
Posted by Steve at 5:20 PM

Good luck down in FL. Hopefully its gone by then. I'm a big fan of Weather Underground myself and I also wrote a post about the upcoming hurricane season which is supposed to be pretty intense. One of the other pages I found for tracking hurricanes (aside from Wunderground's) is below:

Our paths cross again...
I was on Hatteras about a month after Isabel. The "overwash" was being repaired still but was passable to traffic. There was still a lot of damage in town.
If you look at the aerial photo in your post you'll see a building out in the sound in the upper right quadrant of the photo. That building was still in the water when I was there.

hey steve - how you doing.....good blog.....i'm always fascinated reading it because you pick up on som many things that i teach as case studies but which are impewrsonal in textbooks...you sort of make it very personal - a human dimension - cheers
steve
welsh guy in plymouth UK