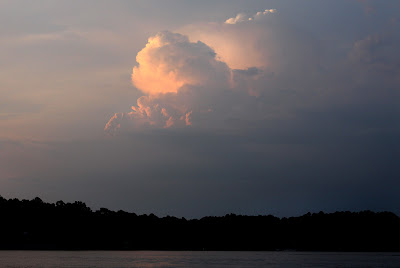 We had the anchor up at 6 a.m. on Beard Creek. It had stayed warm all night. Almost no bugs so I slept outside of my Bivy. It looked liked there were some thunderstorms south of the Neuse River, but clear skies over our anchorage. Below you'll see Dawn Patrol anchored 50 or 60 yards away. 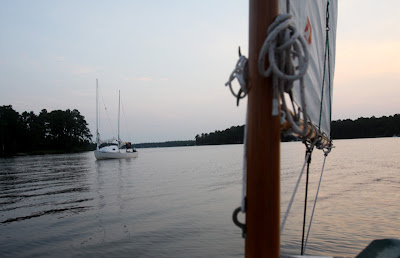 We motored around the sand spit and out of Beard Creek, past the shoals covered with crab pots, and raised sail for the last day of the trip. Wind was out of the southwest. Bruce caught a little more sleep once we were out on the river. 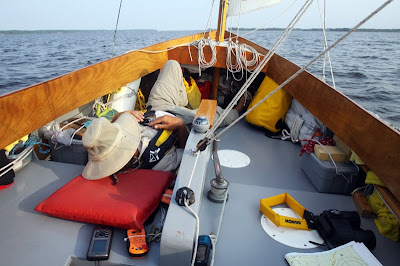 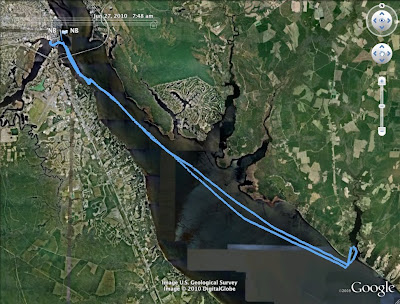 By 6:40 we could see New Bern through the binoculars, the Hwy 17 bridge and the big sign for Outback Steakhouse. We were moving along at just under five knots. For the only time of the trip we were leaving Dawn Patrol behind - the breeze must have failed them once they got out on the river.

We sailed from Beard Creek all the way to the New Bern Grand Marina dock with our ladder dragging through the water. If that didn't slow us down our lack of any haste and relaxed laziness certainly did, as we sailed the entire 12 miles on a single port tack. "Honey did you bring in the sea anchor?" "Why no, Dear, I thought you brought in the sea anchor." "Well in that case, Honey, we should remember to bring it in when we arrive in New Bern."

(I mounted the ladder on the outside of the transom low enough so that I would not have to see it from the cockpit. The down side of that is that it is not obvious when it is down in the water.) -- Paul 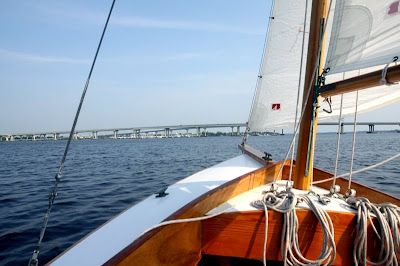 We sailed under the high rise bridge and then contacted the swing bridge at the entrance of the Trent River. I called the bridge tender on channel 13 and requested a lift. "Do you have auxiliary power?" he asked. I said yes, we might leave some sail up but we'll have the outboard going. "I appreciate that" he said.
By this time Dawn Patrol had caught the wind and was making fast time up the Neuse. 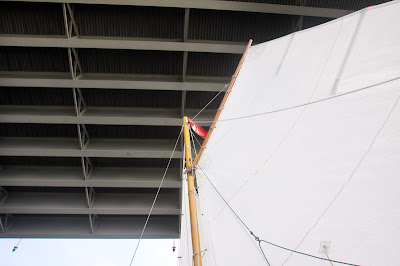 We passed through the swing bridge and called the marina at Hilton New Bern. They directed us down to the A dock and we were met there by the dock master. Just as we tied up we could hear the horns sounding on the swing bridge as it prepared to open for Dawn Patrol. 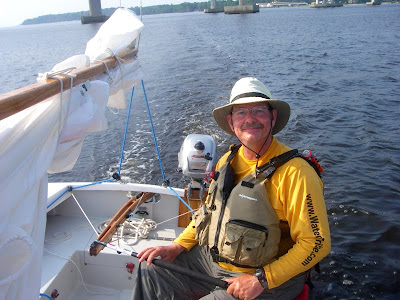 There's Paul at the tiller, above, and Dawn Patrol with the Hwy 17 bridge in the background. 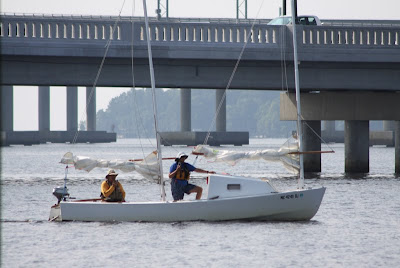 The dockmaster had them tie up right next to us. 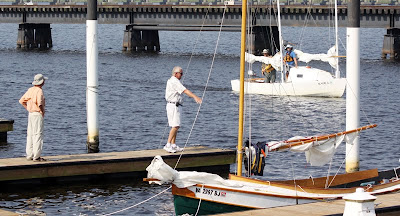 And once we had both boats secured the dockmaster was nice enough to take a photograph for us, smiles all around. 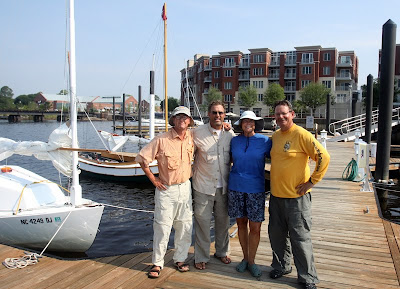 After docking the boats and cooling off in the marina's showers, Dawn and I explored the town on foot to find a cool place for lunch and rehydration. It was a very hot day. Ah... New Bern, the city of...... bears? It seems the founder of Bern, Switzerland named that town in honor of a bear he had hunted and killed nearby --"B„r" and "B„ren" are German for "bear" and "bears". A bear is prominant on Bern's coat of arms. In New Bern, artistic bears dotted the cityscape Dawn and I strolled along the streets. We found an air conditioned seafood grill, and enjoyed lunch while cooling off there. On the way toward the marina, a scoop in an ice cream shop was a good excuse to hang out in air-conditioned comfort for a while. Back at the marina we checked out interesting boats, large and small, and then found some cool and shaded places to relax and read a book. It was close to 5pm when the passing rain and thunder rolled through. "Dress for dinner" meant putting foul weather gear. -- Paul

Bruce and I had noted that we had not worn our foul weather gear at all during the trip. Just one rain storm on Core Sound and it had been too hot to put the gear on. But that evening in New Bern a thunderstorm came through just as we got ready to walk to The Chelsea for dinner. So finally, a chance to put on the foul weather gear. 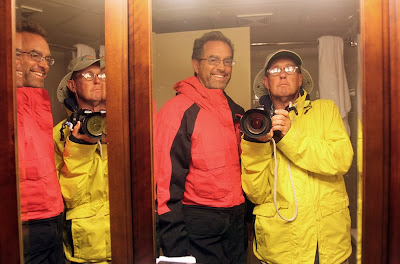 Paul and Dawn joined us for dinner. Bruce had shrimp and grits, Paul had shrimp and fried green tomatoes (talk about southern cuisine) and Dawn and I each ordered the crab stack appetizer plus a salad for dinner. Great food, check out The Chelsea if you are ever in New Bern.

The next day Bruce, Paul and I took a rental car back to Potters Marine to get our cars and trailers, then back to New Bern to haul the boats out. Bruce and Dawn drove the cars and trailers over to the boat ramp, Paul and I motored through Lawson Creek towards the ramp.
Now I tell all these stories about high winds, rough water and great sailing - but somehow I always return to form. Heading up the creek I followed the green and red markers towards the ramp. And then up ahead I see two white buoys and I think "oh, that must mark the area for launching boats." So I'm heading towards the white markers and I feel the centerboard bump against the bottom just as I make out the word "danger" inside a red diamond shape on the white buoys. This is classic me: 200 miles of sailing and I almost put the boat on the rocks 20 feet from the ramp. D'oh!
Hard left turn to get back in the channel to the last red and green markers that I had earlier missed. Look behind me to see Paul pretending not to notice my near mishap (though later on shore Dawn did hold up her thumbs and index fingers in a diamond shape while saying "danger" with a laugh.)

Yes, Steve, I saw that you were leaving the marked channel, but as I was following "that guy who's been here before and knows where he's going" I was tentatively giving you the benefit of the doubt for the brief moment or two you left the channel. Hey, at least you didn't sail with your ladder down. -- Paul
So that was the trip. The gps numbers are below for the day and the entire trip, but they don't begin to measure the amount of fun we had on the trip (I hope Bruce, Paul and Dawn don't mind me speaking for them when I say "we"). Thanks Paul and Dawn for joining us on the trip, I never would have guessed we would have such a great cruise based on one conversation and some emails. And thanks Bruce for being a great sailing partner. That was our fourth trip together, I can't wait until the next one.
Thank you to everyone who took the time to look at this log. I hope you enjoyed it.
steve
for the day...
Distance 11.9 nautical miles
Max Speed 5.6 knots
Average Speed 3.7 knots
Moving time 3 hours 14 minutes
for the trip....
Distance 188 nautical miles (215 statute miles)
Max Speed 7.8 knots
Average Speed 3.4 knots
Moving time 54 hours 45 minutes
Posted by Steve at 7:10 PM

Great recount of the trip. Thanks for sharing!
PS: the sail comment wasn't a reminder. The Pathfinder is on hold until I get some business taken care of.:-)

Thanks to you all for sharing your fun with us. We really enjoyed it, and you did a great job on the blog. Wonderful all around.

Thanks for all the good writing and photos Steve (and Bruce and Dawn and Paul). It makes me feel like I'm still a sailor even though I haven't been on the water in about a month (I'm heading to Jordan Lake to rectify that tomorrow).
Paul and Dawn have expressed interest in getting back out to the Hook, so I'll likely see salt water again soon.
See you on the water sometime.

Ken,
Dawn mentioned another trip to Cape Lookout. If they go and you go who gets custody of the outboard? steve

Since their oars are nicer than my paddle I think I'll retain custody of the outboard.
I had to pry the motor out of Dawn's hands when I went to pick it up. ;)