Day Six - back road to Beaufort

I woke up early and the wind was strong, maybe stronger than the night before. I stayed in the bivy for a while looking up at at the predawn sky and just listened to the wind blow through the rigging.
When I finally did sit up I looked over to Dawn Patrol and saw Dawn looking west into the wind. We were probably thinking the same thing - the wind is strong and it had swung to the west. It would be a long, hard sail out on Onslow Bay to reach Beaufort Inlet. The wind and the ocean chop would be on our nose.
I woke up Bruce and we talked about our options. Then I waved to Dawn Patrol and held up the vhf radio. I told Paul over the radio I thought the weather was not good for a sail outside on the ocean, we were thinking about heading to Beaufort the back way through Barden Inlet, Back Sound and Taylor Creek. "Fine with us" was Paul's reply. 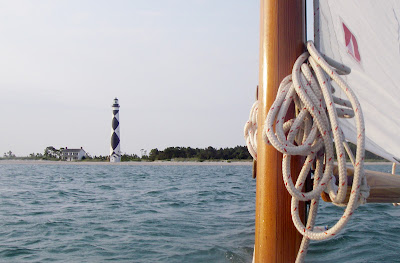 So it wasn't the sail out on the ocean that I had hoped for, but that didn't mean we wouldn't have a great day of sailing. Spartina tucked a reef in the mainsail for the first leg, a downwind run across Cape Lookout Bight and into Barden Inlet. I'm really glad we had the chance to pass by the lighthouse one more time, it was beautiful in the morning light. The photo above doesn't capture the pastel colors we saw that morning, it really looked like a painting. 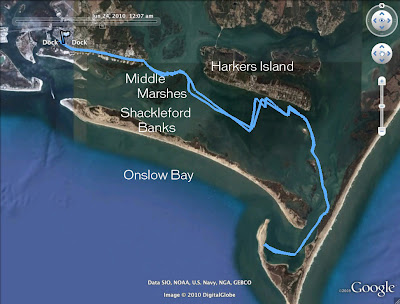 Our sail for the day, the backway to Beaufort, sent us up Barden Inlet to the channel leading to Harkers Island then west across Back Sound past the Middle Marshes and then to Taylor Creek. 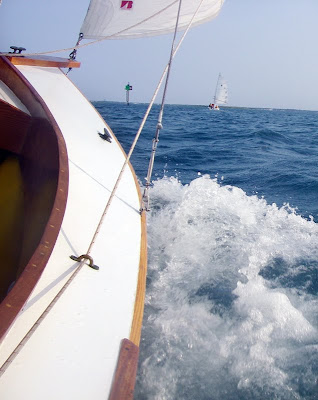 But before we left Cape Lookout Dawn Patrol made a point of sailing past us and getting up forward so they could get a nice shot of Spartina and the Lighthouse. Thanks Paul and Dawn for the photo below, I really love it! And check out the water. It was kind of bumpy in the bight, I wonder what it was like on the ocean. 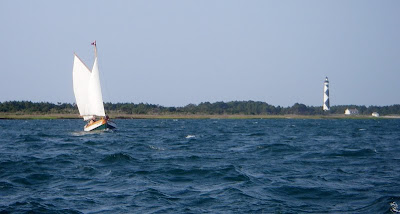 The wind was on our beam through Barden Inlet, Spartina moved along with the reefed main at 4.8 to 5 knots. It was an easy shot up the channel with Dawn Patrol, as usual, leading the way. Bruce and I, while not serious birders, enjoy watching and trying to identify birds. It was a real treat passing Morgan Island and watch flocks of American White Ibis flying to the island. Those exotic looking birds with pink faces and curved beaks just added to the tropical feeling of Cape Lookout.
Here are some comments from Paul about the sail across Back Sound to Taylor Creek...
We closely followed and retraced our GPS track back to the eastern tip of Harkers Island. Where's the "That was easy!" button when you need it, eh? Then we cruised along the Harkers Island waterfront more-or-less successfully following the markers to Taylor Creek. Getting past Harkers, I noticed that the GPS said we were moving at 5 knots but visually it was obvious that we were moving through the water at only about 1 knot. We were riding a conveyor-belt of current to Taylor Creek. - Paul 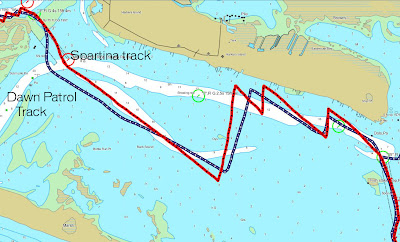 What Paul doesn't mention in his note is that he made a great decision to skip from the channel that runs right alongside Harkers Island to another channel that is more to the south in Back Sound. We had been looking at that channel wondering if it was a good way to go when we saw Dawn Patrol make a long tack almost due south across some shallow water to reach that channel. And, as usual, we followed Dawn Patrol. That channel, angling to the west northwest, gave a direct run past the Middle Marshes to Taylor Creek. This was good decision making and great sailing.

So now I've got to ask you Dawn, just what did you think you could learn from sailing with Spartina that you could not learn from the guy sitting across the cockpit from you? See Dawn's response here.

The channel past the Middle Marshes was well marked but very shallow and narrow. Spartina flew through, tide aided as Paul pointed out, at over 6 knots. Then we started tacking towards Taylor Creek. 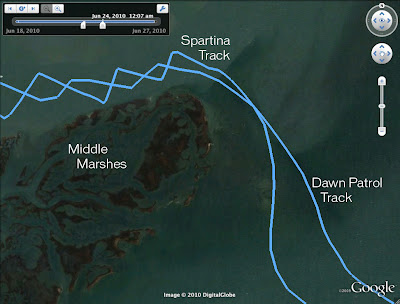 Some more comments from Paul....

The entrance to Taylor Creek looked a little crazy with the red can buoy sitting high and dry on a shoal, the current going our way, and sudden lack of wind due to trees on Carrot Island. Dawn had previously had concerns about sailing/rowing in Taylors Creek so I conceded to starting the motor and starting to drop sails as we approached to within ten yards of that red can. 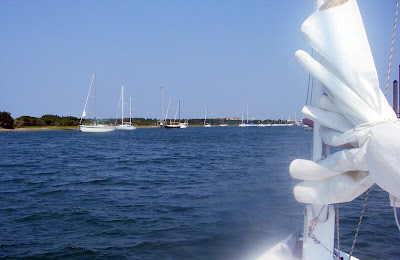 Once in Taylors Creek, the winds were actually not too bad for sailing but I knew that with the motor puttering along Dawn was happy at the helm, enjoying the view and all the interesting boats. Maybe next time we will sail in. - Paul 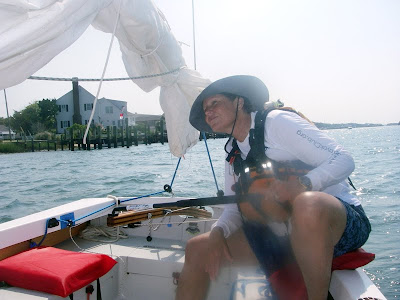 On Taylor Creek we passed the old fish processing plant and the giant net drying reel. I'm always fascinated by that reel. The book The Boy, Me and the Cat - about a catboat cruise along the east coast in 1912 - has a photograph of a reel just like that, or maybe the same one. Talk about a piece of waterfront history. 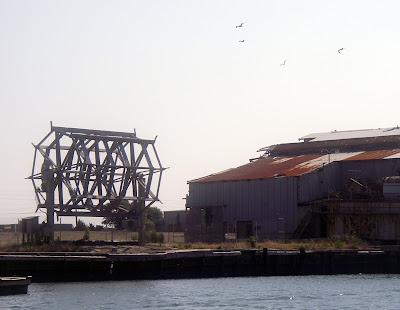 Like Dawn Patrol we motored up the creek. The tide was with us but the wind directly against us. 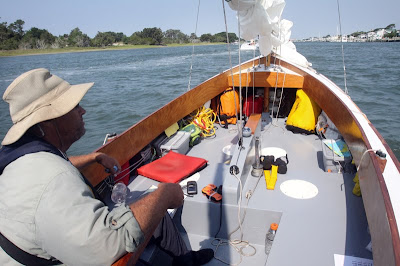 Beaufort Docks Marina was easy to find and the folks there were friendly and helpful. We were off the boat before 11am. The Dock Master gave us wooden nickels good for two free beers at the Dock House Restaurant. After buying ice for the cooler, it didn't take long for us to head to the marina's showers to cool off and clean up. I tried to stay in the nice cold shower long enough for hypothermia to set in but no luck. Due to that rocking and rolling feeling from living aboard the boat for several days, it was hard to stand still in the shower for very long. Walking felt better. Later Dawn reported that her experience in the shower included the thought, "Wow that's neat that they put their bathrooms and showers on a floating dock!" (The bath house was on dry land, of course.) - Paul 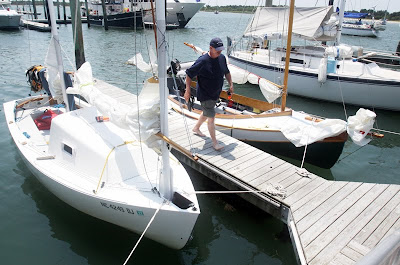 So now we are six days into the trip. Long days of sailing together, evenings rafted up together, mornings checking with each other on the plans for the day. So what do we do? We all get together for lunch! I guess we were getting along pretty well by this time.
The afternoon was spent cleaning the boats, doing laundry, running errands. And then we got together (again) to spend our wooden nickels on beer followed by a great dinner at the Ribeyes Steakhouse.
I will confess to having one of those very nice moments that evening as we sat on the second floor deck of the Dock House Restaurant. I was looking down at the marina and in the afternoon light a nice wooden mast with a red pennant caught my eye. What a beautiful sight I thought. So I stood up to get a good look at the boat with this nice mast and pennant. And it was Spartina..... 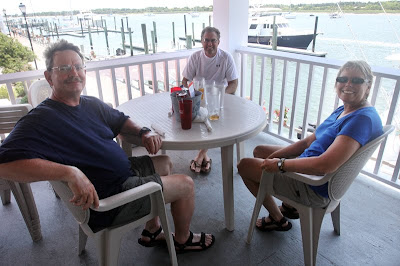 And I thought I was the only one who got seasick in the shower. On dry land!! Isn't that the weirdest feeling?

Great trek, guys! Man, when my wife and I decide to do that kind of trip, we're calling you first.

Just wanted to say again I'm really enjoying these updates. Great to experience a little bit of the trip from my desk.

And I bet that shower in Beaufort felt great! Except for the seasickness.

Your right Steve, I don't know what I was thinking. Paul certainly showed me he knew what he was doing. And you also can do more than just write about it :) I've posted a "Mea Culpa" on my blog.