your bait sucks and your boat is ugly

This morning as I rigged Spartina for a day sail I was enjoying the bumper stickers I've collected and put on the guide posts of the boat trailer. When we go on cruises I try and pick up new stickers in each town along the way. Below is my new favorite, it is from New Bern and says "YOUR BAIT SUCKS AND YOUR BOAT IS UGLY". It is from a bait and tackle shop but I found it at a gift shop in downtown New Bern. 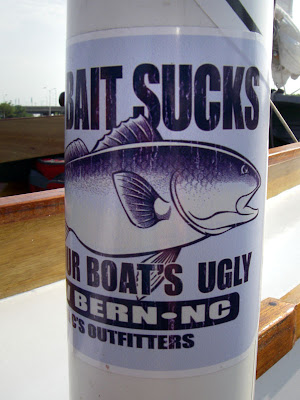 Here are some other stickers from past cruises, top to bottom you see Hwy 12 (which is the main road down the outer banks) from a Pamlico Sound trip, Oriental Needs Care from the Skeeter Beater, Somers Cove Marina from the Crab House and Tilghman Island also from the Crab House. The posts are getting full, soon I'll have to start overlapping the stickers.

I've been thinking a lot about the Philadelphia duck boat accident where a 250 foot long barge ran over a tourist boat. I day sail on the Elizabeth River, a very industrial river, and deal with barges, tugs, container ships, war ships and colliers on every sail. Today after I launched I came around the corner of the pier and found a tug pushing a YRBM (which is a repair, berthing and mess barge for military ships undergoing repairs in a shipyard). At first it wasn't moving and was crosswise in the eastern branch of the Elizabeth River where I launch. 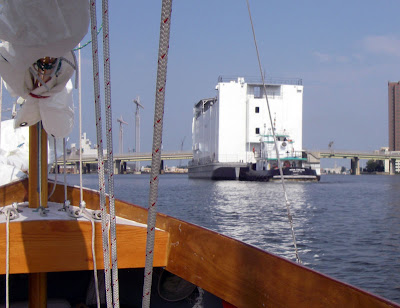 I used the radio to call the tug - "Sailing vessel Spartina calling the tug off of Harbor Park". It took a minute or two but the captain came on the radio. I explained who I was, where I was and asked his intentions so that I could stay out of the way. He said he was waiting for a 9 a.m. bridge lift and he would appreciate it if I could stay astern of him until he was clear of the bridge. I said I would and that I would also continue to monitor channel 13.
Over the years I've talked to tugs, colliers and war ships in this sort of situation. Every captain has thanked me for contacting him, they appreciate the communication and awareness. Let's face it, these vessels are so large and have so much momentum they can't stop even if they wanted too. When I'm around heavy traffic I always monitor channel 13. 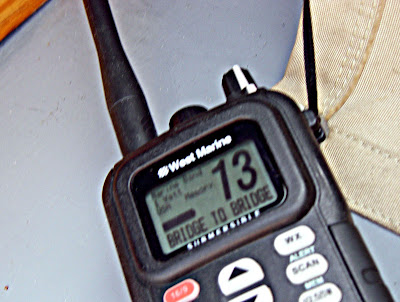 I've been focusing much more on the fall sail than I would have expected, thinking about it during my morning walks or on day sails. Maybe it is the emails from friends - Seth, who offered some hospitality around Chestertown; Barry, who wanted to know if I would be at the Mid-Atlantic Small craft festival (I met him there briefly last year); and James, who will be sailing the upper part of the bay in late September. 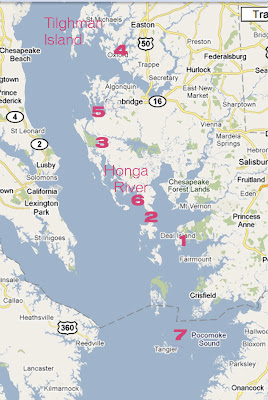 So how's this for a plan. Start at Rumbley (1) and sail to Okahanikan Cove (I gotta figure out how to pronounce that before I go there) on Bloodsworth Island (2) then follow the Honga River inside the Hooper Islands to Punch Island Creek (3) and head around to Oxford (4) on the Choptank River. Go from there through Knapp Narrows on Tilghman Island and down to the Little Choptank River (5), then outside of the Hooper Islands coming in at the southern end (6) before sailing south on the sound to Tangier (7), Smith or maybe Watts Island or even Onancock.
That's a start. I'll have to think about it for a while and start measuring distances. 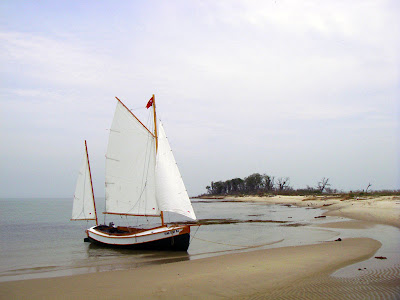 Above is Spartina on the beach at Watts Island, a now unpopulated island a few miles east of Tangier. At one time it was large enough to support a plantation, now it is a narrow sand island with some trees and thousands of birds. 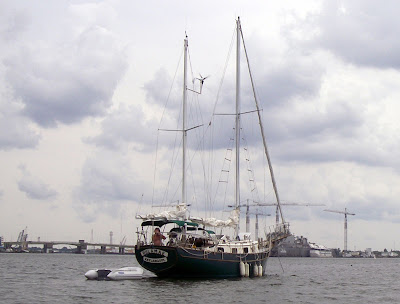 As I finished my sail today I came by the ketch Hulamae out of Key Largo, a very stout looking boat. The captain and I each had a laugh as we realized I was taking his photograph while he was taking mine. "That's a beautiful boat" I said. "Yours too" was his reply. I wished him well on his journey and he wished me well. A nice way to end the day on the water.
steve
Posted by Steve at 7:36 PM

I really like that picture at Watts Island. NICE!

Did the Captain of Hulamae have short hair, or did he almost cut it?