Day Three - another creek and the Neuse River

Ground fog clung to the marshes lining Bonner Bay the morning of day three. I think everybody had a good night's sleep. Both boats had anchored out in the middle of the bay - the overnight forecast had been for light winds - so that we would be be as far away as possible from the mosquitoes. It seemed to work out pretty well.


The photos above and below are from Dawn Patrol. That's Spartina in the photo below with her mizzen raised as we got ready for the day's sail. It gives you an idea of the wide open space of Bonner Bay. 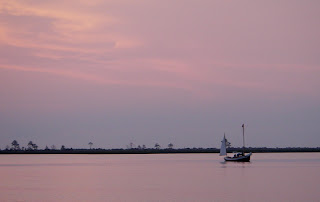 There was a good breeze out of the west southwest. Bruce and I sailed off anchor just before 6:30. We headed over to Dawn Patrol and asked about their plans for the day. They had the same idea as us, take Dipping Vat Creek out toward the mouth of the Bay River, turn south past Maw Point on to the Neuse River and head for Oriental.
. 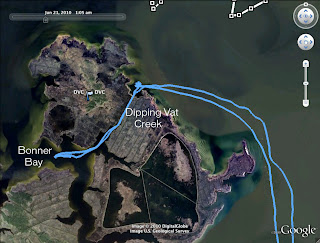 Using Dipping Vat Creek did save us a few miles, it was a more direct route to the mouth of Bay River. But that wasn't the point. Seeking out the old, little used canals was a key part of planning the trip. It looked like an interesting waterway (ditch, really), plus it would be cool to have a name like Dipping Vat Creek in the log book. (I would put it up there with "Bloody Point", "Punch Island Creek" and a few other well-named places we have passed by).
I had done some side by side comparisons of Dump Creek (which Bruce and I had transited a day earlier) and Dipping Vat Creek seemed a little wider than the first creek so we should have no trouble getting through (I thought). I did notice a little pier on the creek but I still thought it was easily passable. 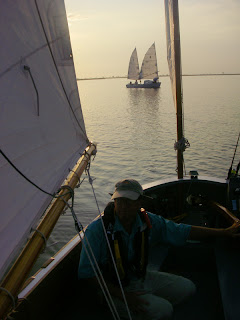 So we headed east and northeast through the marshes using the gps to show the entrance to the creek. We came around a few marsh points and then there it was. The first section of the creek curved back and forth for a short while. Still under sail, just before we got to the straight (surely man-made) portion of the creek, I saw a fishing net stretched across the width of the creek with cork floats keeping it right up on the surface. Bruce raised the cb and I raised the main, we slid over the net. I called back to Dawn Patrol and Paul indicated he saw it too.

When we got to the straight portion of the creek we could see the small pier to starboard. And we could also see something not evident from google earth. A big metal gate that was standing in a partially raised position. As we approached Bruce and I looked to see if our 18 foot mainmast could pass through. 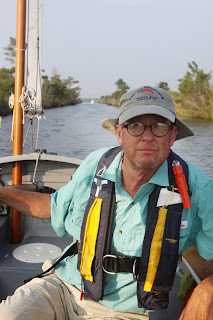 We were under power by this time and tried to slide through. The top few inches of the mainmast bumped gently into the gate, Bruce swung the outboard into reverse and we backed away to regroup (you can see that on our track below). We made another approach, this time hugging the left bank and angling to the right between the gate and the pier, making it with room to spare. At this point I wondered about Dawn Patrol and her mainmast (which I think is almost 23 feet tall). 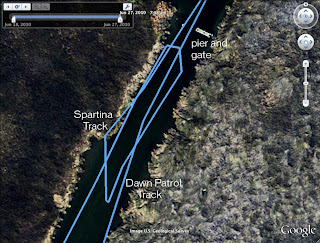 Looking back towards them on the creek I should have remembered that they are Everglades Challenge veterans. Nets, bridges, gates are no problem for them, just few more filters in a race. They had dropped both main and mizzen and were comfortably passing up the canal. Cool! 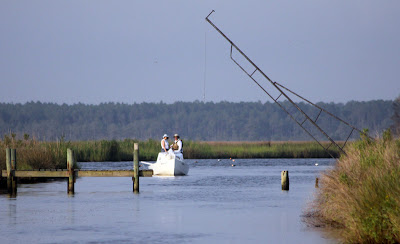 We exited the creek on a nice little marsh lined cove, raised sails and headed around Maw Point. We finally got a good look at the speed of the Core Sound 20 and they passed us and soon left us behind. The sails of the cat ketch rig looked fantastic set off against the morning sun. We headed south into the Neuse at four knots, then picked up more wind and moved along at a very comfortable five knots. Blue skies, calm water and a nice breeze. What more do you want?

(I would add here that everything was wonderful all morning. We had some excitement getting past the raised gate arm in the canal, we loved watching Dawn Patrol slide on past us, again, and we really enjoyed the wind and clear skies. But once again the deer flies darted around in the boat, hiding under the coaming and under the foredeck, attacking our feet with impunity. They would keep up this harassment all the way to Oriental. Now while this was a bit of a nuisance, even the deer flies couldn't take the glow off such a perfect day. Bruce) 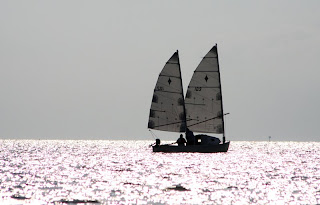 Below a picture Paul shot of Dawn that morning (that little white thing to the right is Spartina). I put that picture here because of the big smile. Dawn had been a little concerned about sailing in the weeks prior to the trip. She is a kayaker and did not feel completely comfortable on a sailboat. She had mentioned that to me in a couple of emails and even did a blog entry about it. But you can see once out on the water she was loving life. It was such a pretty morning I think we were all loving life. 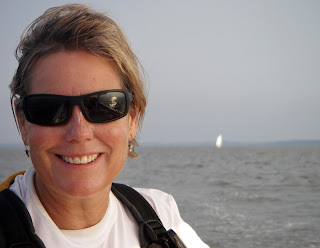 You can see our gps tracks below. We continued our patterns in tacking - Dawn Patrol made shorter (more strategic) tacks from the shore to halfway across the Neuse, Spartina took a couple shorter tacks then we made a long sweeping tack all the way across river. This should have put us in position for a last tack that would have gotten us to Oriental. I think that would have worked out just right if the wind didn't die on the far side of the river. But it did die right at the mouth of the South River. I really like those long tacks for some reason but this one did not work out. 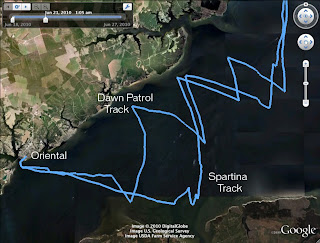 We picked up fluky breezes here and there for a while, hoping the afternoon winds would kick in. But they didn't. So after drifting around in the heat at less than a knot we cranked up the outboard. 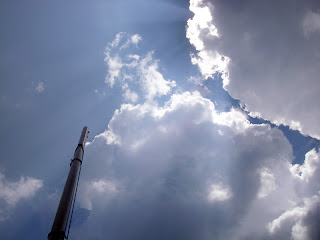 Thirty minutes later the afternoon breezes did kick in, we raised the sails and shut down the outboard for a nice ride into Oriental. Just before 3:00 we passed the breakwater under full sail and made a couple of tacks in the harbor before dropping the sails and starting the outboard. It was breezy by then and there were a lot of boats anchored out in the harbor. The quarters were a little bit too close to go in under sail. And on top of that we were getting squeezed between a little tour boat was heading out to our starboard while a second boat, with a couple on board wanting to photograph Spartina, ran alongside to port.

As we approached the public pier we could see Paul and Dawn pointing out an open space on the free pier and a second free space was opening up as a larger sailboat was casting off. We tied up on the left side of the pier then help Dawn Patrol move from a temporary slip to their slip for the night. Bruce and I would be staying at the Oriental Marina and Inn while Paul and Dawn would stay on their boat for the night.

(We have been very fortunate to have a berth at the public dock available every time we have visited Oriental. Once we tied up, and this is pretty common, it isn't long before there are no berths left and late comers have to anchor out or get a slip at the marina. Last time we put in at Oriental we were soaked from a rain shower. This time we were soaked from the heat and humidity. Boy did the air conditioning feel great and then of course a cold beer really hit the spot. We had a great time relaxing with Dawn and Paul while we did the laundry. Love that Oriental. Bruce) 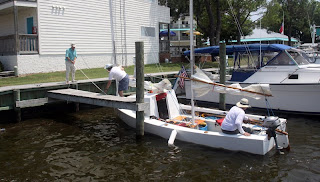 Both crews took the afternoon to do laundry, clean the boats and get organized. And then it was straight to the Tiki Bar for a cold beer, a lot of fun talk and very relaxing evening. The trip was going just great. Sailing had been perfect and the company was a true pleasure.
We grabbed dinner right there at the Toucan Grill. I don't think anybody stayed up late than night, we planned to cast off at daybreak the next morning.