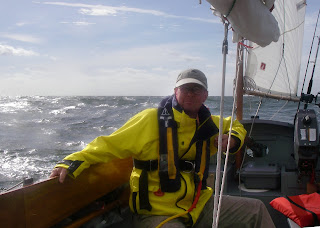 I've been doing a little research for the fall trip and mapping out possible routes and distance. For eight days of sailing from the little community of Rumbley (1) on Goose Creek north to Oxford (4) then back south to Smith Island (7) I've got sailing distances each day anywhere from 17 miles to 30 miles. Sounds reasonable. Above is a photo Bruce shot of me sailing up the Chesapeake Bay west of the Hooper Islands last fall. On this trip I hope sail inside and explore the Hooper Islands. More on that in a minute. 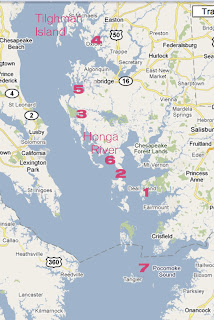 For my first stop I had been looking at Bloodsworth Island (2) but noticed on the charts it was marked with danger zones. For decades it was a bombing range and although that has ended for the most part there are concerns about unexploded ordnance around the island and just offshore. Somewhere I read it was best (or possibly mandated by law) to stay at least 75 yards off of the beach. 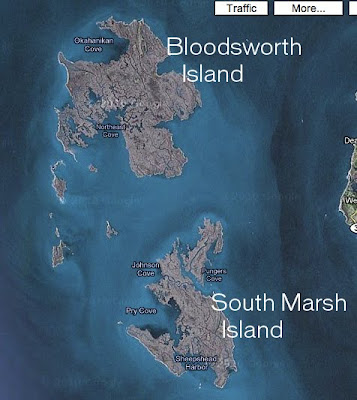 I asked our friend Kevin B., sailor of the Navigator Slip Jig (below), about this. He has done some sailing in the area. His suggestion was not to venture too close in Spartina, wouldn't want that steel plate centerboard clanking against something that had a fuse. I might be better off, he said, stopping at South Marsh Island just below Bloodsworth Island. Good suggestion I think. Below is a photo of Kevin from when we met him at Dividing Creek for the Mid Atlantic Small Craft Festival last fall. (He did a really nice job of building Slip Jig, beautiful boat!) 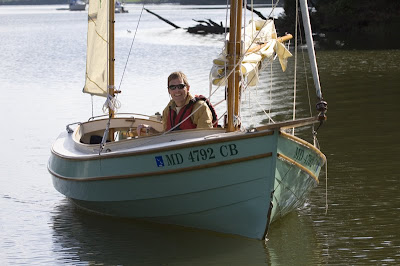 The other thing Kevin mentioned in his note was the the Honga River is one of his favorite places to sail. From looking at the sat photo I can see why. A wide river protected from the Bay by the three Hooper Islands to the west, plenty of small coves and creeks plus a couple of small towns.
For the trip I had thought about sailing one direction on the Honga River and then sailing the other direction outside the Hooper Islands on Chesapeake Bay. But the more I look at the river the more I think I might just explore the river heading both north and south.
Here is a very nice article I found on the Honga River at ChesapeakeBoating.net. Lots of good information there including details about a couple of places to get food. I'll be camping out each night of this trip but the idea of stopping somewhere - in this case either Old Salty's at Fishing Creek or Rippons Bros. Seafood at Rippons Harbor - to get lunch or a nice cold glass of iced tea sounds pretty appealing. 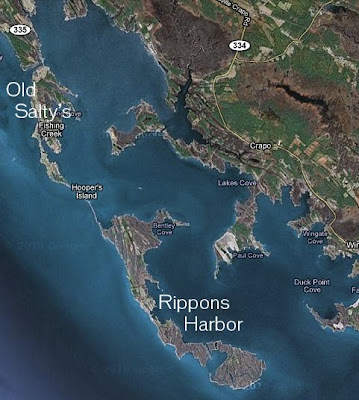 And speaking about stopping for lunch I would not mind timing a visit to Tylerton on Smith Island, probably the southernmost stop on the trip, for lunch at the Drum Point Market. I've read great reviews of their crabcakes and a Smith Island cake (10 layers!!). Last fall on the Crab House 150 Bruce and I stopped at Ewell a little to the north on Smith Island. Ewell was an interesting little town, I hear that Tylerton is a great place too. 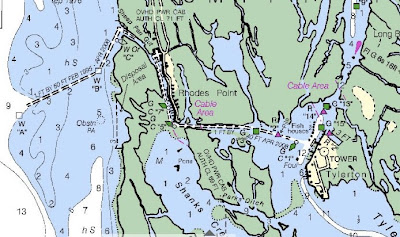 I'm enjoying looking at the charts, roughing out the plans. Seven or eight weeks until the trip, plenty of time to make adjustments.
steve
Posted by Steve at 9:16 PM