thou shall not covet thy neighbor's camp stove

One of the many nice things about the trip with Dawn Patrol was that we could talk about cruising/camping gear. We seemed to touch on equipment just about every evening as we rafted up together. Camp stoves were one of the first topics to come up.
I had seen photos of Dawn Patrol's camp stove (below), a Coleman "fold and go" propane stove, in one of her blog posts before the trip. It looked small, light and very practical. 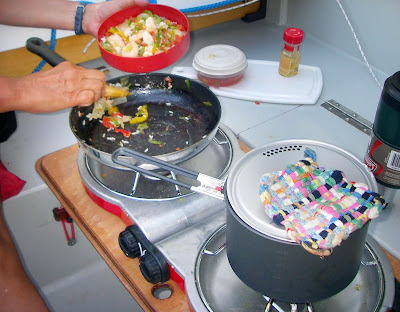 I use a Cole grill stove that is a few years old (that's Bruce cooking dinner on the Crab House trip below) with one burner and a griddle. It is much larger and heavier's than Dawn Patrol's. I started trying to figure out how I could wear my stove out so I could justify buying a new folding model (good luck wearing out a Coleman stove).
But at the trip wore on Dawn said she saw a few advantages to my older, larger stove. For one thing, it had built in wind screens on three sides. Her stove did not have wind screens and I think the wind may have interfered with the flame. She also said that the cooking grates stood relatively tall on her stove, something that you don't want on a rocking boat. So in the end my old stove wasn't so bad - I guess I'll get a few more years of cooking out of it. 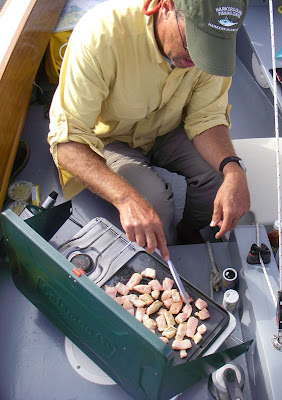 Along with his usual good ideas for cooking, Bruce had the great idea to bring along tortillas. No refrigeration needed, they keep for days and can be used with just about any sort of meal (including the shrimp tacos below). They'll be on my list for the next trip. 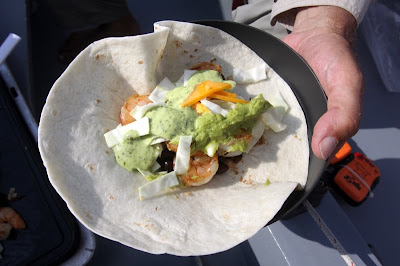 And another favorite piece of gear was the Danforth compass, a gift from my Mother. Thanks Mom! With a grey color it looked like it was made to match the interior of Spartina. And it worked very well mounted on the centerboard trunk. We used it constantly. I always carried a small hand held compass, but this was much nicer and easier to use. It certainly helped maintain our course when pointing high up into the wind (something I'll mention below). 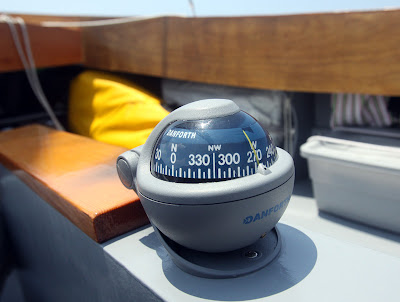 If we are going to talk about comparing stoves, how about comparing boats. Dawn Patrol is a Graham Byrnes designed Core Sound 20. Spartina is a John Welsford designed Pathfinder. Dawn Patrol is a cat ketch. Spartina is a gaff rigged yawl.
It was really fun to sail with another boat. I had never done that before except for the occasional 200 yard sail alongside another boat while out on a day sail. I learned quite a bit by watching the performance of another boat (and the crew that sailed her). Funny thing is it never felt like a race (the old saying that anytime two boats are on the water together it is a race did not hold true on this trip). Dawn Patrol is a faster boat than Spartina, I could have told you that just from comparing length of the waterlines. To me this was more of a shared journey, watching the other boat on the opposite tack, learning from their tactics, enjoying the beauty of their sails. 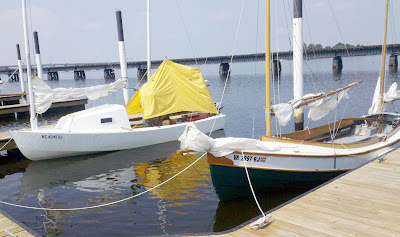 The one interesting thing to me was during the trip I felt that Dawn Patrol was pointing much higher in the wind, but now that I look at our tracks I see that we were not so far apart. This is one area - pointing up high to the wind - where I think we really benefitted from watching another boat. Seeing Dawn Patrol up ahead set us goal for us to aim for. Out there by myself it is easy to fall off a bit and pick up speed. But watching another boat made me conscience of pointing up and getting the most out of the wind. (Thanks for the sailing lesson Paul.) 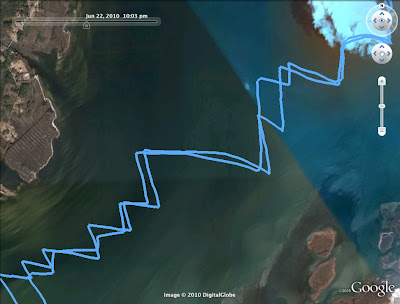 Which boat is better? That's impossible to say. I wouldn't give up my Spartina. I love the lapstrake hull, the gaff rig, the narrow forefoot, the lazy jacks, the positive floatation and the wide coamings to lean back against during a long day at the tiller. I'm sure if you asked Paul and Dawn they'll quickly give you a list of things they love about Dawn Patrol.
Let's just say I'm thrilled whenever I'm out sailing Spartina. And I'm even more thrilled when I'm out in Spartina sharing tacks with Dawn Patrol.
steve
Posted by Steve at 9:29 PM

That's what kills my wife about me! When there's a similar boat in size nearby, or even if it's smaller or larger, I'm always trying to go faster than they are. She exclaims, "It's not a race"! and I always respond, "It's always a race"!

Something that bugged me a few weeks ago; A larger boat was sailing behind us, slowly approaching, and when they were just to leeward of us, one guy asks, "Is that a Pearson? Nice boat". I appreciated the compliment. Then they proceeded to sail out from under us and continue on ahead. I thought, I'd rather be complimented while WE were passing them rather than the other way around!
However, we were towing a dinghy and had a slight furl in the jib, so there.

Steve -- Two things I've been eyeing with interest: One, your green camp stove. I'm with Dawn: that windscreen seems very handy, as does the dual-burner setup. And two: those shrimp tacos. Holy cow do they look good. Any chance Bruce can part with the recipe?

I was reading a note from John Welsford the other day where he says that pointing angle while tacking is largely dependent on mizzen angle (?). I hadn't known that. Evidently with the mizzen hauled in tight you can point a gaff yawl higher.

And yes, the mizzen certainly does help the boat point higher. But there is not a lot of fine tuning on that when out sailing - I leave my mizzen snugged up most of the time. The mizzen mast is flexible (by design) and spills any excess wind. It is only when the wind kicks up pretty good that I slack the mizzen sheet (but the closer to the wind that I'm sailing the less slack I put in there).

Steve,
The Core Sound probably can point higher than you, but has more leeway. That's a fine point in sailing performance.

Doryman,
that's an interesting observation. You may be right. thanks
steve

Great post. I was once checking constantly this weblog and I'm impressed! Extremely useful information specially the closing part. I maintain such information much. I was once seeking this specific information for a very long time. Many thanks and best of luck.