I was emailing with a friend just this past weekend and the topic of John Casey's "Spartina", the book that is partly the reason for my boat's name, came up.  I said I had heard at one time, maybe back when the book was published in back in 1989, that it was supposed to be the first book in a trilogy.  "Too bad",  I said "that the trilogy never happened."  Maybe I spoke too soon.
I was browsing around Amazon.com last night and came across the book Compass Rose, also by John Casey, the follow-up to Spartina.  How had I missed this?  I was published just a few months ago but apparently never got the attention that Spartina received. 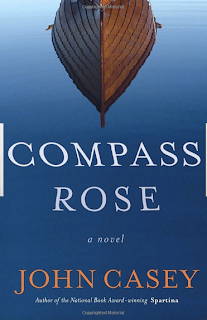 In the late 1980's Spartina was the winner of the National Book Award.  I bought it based not on the award, but instead on a review in (I think) Small Boat Journal.  I read the book and loved it.  No, it is not a perfect book.  But there are several things caught my attention in book.  Here is the description from the National Book Award...
A classic tale of a man, a boat, and a storm, Spartina is the lyrical and compassionate
story of Dick Pierce, a commercial fisherman along the shores of Rhode Island's
Narragansett Bay. A kind, sensitive, family man, he is also prone to irascible outbursts
against the people he must work for, now that he can no longer make his living from the
sea.

Pierce's one great passion, a fifty-foot fishing boat called Spartina, lies unfinished in
his back yard. Determined to get the funds he needs to buy her engine, he finds himself
taking a foolish, dangerous risk. But his real test comes when he must weather a storm at
sea in order to keep his dream alive. Moving and poetic, Spartina is a masterly story of
one man's ongoing struggle to find his place in the world. 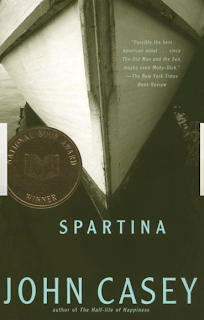 So I am glad to see that a sequel is out.  I've added it to my reading list for next year.  And hope that I won't have to wait as long - over twenty years - for the third book of the trilogy.