Morning on day eight came earlier than usual.  A couple of crabbers, diesels rumbling, motored down Tilghman Creek at 4 a.m.  It was a holiday weekend, Memorial Day.  Maybe they wanted to get an early  start on their workday.
About an hour later this waterman below motored down near us on the creek to set out his trotline. 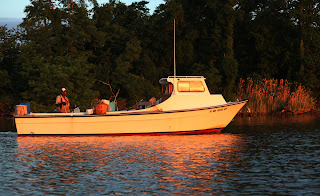 We had an easy day ahead of us.  A light breeze out of the south and clear skies, our goal was to reach Kent Narrows by noon, have lunch and make our way up the lower part of the Chester River.  We had time to spare so we sailed southeast into the wind, making about four knots on the Miles River. 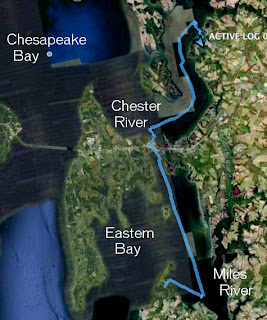 Off of Hambleton Cove we turned back north, sailing wing and wing towards Kent Island Narrows.  Just making two knots to start with, the breeze picked up and we were soon doing three knots while nearing Parsons Island.
At 9:40 I glanced at the gps and saw that we reached the 200 nautical mile mark for the trip.  Eight days, 200 nautical miles, at least a dozen bodies of water - and they were all fading away.  Tangier Sound was a distant memory, as were the dolphins of South Marsh Island, the bamboo channel of Fishing Creek.
For me a small boat journey is a complete immersion in the immediate environment.  After a few days on the water I can think about, really focus on, only what surrounds me at any given moment.  All else seems remote.  The day before or the day ahead, even those are distant.  It is only what I can see, hear, touch or taste right then, right there, that seems to matter.  And that was the way it felt sailing wing and wing that morning on Eastern Bay. 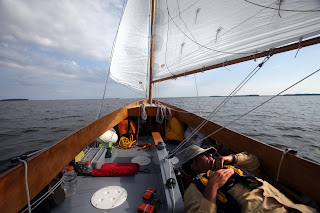 By 11:00 were dodging power boats and their wakes as we entered the narrows.  We dropped the sails and motored north into the channel, tying up at Bridges Restaurant for a nice lunch.   Back on the water before 1:00, we passed beneath the bridge in choppy, windy and crowded conditions, reaching the Chester River at 1:20. 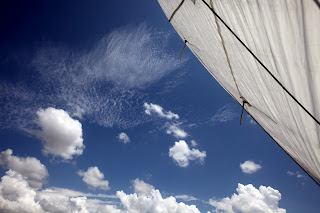 It was a great ride up the Chester River, full sail and making 5.5 to 6 knots in the afternoon breeze.   We found ourselves in the thick of a sailing fleet, some racing and some out for a holiday sail.  We had lots of people waving and saying hello, lots of nice compliments for what had to be the smallest sailboat on the river that afternoon. 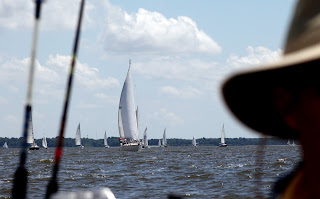 We rounded marshy Piney Point, putting the fishing line out for one last, unsuccessful, troll over a fishing hole marked as "Hell's Delight" on the charts.  Bruce is the only one with bragging rights for fishing on this trip.  I would really love to catch a fish in a place called Hell's Delight, but that will have to wait until another trip.

At 3:00 we tacked into Grove Creek, followed a well marked channel to Reed Creek and rode the perfect wind past the fleet of moored yachts to our final anchorage for the trip. 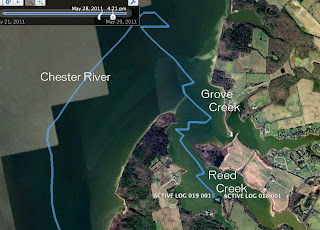 I got out for a swim while Bruce straightened up the boat.  I don't recall what we had for dinner that night but I do know we our last two cans of budweiser to wash down the meal. 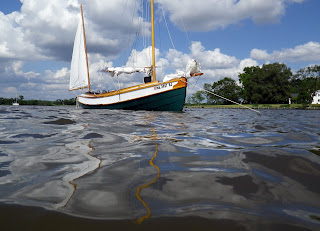 We relaxed in Spartina after dinner, talked and laughed a bit.  There was rich evening light as the sun went down. 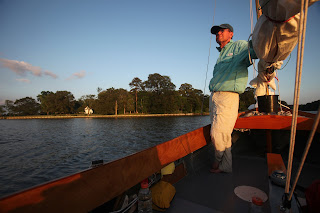 "complete immersion in the immediate environment" Great description. Precisely why I like small boats. Love the picture of Spartina taken from the water. The water looks so... um... wet. The next one with the evening light is great too. We see that light so often around here. Nice job of capturing it.

Thank you, MaryLou. Bruce and I talk often about the immersion on these trips. The world, for a while, is the boat and the water and sky - everything else is a distant thought.

I've perfected that 'immersion' in the form of just a few hour span. When I get down the river and out in the bay, everything slows down considerably, and remarkably I am able to block everything else out.
Especially on weekdays.