A gentle tapping noise in the middle of the night.  What was that?  A splash of water on my face.  What was going on?  And then a burst of heavy rain drops.  It was 4:30 in the morning and pouring on Little Pungers Creek.  Too late to put up the boom tent.  I checked with Bruce, he was fine.  We both dropped the upper parts of our bivys, zipped up and blocked out the rain.  I curled up in the sleeping bag and went back to sleep. 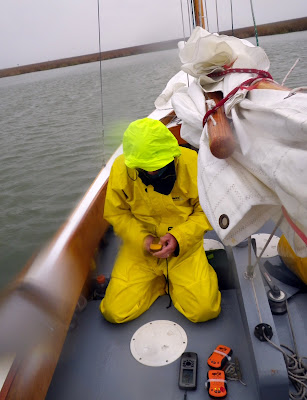 I don't know how long the rain lasted, but long enough to leave quite a bit of water in Spartina.  Up at 6:15 to sponge out the boat.  We tried to dry out the gear as we tucked it away.  At some point after the squall I had unzipped my bivy.  Water then slipped in over the waterproof boot of the bivy dampening both my sleeping pad and sleeping bag.  No big deal.  As we tucked the last of the gear away it began to rain again.  That's me above in my foul weather gear sending "ok" messages on the SPOTS and turning on the two gps's, one of my morning jobs on Spartina. 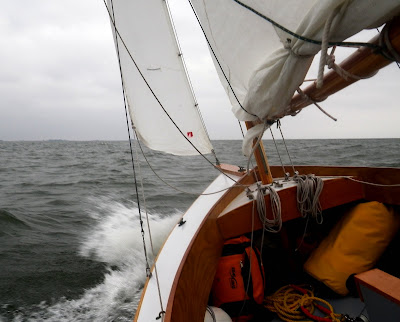 Anchor was up at 7:15 and we motored down Little Pungers Creek, the wind very stiff out of the SSE.  Past the shallows we cut the outboard and sailed east under mizzen and jib.  Once through the maze of crab pots we round up and raise the double reefed main.  Looking across Tangier Sound we could see Deal Island on a dark and choppy morning.  Plenty of wind for the reefed sails, we heeled over and moved along at just under five knots.  By 9:00 a.m. we are off of Deal Island trying to understand the entrance markers.  Is that a marker or an osprey nest?  Is that the entrance to the right, or is it over there to the left by the waterfront condos?  Do you see the jetty?  The dark, muted light did not help.

It became clear as we got closer - the entrance was to the left, hidden behind the point with the condos.  An easy downwind sail into the harbor. Once inside the harbor we headed north to an old wharf to see The City of Crisfield, a skipjack built across the bay in Reedville in 1949.  She is one of the few working skipjacks on the bay.  Several of the skipjacks have been preserved and used as tour boats (we would come across one in just a few days), but this one is still used for oysters.  She was dark and dirty and well used, a little bit of history right there on the harbor. 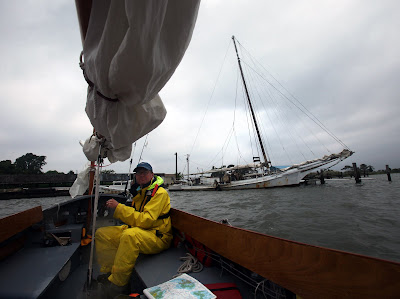 We tied up on the waterfront long enough to top of the fuel tank and grab some soft drinks at Arby's General Store.  We chatted with the nice lady behind the counter for a while, then headed back to Spartina. 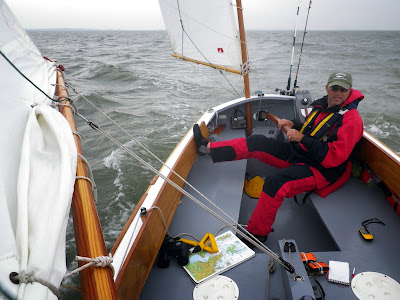 We were back on Tangier Sound by 9:30 and with strong gusts from the SSE we flew up the sound at six knots.  By noon we had passed the top of Bloodworth Island and entered the Hooper Straits, sliding by the light at 12:40.  The skies were clearing and the water was calmer in the protection of the Hooper Islands.  We rounded up and raised the full main, then continued on our way north on the winding Honga River. 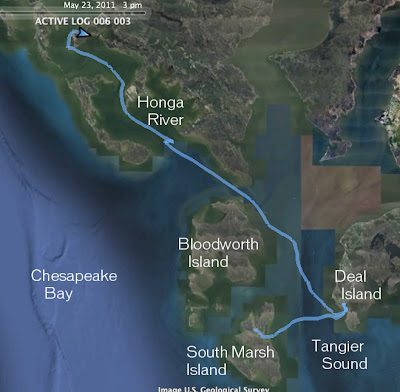 Checking the weather forecast we found we were sailing under "Severe Thunderstorm Warning No. 338."  I had never heard of a numbered warning before.  Apparently conditions were just right for severe afternoon storms.  It was still early in the afternoon, but with the warnings in mind we decided to anchor somewhere in the protection of the Honga River.  Sailing any further north would have put on back on Chesapeake Bay in an area that offered little or no protection.  We eventually chose Wheatley Point Cove, the same place I had anchored last fall.  It was a quiet cove, well protected from just about every direction, a great spot to spend the afternoon. 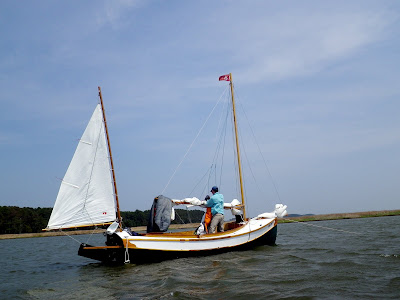 First job on the list was to hang out some of our sleeping gear to dry from the rainstorm.  That is me, above, putting up my sleeping bag and bivy.  Bruce took care of his gear too, then took a little nap. 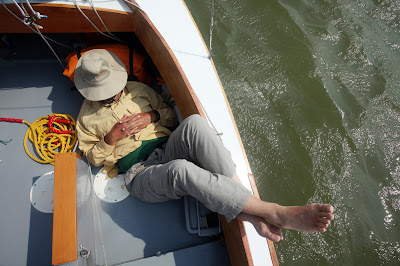 Early afternoon snacks of smoked oysters and anchovies wrapped around capers were on the menu, followed by Bruce's gumbo made with tomato sauce, lentils, onions, sausage and rice.  Three days into the trip and nothing but good food. 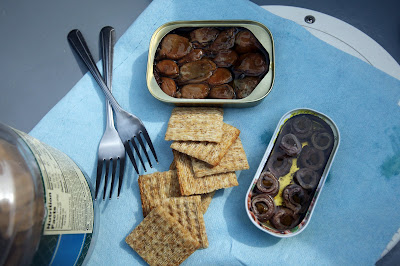 The storms never arrived, but none the less I think it was a good decision to anchor in a well protected bay.  Plus it was a very relaxing afternoon.  A chance to clean up the boat, eat some good food, catch up on our rest and listen to sports radio. 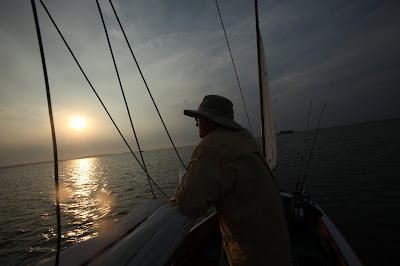 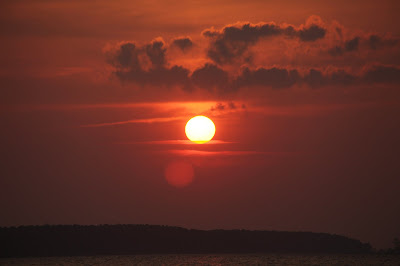 Condos? Deal Island? I guess I shouldn't be surprised. It's probably nearly 20 years since I've been there. Good decision on the thunderstorm watch.

Steve -- Do you guys get hot inside your bivys and bags? What about mosquitoes?

When camping I have a rainfly and a screen-bivy, and even then it gets stifling. Or do you usually anchor out far enough that mosquitoes aren't a problem?

MaryLou,
just a small group of condos right at the harbor entrance. The town hasn't changed much otherwise.

Seth,
we use Alpine Bivy's with a mosquito screen and a drop down cover for rain. I can think of only one time that I was too hot. Generally they are very comfortable. Sometimes I use a sleeping bag in the bivy, sometimes not. On this trip there were very few bugs and I slept most nights without the screen. I can find no way to predict mosquito activity, the screen is always easy to zip up.