my boat is not cute, neither are the Seals 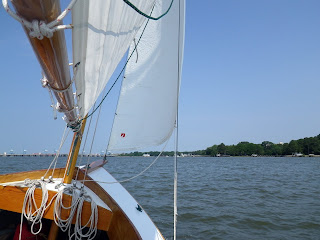 Quick post on today's sail, I need to get back to the daily logs.  It was a nice day on the the water, marred only by the comment at the ramp from a skiff owner who said my boat was "cute".  You can call Spartina a lot of thing but from my point of view "cute" is not one of them.  I let the comment slide - it was to nice a day to argue.
I used a different ramp today.  The Elizabeth River was crowded downtown for the annual Harborfest party.  Boat races, tall ships, beer, turkey wings - all that sort of stuff.  I used a ramp on the Lafayette River and then sailed down to the Elizabeth River where I could watch a lot of boats, including this yawl below, leaving the festivities.  It was a good spot of see a lot of different boats. 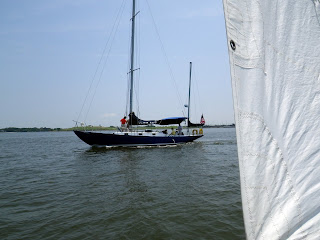 My guess is that these guys below are Seals - not the cute kind of seal.  They most likely did some sort of demonstration at Harborfest.  The east coast Seals are based at a couple of places in Virginia Beach.  You see them out jogging in the early morning in black shorts and white tee shirts.  Or swimming along the beach with goggles and swim fins.  Or hanging on a line beneath a helicopter as it flies overhead.  Or parachuting miles off the beach with black parachutes.  Around here you never really know if that guy in line next to you, the one in the blue bdu's (battle dress uniform), is a Seal or not.  You just never know. 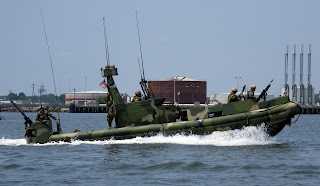 I was about to head back to the ramp when I saw a gaff-rigged cutter coming around the coal pier.  I will change plans anytime just to see a gaff-rigged boat. 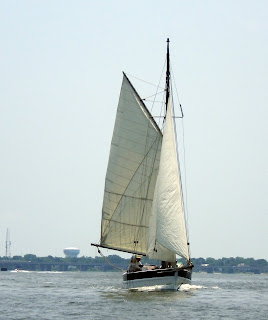 I sailed back out on the river to intercept the cutter.  Two women and one man aboard, all wearing white shirts and straw hats.  I told them the boat looked beautiful, they repaid the compliment in kind.  Out of Martha's Vineyard they said, but they were gone before I could ask anymore questions. 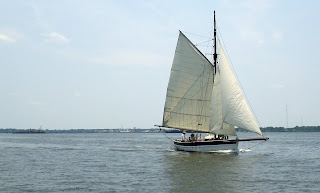 No name on the hull, just a classic boat heading home.
steve 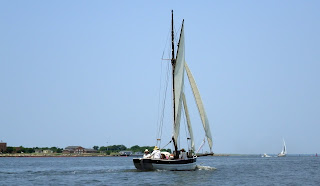 I'll go out of my way to look at a gaff-rigged cutter, too.