The lightest of winds from the south pushed Spartina off the white sand beach.  We raised full sail and let the gentle breeze carry us across Cod Harbor, the sand flats and Mailboat Bay towards Tangier.
Most often it is what we see that brings smiles to our faces on these trips.  This time it was what we heard.  At 8:30 and again at 9:00 the church bells of Tangier rang out across the water.  It was a beautiful Sunday morning. 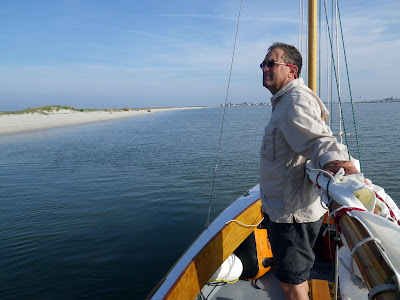 Crossing the sand flats the wind failed completely.  With the centerboard and rudder both partially raised, we motored along at idle speed.  A lone kayaker, Tanya from the Chesapeake Bay Foundation Port Isobel Island Study Center, paddled a kayak near the the shore of Port Isobel.  We said hello and talked for a few minutes.  She told us our timing was perfect, the island was alive with activity now that crabbing season was in full swing.  As we said goodby she pointed her kayak in the direction of Cod Harbor. 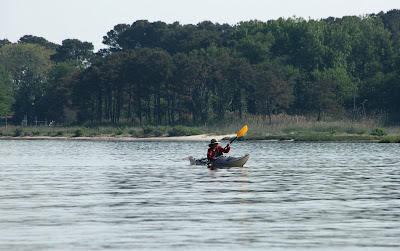 We entered the channel into Tangier just as a light wind filled in.  I turned off the outboard and we sailed west along the waterway lined on both side by crab houses on stilts.  A few skiffs motored here and there, but most of the island population was at church. 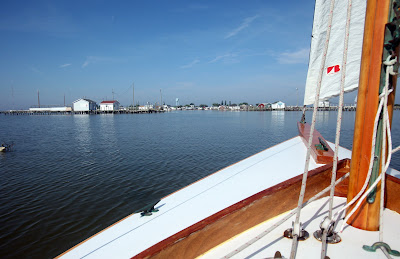 We tied up at an empty pier Parks' Marina.  When I called earlier in the week they said they would be in church but go ahead and tie up on our own.  But I was surprised to look up and see Mr. Parks walking from his nearby house (he attends a service later in, we saw him riding his scooter there with a nice tie and coat on).  I had met him a few years ago and he was kind enough to say that he remembered me.  We talked about the boat and the trip and a few friends that we have in common.  At first he would not accept the $5.00 for the short visit to the marina, but he eventually accepted it to pay for a few hour's stay. 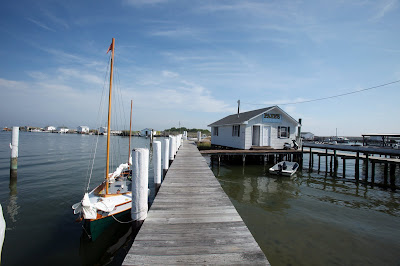 Bruce and I headed out on a walking tour of the quaint island.  It is a fascinating island that is in many ways too complex for me to describe.  Take my word for it - Tangier Island is well worth a visit.  The islanders speak in a dialect that, because of the island's isolation, dates back to old english.  You can hear a little bit of it (and enjoy some of the island humor) here (I know, the sound is not great, but give it a listen).

The people of Tangier Island have gone through some rough times over the years, but a local movement called Tangier Pride seems to be doing great things for the island.  I noticed a lot of renovation in progress, plus history and information plaques posted around the island for the tourists to see. 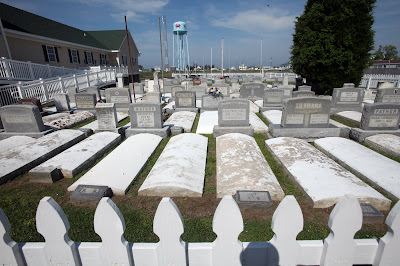 We walked down Main Ridge Road through the town, past the churches, homes and business.  There are basically two roads, Main Ridge and West Ridge, and they are quite literally ridges on the island.  If not for those ridges the island would be a salt marsh.

And of course Bruce kept his eyes open for some of the local bird life - plenty of that in the marshes that are found between the two ridges.  And I spotted this island skiff out in one of the tiny guts (creeks) in the marsh. 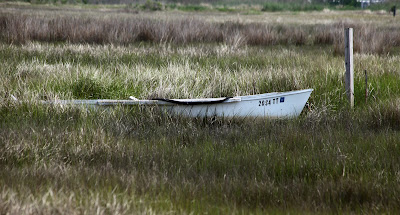 We walked down to the town dock where some of the locals were relaxing and waiting for the day's tourists to arrive on the mailboat.  The island schedule revolves around two things, crabbing and tourists. The crabbers head out on their boats around five a.m., returning midday with their catch.  The mailboat from Crisfield and the ferry from Reedville, arrive late morning and depart late afternoon.  The shops and restaurants open and close to suit the day tourists visiting the island. 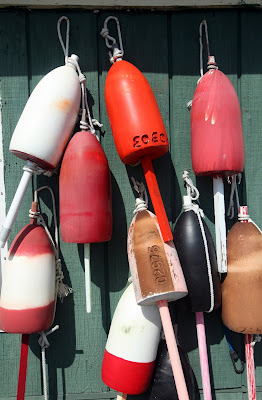 The first restaurant to open that Sunday was Lorraine's Sandwich Shop.  Bruce and I each ordered the soft shell crab sandwich and a salad.  The sandwich, very traditional with white bread, came with four "hotel" soft shell crabs (hotels being the smallest size crab, the larger sizes are called primes and whales and one other name that I cannot think of right now).  Lightly fried, the crabs were perfect.  Soft shells don't get any fresher than this, they most likely came from shedding tanks within sight of the restaurant.

We relaxed in the restaurant, enjoyed the air conditioning and cold drinks, then headed back to Parks' Marina for the afternoon sail to South Marsh Island.

Stopping for lunch at a restaurant along the way was fun.  We decided to do it a few more times during the trip 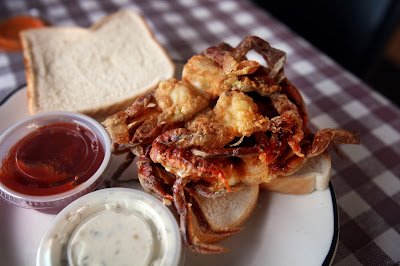 Geez, couldn't they fit any more crabs on that sandwich? Stomach is grumbling.