It took a little inspiration from my friend Jim, the outboard guy, to get the job done.  I emailed him yesterday telling him that there was not even a drip coming out of my Nissan two stroke 3.5 hp outboard's tell tale.  No cooling water can be death to an outboard.  He suggested using a wire to clean out any possible clogs, which I did without success.  I tried air pressure, I tried water pressure.  I took off the lower unit and ran a coat hanger up the intake tube.  Still nothing.  I wrote Jim asking for more advice. 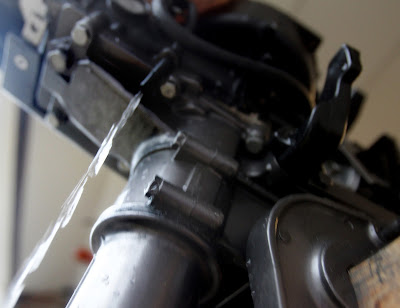 He replied with mentions of cylinder heads, gaskets and needing a shop manual for torque specs.  What's a torque spec?  This did not sound good.  I studied the online schematics, labelled in both japanese and questionable english.  I tried to call the local Nissan guy, getting nothing but voice mail.  I even researched a new outboard - $800 and a two hour drive.  I had the two hours, not the money.  No outboard meant no sailing, no cruises.  Was my sailing season slipping away?

Out to the garage again.  I pushed the wire in the opening, grabbed it with pliers and pushed harder.  It went in an inch, then an inch and a half.  Then two inches, then three.  I took a paper clip, which was slightly thicker than the wire, straightened it out and pushed it in repeatedly.  I pushed it in so far that I thought I would not be able to get it back out.  I set the outboard in a five gallon bucket filled with water and cranked it up.  Instantly water flowed.  It was  steady stream, not just the drip drip drip of the last couple of years.  The photograph shows the flow at idle.  When I throttled up it was like a jet.

It took a nudge from Jim to get the job got done, but it did get done.  Thanks, Jim.

I used to run mine in a buck of vinegar for about 15 minutes it the end of each saltwater season and then flush it really well with fresh water to help keep the whole system clean.

Your blog is very informative and I intend to return often to this site. In the meantime you might like to check out my own blog: Old engine tell tale problems.

I used the force, but with a paper clip instead of a light sword.

I have the exact same outboard. different brand and HP but exactly the same :) they're very reliable. I believe someone crossed the atlantic with just one of those. been using it for 6 years, first on an 11 foot dinghy, now as aux propulsion for a core sound 17.