Spartina shook and rattled in the wind sometime after 1:00 in the morning.  I peeked out of the bivy, stars  to port and starboard, a black cloud up ahead of the bow.  "I think we are going to get some rain" I told Bruce.  At first it was mostly wind.  I don't know how much wind, but enough to make me wish I had put more anchor line out that evening.  The ten pound navy anchor, chain and five pound sentinal anchor held fine.  Just light rain at first, then some lightning and then, as the wind fell off, a heavy rain.  We each zipped up our bivy's and fell asleep. 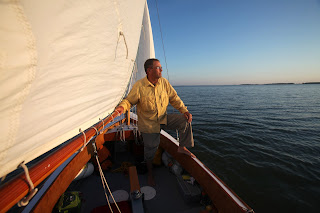 Spartina sailed off anchor at 6:30 on a beautiful morning.  We ghosted along at an easy two knots heading towards Cook Point at the mouth of the Choptank River.  The early morning light was rich, the water calm and the sailing peaceful.  We have left anchorages in good winds, strong winds, and under power.  Leaving in a gentle breeze, moving at just a knot or two, is my favorite way to start the day. 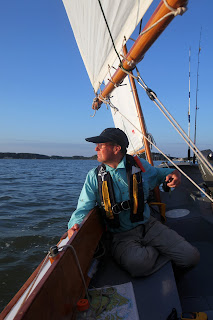 We had a couple goals for the day.  One was to have a nice lunch in Oxford.  The second was to reach Tilghman Island so we could tie up in a marina and stay at the Knapp Narrows in for the night (and maybe have a nice dinner at a local restaurant). 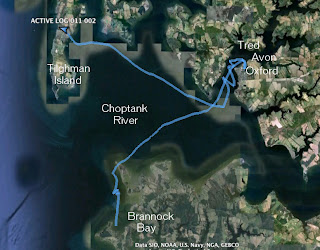 The light breeze picked up, then fell off on the approach to Cook Point.  We struggled to round the point, the water and the wind (and the sailors too) were confused.  Maybe it was the tide going against the wind, maybe it was confused currents at the mouth of the river.  We eventually motor sailed around the point and entered the broad mouth of the Choptank.

It as a morning of sailing, motoring, sailing as the winds seemed to come and go.  For a while the winds were ENE, the NW, then gone.  By sail and by power we found ourselves off of Benoni Point at the mouth of the Tred Avon River by 10 a.m.  When winds are light like that morning we tend to experiment with the camera.  Below is a self-portrail I shot while standing on the foredeck motoring up the Tred Avon. 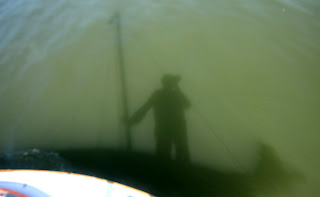 Reached Town Creek at 10:45 and headed to the fuel dock, taking on about 3/4 gallons of gas.  Then down the creek to Schooners only to find out that they were closed on Wednesdays.  But the manager was kind enough to let us tie up at his docks. 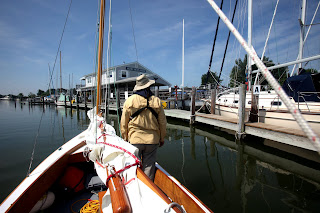 We walked the few blocks to the Oxford Market where we ordered sandwiches from their excellent deli.  Then we sat on the benches out front for a relaxing lunch.  Bruce, below, made a couple of phone calls home and checked his email.  Afterwards we went back into the market to buy some onions, potatoes and a very reasonably price frozen, vacuum packed bag of sirloin tips. 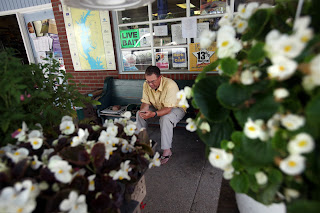 Oxford is a great little town.  It is very upscale, but in a casual sort of way.  Arriving by boat, regardless of income status, let us feel like we were part of the town for a short while. 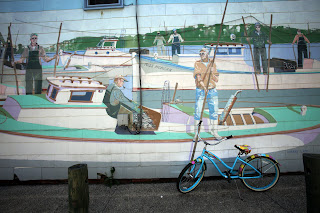 Back on the water at 12:25 and Bruce handle the tacking down the Tred Avon River in perfect form.  At Benoni Point the wind failed again and it was an afternoon of motor sailing down the Choptank.  Passing the mouth of Broad Creek at 3:00 the southwest wind finally filled in.

It was perfect timing as we looked to the west and saw the skipjack Rebecca T. Ruark, a passenger vessel now, coming out of Dogwood Harbor.  We turned in their direction to get a closer look, and we were thrilled to see them turn in our direction for a closer look at us. 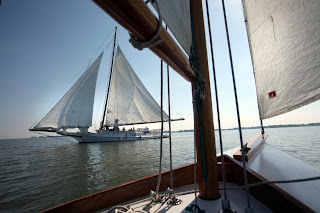 On our trips we "share" a camera.  Bruce provides the body, in this case a very nice Canon 5D, and a long lens.  I provide the wide angle lens, a 16 to 35 mm zoom.  And we take turns with the camera.  It usually works out fine but sometimes we have those great photo situations where we look at each other and wonder who should get to use the camera.  Bruce was at the tiller when we saw the skipjack so I made the first grab (ok, lunge) for the camera box.  I shot the skipjack coming across our bow, above, then relinquished (somewhat stubbornly) the camera to Bruce for the long lens photo, below.   Nice photo, Bruce, you gotta love those clouds!  Yes, we both want to shoot all the nice photos, but as Bruce has said before, our wives make us play nice.

It was a treat to trade tacks with the skipjack.  They came close enough to ask questions about the trip and wish us well.  One of the guys on the skipjack told us to keep heading west as they sailed east, they had a ratio of nine women to two men on the boat and he had no interest in changing those numbers.  West we sailed. 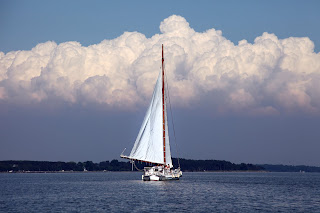 We left the skipjack lined up perfectly for the eastern entrance to Knapp Narrows, the channel that cuts across Tilghman Island.  I radioed to the bascule bridge and they opened for us without delay. 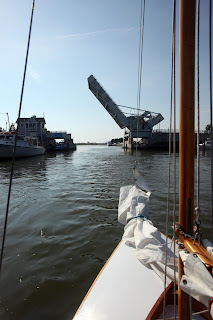 We had no reservations at Knapp Narrows Inn but being a weekday before the summer season they had plenty of room in both the marina and the inn.  We got tied up and then carried our gear to a nearby room. 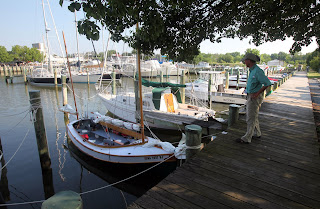 Dinner was at the Bay Hundred restaurant right there at the marina.  I had heard over the years that the restaurant had gone through several changes in management and food was, at times, inconsistent.  We were there at the right time as our dinners were outstanding.  Bruce had ahi tuna, I had a very spicy clams and linguine with white sauce (I don't think I've had it prepared any better than that). 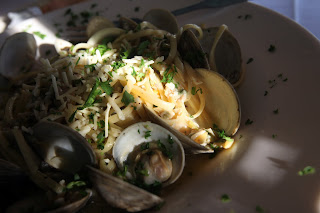 And then the chores - laundry, drying out the gear, refilling water bottles and setting up the boom tent for the night.  The two glasses of wine with dinner caught up with me and I lost all my energy.

I slept that night with no dreams.  But who needs dreams when you are on a trip like this.

Thanks for the great day.