Day Four, the bamboo channel and the Little Choptank

The severe thunderstorms passed through late evening, around 9 or 10 pm, but mostly to the south of us. There was a little lightning to the north, but skies over our anchorage stayed clear.  It was a very peaceful evening. 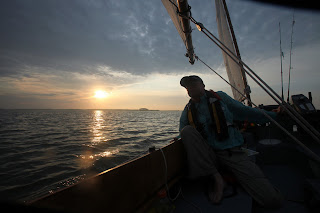 Feeling well rested from our afternoon off the day before, we sailed off anchor at just after 6 a.m. with a breeze out of the west. We made about three knots across the Honga River.  Approaching the Hoopers Islands the wind failed and we motor sailed for a while.  Always on the lookout for a nice sky, Bruce captured the photo below. 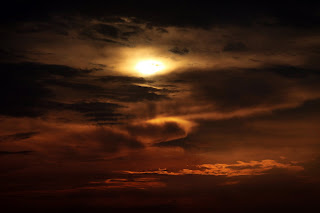 A couple of deadrises were working their crab pots, this one to the north of us as we headed under a freshening breeze to Fishing Creek.

I always keep a notebook close by when sailing, there I am below making some notes as we passed beneath the bridge at Fishing Creek.  I think I was making notes about a tiny little cemetery set back in the trees on the island to the south. 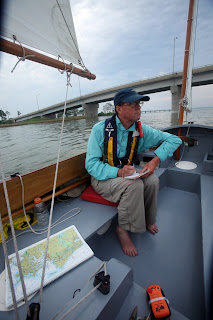 We followed the winding channel out of Fishing Creek, I had passed through the same area last fall and noted some shoaling within the channel.  This time we noticed some fresh markers like those to the right of the channel marker in the photo below. 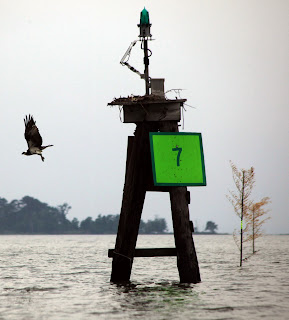 As we rounded a dog-leg in the channel we saw that it was lined with dozens and dozens of these markers.  Bruce was the first to recognize that they were in fact made out of bamboo. 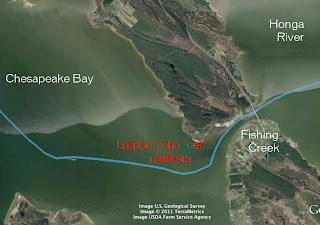 It turns out the navigable part of the channel was about one-third the actual width of the marked channel, these bamboo stakes showing the way.  It was an unreal scene.  It must have been done by the local waterman.  Maybe they realized that dredging of their channel was very low on the priority list.  The wind had picked up coming out of Fishing Creek so we had cut the engine and were sailing the gentle curves through the bamboo markers.  That is a sail that I will remember for a long time to come. 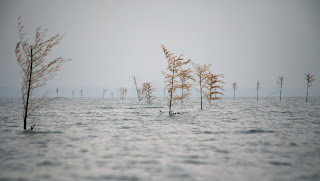 Once out of the channel we turned north with a decent breeze towards the Little Choptank River.  It was relaxing sailing for a while, but unfortunately the breeze did not last.  By 9 a.m. we were under power again.  That morning sail, from Fishing Creek to the Little Choptank, had the least wind of any sail during our trip.  We motor sailed most of the way, but it was the outboard doing all the work.

We cut behind the shallows of James Island, still under power, and turned east on the Little Choptank.  Finally, towards the mouth of Slaughter Creek, the wind filled in and we got back to sailing. 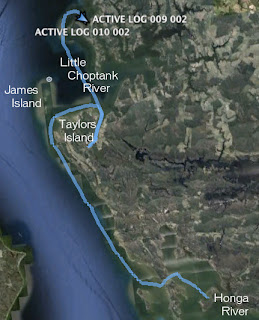 For a moment there I even though I had a fish on the line.  But no such luck. 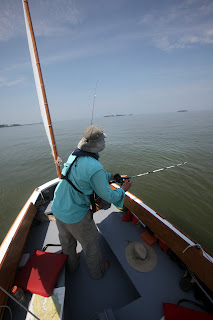 We sailed south to Slaughter Creek Marina but found both the restaurant - Palm Beach Willie's - and the marina store close.  No problem.  We got back on Spartina and motored around the corner to Chapel Cove Marina.  We tied up at their dock, below, got the ok from a bait shop to leave the boat there and walked next door to The Island Grille for an excellent lunch.  Bruce had a caesar salad topped with ahi tuna, I had a crab cake sandwich and fries. 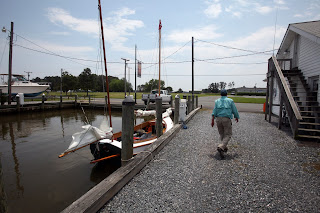 We were back on the water with a nice breeze by 2 p.m., sailing down Slaughter Creek and across the mouth of the Little Choptank towards Hills Point.  I checked the weather radio on the crossing only to hear that severe thunderstorm warnings were again in effect for the afternoon.  We opted to continue sailing as there were several places to seek protection along the way.

We rounded Mills Point in a light rain shower just before 5:00.  The rain ended just as we dropped anchor behind a tall stand of pine trees in Brannock Bay.
There we had a nice dinner accompanied by refreshments that we had picked up at The Island Grille.  The waitress was nice enough to throw in a couple of limes to go with the Coronas. 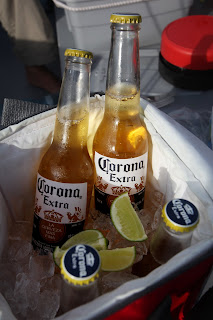 That's me below putting the anchor light on the jib halyard.  It had been another nice day of sailing - and we weren't even to the halfway mark on the trip. 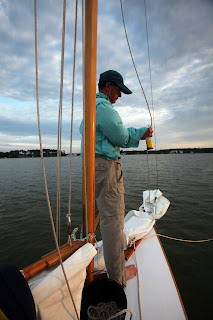 I'll be sad when this trip is over! So another question: what's the strap I see around the orange Spot tracker or the GPS? Does that hold the device to the boat? Or perhaps some flotation to the device?
G

Ginger,
I've never been happy with the clip on the back of the SPOT, it seems very light weight and breakable. So I put some line and a clip on there, the strap is a heavy duty cable tie that holds the line in place. Not elegant, but it works. Typically we hook the line around a cleat next to the cb trunk. steve

I've been following along on the charts now that you're into the Maryland waters I have charts for. Question: on my chart that includes Fishing Creek - on one place it says "Vert Cl 24ft" for the bridge and in another it has a box with an arrow tht points to the bridge that says "bridge open 24 hours". Is it a drawbridge? BTW you guys live right. I saw the pick of the Coronas and thought that was from the restaurant. It wasn't until I read the text that I realized you had them staged in the cooler on the boat for the photo. Looks like a magazine shot out Better Homes and Boats or something. More great photos. Love the shots of the bamboo markers. I'm imagining the time and care it took to place them. What was the distance the channel was marked that way?

Love the bamboo story. And with the photo I can vividly imagine how that must have felt sailing through them. Isn't it funny how something so simple, and just a little out of the ordinary, can create such a strong sensation. Like the very best of what conceptual art tries to do, but done by watermen.

Barry,
you are right, the bamboo markers were fascinating. Words failed me on describing it, but Bruce's photo captured it perfectly.