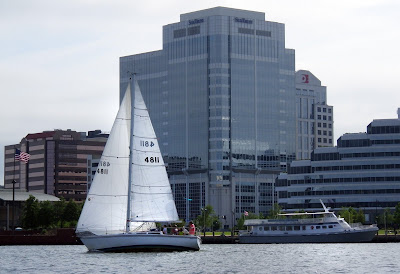 I had a very nice daysail yesterday.  It was overcast and the wind was blowing out of the west.  A stronger and cooler wind than I had expected, it felt as if it was about to rain.
There must have been some sort of regatta going on at Hampton Roads harbor a few miles down the Elizabeth River.  All morning long a steady stream of 30 to 40 foot boats came out of the marinas and headed west.  I had plans to be at home early in the afternoon so stayed down near ICW mile marker zero, finding myself content to tack back and forth watching the passing boats. 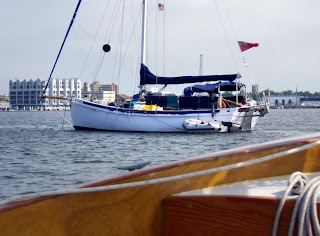 I visited Crawford Bay, the anchorage for cruisers, to take a look at this week's cruising fleet.  The cutter above, Alice of Penrhyn, will be one of my favorite cruising boats seen this summer.  She is a Bristol Channel Cutter 32.  I have seen and admired the BCC 28's designed by Lyle Hess.  I read that he had designed a 32 foot version but did not know that any had been built.  I'm glad to have seen it.
This was my first geography lesson of the day.  The home port was listed as Beaumaris.  After having read countless books about sailing all around the world I thought I had heard of most ports.  But not this one.  A little research when I got home showed me that Beaumaris is a town on the island of Anglesey in Wales.  And more research continued the Welsh connection - Penrhyn is the name of a castle built in the 1780's in Wales.  I said a quick hello with the owner, a moment to trade compliments and well wishes, then sailed on. 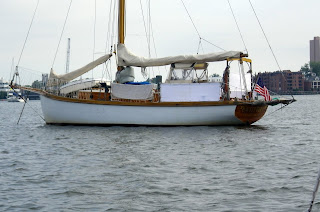 I later saw the owner of the BCC rowing his dinghy over to this nice wooden cutter - Paviti Tern out of Westport Point, Ma. 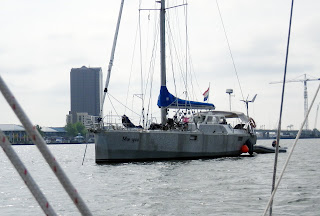 Of the nine boats in the anchorage two were from the Netherlands, Mauyva, homeported in Amersterdam, and another boat that I did not photograph.  Then I saw I third Dutch boat, a very serious world cruiser call Abel T. from Makkum.  I did not know where Makkum was, but recognized the flag as being the same on the other boats.  The internet later showed me that Makkum is in the Friesland area of the Netherlands, the very place where much of the action of classic spy and sailing novel The Riddle of the Sands takes place.  While the boat was very serious looking, the family aboard looked very friendly and relaxed.  I found, but do not know how to translate, their blog. At least you can see a photo of the family there.

Sometimes I feel like the character in The Shipping News, keeping track of the boats in the harbor.  I don't know why I enjoy getting to know something about these boats - I just know I enjoy it. 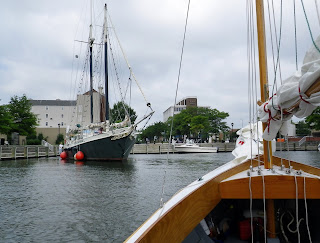 Eventually I headed east on the Elizabeth River and entered the High Street Landing in Portsmouth, right behind the schooner Spirit of Independence.  I've enjoyed seeing the schooner for a couple of years now, we've traded tacks a few times.  I tied up nearby to get a sandwich from a coffee shop.

While I was having lunch on the docks the schooner's owner walked over and introduced himself.   We exchanged phone numbers and have made plans for some sailing together - he'll have me as a guest on the schooner for part of a day, then we'll switch to Spartina where he will be my guest.  Sounds like fun to me. 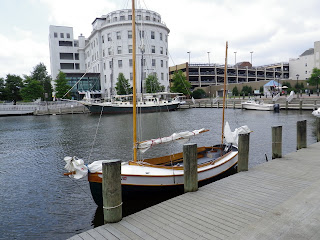 Mixed in with all the sailboats were a large number of commercial boats including this freighter below.  Barges, tugboats and all sorts of work boats, it was a busy day on the water.  The wind pick up in the afternoon and I decided to head back to the ramp. 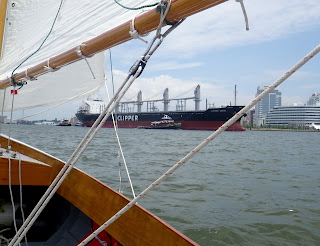 We had Father's Day plans for the evening.  The celebration included a card from my daughter admitting she was difficult, challenging and a real pain in the butt to raise, but it also pointed out that I was no cake walk myself. 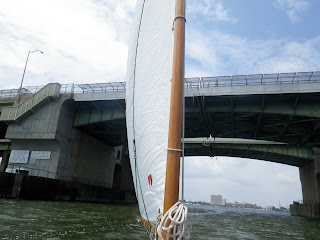 Watching other boats come and go is an essential part of why some of us go sailing.

The Abel T is on a 18 mouth Atlantic cruise - load up Google Chrome when you go to a foreign blog just wait a few seconds while it translates - not perfect but good enough.

The Bristol Channel Cutter is a hard boat to beat. Pretty and weatherly, what more could a man ask?
I use Google Translate, which works fine for a couple paragraphs at a time but is tedious with an entire blog.
I'm on a mission to convince bloggers I appreciate to provide a translator widget for us monoglots.
One World!
I put a translator on DoryMan and it works great (translates the whole blog to the language of choice), but the widget instructions are in English, so go figure.
michael

I'm in two minds about Channel pilot cutters, I love the look of them and especially Lyle Hess's interpretation of the BCC, BUT the best boat we ever sailed both offshore and coastal was our Vnad de Stadt Legend, medium to light displacement, narrow beam, easily driven - not a looker or spacious but she sailed really well, forgiving, comfortable, fast and hove to in a gale of wind under reefed main - simple, everything inboard and accessible - The heart says BCC the mind says something else - too many boats too little time (and money!!) maybe Steve has the best idea!

i grew up not far from Beaumaris - a mystical part of Wales, full of ancient castles, stunning scenery, extraordinary sailing grounds (try going through the Menai straights when the tide is going the wrong way to the way you are!!)
We used to play in the grounds of Conwy Castle....for real!! Real medieval warriors stuff!
I was at the investiture of Prince Charles, as Prince of Wales in Caernavon Castle just across the way and along a bit from Beaumaris
thanks for making me remember some childhood memories

The Alice of Penryhn and Paviti Tern sailed north to Cape May together. Paviti Tern is a John Alden Cutter, she is not gaffed rigged! Built in 1938 in Fairhaven MA and restored by me in 2005. She has been sailing back and forth between Bahamas and New England for 5 years single handed. Alice is fairly new being built in Malaysia. Andy bought here there then restored her in Penhryn England. She is a fine cruising boat and fast!

Good to hear from you. Beautiful boats! That was one of my favorite sails of last summer. And thanks for the correction, I'll fix it when I get to my laptop. Will we see Paviti Tern again this year?