Day Seven, back to Tilghman Island 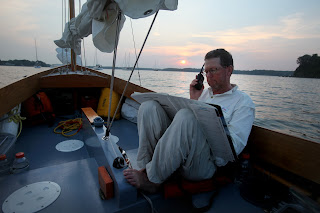 Day seven started calm and clear.  I really like this photo that Bruce shot of me, above, as I listened to weather radio and looked at the charts for our sailing options for the day.  (Check out how clean and organized that cockpit is after six days on the water.  Pretty good, don't you think???)  At this point in the trip we had a day to spare.  I always build an extra day into a trip for weather holds, but had not needed to use one.  So where to go?  We decided to head east across Chesapeake Bay to Love Point at the north end of Kent Island.  Once there we could head north to Rock Hall and a good crab cake at Waterman's, or head south to Kent Island Narrows and then eventually Eastern Bay.
The weather forecast made our final decision for us - chance of severe thunderstorms, possible tornadic activity and possible activation of spotters (tornado spotters, I'm guessing).  That meant we would be heading south in the p.m. where there would be much more protection. 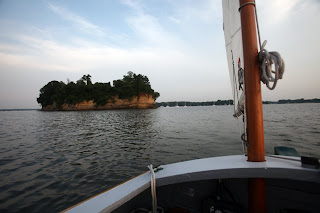 It was one of those peaceful sails off the mooring just after 6 a.m., a light north wind carrying us at a knot or so from behind Dobbins Island.  There is the island above, you can see some of the overnight fleet to the right (north) of the island.
Out of Sillery Bay the north wind picked up, our speed going from 3.4 knots to 4.8 knots as we approached Mountain Point at the south end of Gibson Island and the entrance to the Bay.  It was shallow and choppy, crowded with crab pots as we rounded the point.  Soon we entered the calm Chesapeake Bay. 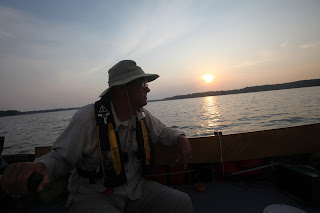 By 7:30 the wind was gone.  We were out on Bay with two shipping channels to cross.  So we cranked up the outboard and headed east.  Not 30 minutes later the wind filled in from the south and we were sailing again toward Love Point. 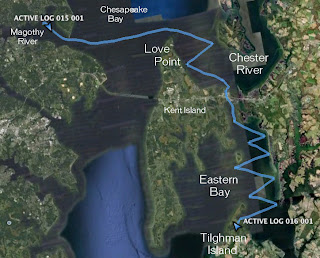 We rounded the point at 8:40 with the south wind increasing, tacked across the mouth of the Chester River at 4.5 to 5.7 knots.  It was a great ride.  Bruce and I took turns at the tiller, alternating the tacks as we sailed south to the narrows.  It was rough out in mid-river and the bow of Spartina threw out lots of spray as we crashed through the chop.  Nearing Castle Harbor the water calmed a bit, but still plenty of wind. 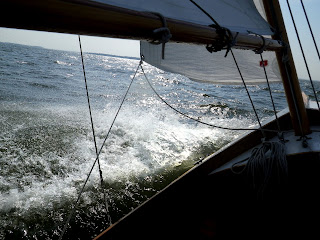 About 10:30 we approached the entrance to the Narrows.  A few oyster boats had their conveyor belts down in the water near the channel markers, a line a power boats approached from the north.  Coming up on the holiday weekend I knew there would be lots of traffic.  A half dozen 35 foot or so power cruisers arrived at the channel markers right behind me.  But there was also a boat being towed into one of the marinas.  The boat being towed was of course slower that the other boats, the captain of the tow boat moved just outside the channel to let the other boats through.  We moved over and followed in the track of the boat being towed - plenty of water there and we would not slow down any traffic. 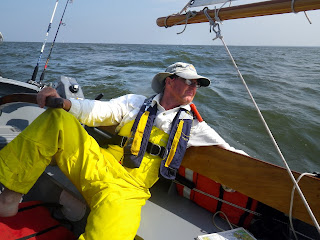 By 11 a.m. we were tied up at Red Eye's Dock Bar.  We asked if we could leave Spartina there for a few minutes for lunch, they said leave it as long as you like, no charge.  So off to Harris Crab House for a couple of soft shell crab hoagie's.  Life was good. 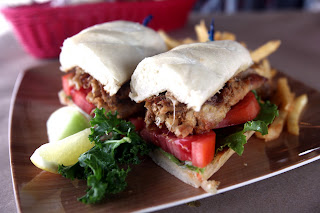 After picking up ice and a few supplies we were back on the water at 12:20 and powered under the Kent Narrows Bridge into both strong wind and current out of the south
. 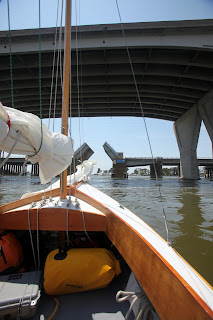 The afternoon on Eastern Bay was a series of long tacks with steady wind and warm sunshine.  The sky was blue with white puffy clouds, no sign of the severe weather.  We watched as a seaplane made a series of touch and go's off of Piney Point. 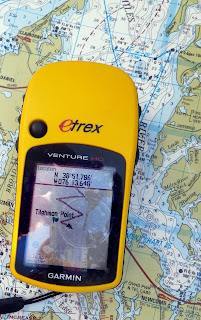 The nice lunch caught up with us both.  Bruce slept while I sailed, I slept while Bruce sailed.  We trolled all the way down the bay, but no luck.  We had done pretty well here a year and a half earlier. 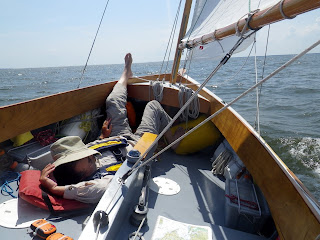 By 4 p.m. we were approaching Tilghman Point at the very northern end of Tilghman Island.  We saw a couple of possible anchorages on the charts and decided to try the very first one - Tilghman Creek.  It was a narrow entrance channel, we started the outboard and dropped the sails while forgetting about the trolling line.  As we motored in I noticed the fishing line being pulled taught and knew right away what I had done.  Bruce shut off the outboard, I cut the line and checked to see that prop spun freely.  It did.
Then we headed up the creek looking for an anchorage.  Bruce spotted a cove off to the west but I could not see it clearly, in fact I never quite recognized it until I looked at google earth just now.  Sometimes I lose depth perception when looking at shorelines.  None the less we anchored in a comfortable private spot and enjoyed the evening. 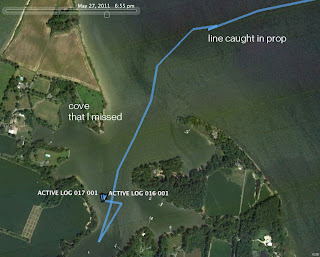 Dinner was the sirloin tips we had picked up in Oxford - excellent - plus potatoes and onions, all washed down by ice cold budweiser bought at Red Eye's in the Narrows.
Below you will see me that evening after an impromptu swim.  I had allowed a plastic bag blow overboard and jumped in to retrieve it.  The water was warm, the swim relaxing.
Later than evening thunderstorms passed up the Bay just on the other side of Tilghman Island, we stayed comfortable and dry in the creek.  A very peaceful evening after a good day on the water.
steve
distance traveled   36.4 nm
average speed         3.5 knots 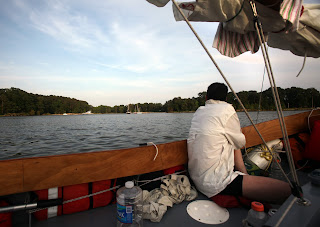