This is a screen shot showing a ECMWF for later this week in the Outer Banks.  The letters stand for European Centre for Medium-Range Weather Forecasts.  I do not understand the science behind the map, but the image does not bode well for the Outer Banks. I am reading comparisons now with the Ash Wednesday storm of 1962, one of the most destructive storms to hit the Mid-Atlantic area.  It is easy to assume that hurricanes do the most damage in the Outer Banks, but locals will tell you that it is the "no name" storms, the winter nor'easters, that they worry about most.

The Ash Wednesday storm was slow moving, lingering for five high tides over three days.  This current storm, while moving quicker, could be more intense.  Predictions include gale force winds over the sounds, storm force winds just offshore, sound side flooding and destructive waves from the ocean.

That is just a forecast.  Let's hope it doesn't come true. 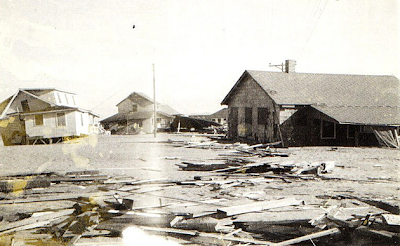 What the F do the Europeans know about East Coast storms? I'd batten down the hatches regardless.