Day Six, across the Bay to Dobbins Island

We carried our gear from the hotel room, packed Spartina and cast off from the dock at 6:30.  Or we tried to cast off.  I put the outboard in reverse and tried to back out of the slip but the boat would not move.  The mast or maybe a halyard had hung up in a tree that reached out over the slip.  Bruce used the boat hook to free us and we were on our way. 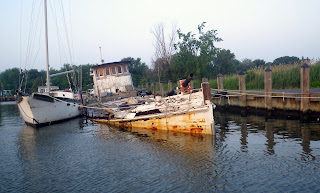 We passed by some of the old work boats in the harbor on Knapp Narrows and headed west towards Chesapeake Bay.  Well rested after a good night at the inn, it felt good to be out on the water.  The last time we had headed west out of Knapp Narrows there had been quite a bit more wind.  This time it was easy, wind out of the south at 10 knots, calm water and the feeling that we knew our way around. 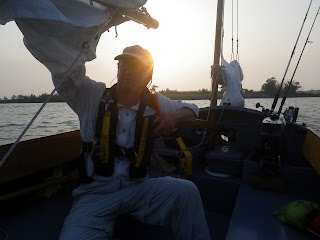 We turned north, a peaceful downwind sail inside of Poplar Island.  We were wing and wing by 7:30, the north end of Poplar Island to the west and Bloody Point, the southern tip of Kent Island, in sight to the north.  By 9:00 we were passing Bloody Point to our east having decided to head north on the Chesapeake Bay.  The water was choppy around the shallows near the point, but we soon found ourselves in calm water as we passed over the deeper water of Gum Thicket.  The trolling line was out over the steep dropoff, but no luck on this day. 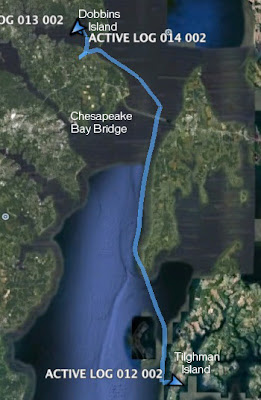 Through the haze we soon spotted large ships, about five or six, anchored on in the Bay.  We talked about watching for the ships in the channels, trying to keep an eye on the commercial traffic. 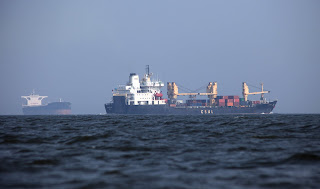 Then out of the haze the Chesapeake Bay Bridge appeared.  Annapolis on the west side of the bay and Kent Island on the east side.  Both the wind and the current from the south, it was an easy sail at 4.5 knots through the eastern channel. 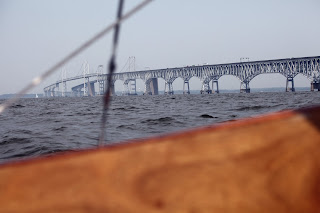 About a mile north of the bridge we turned west toward the Magothy River.  Anyone who followed my planning for this trip will notice that I had not talked at all about crossing over to the west side of the Bay.  But with good weather we had found ourselves with an extra day to sail.  And I had researched the area a year or two before when considering such a trip.  A quick glance at our charts and my research came back to me - there was both a good restaurant and good anchorage to be found on the Magothy River. 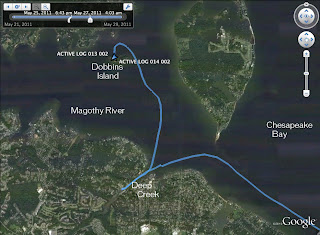 The wind picked up as we neared Sandy Point at the mouth of the river.  We sailed with the wind on the  port beam doing a steady 5 knots close to shore.  We ran alongside a deadrise, two guys on the top tossing crab pots over the side as the captain below shouted "Throw!".  A Pacific SeaCraft Dana 24 sailed north of us on the same tack, a reef tucked in her main (and I was happy to note we were still under full sail). 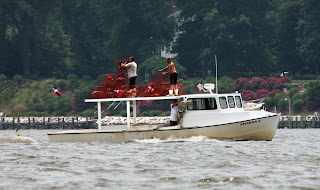 A few miles upriver we picked out the entrance to Deep Creek, dropped the main and the mizzen and headed up the creek under power.  This was a heavily populated stretch of water, lots of piers and big homes, community beaches and a few old cottages here and there.  We tied up at Deep Creek Marina and Restaurant - an restaurant that dates back to an old bar/fish fry joint from the 1950's - for lunch.  Great meals for us there - I had a Cobb Saland and Bruce had a Caesar Salad with crab cake on top.  When we left we picked up a six pack to go - Bruce asked for Guinness, which came only in a four pack, so they threw in a couple of Corona's and a much needed bottle opener.  This was my kind of restaurant.  There is Bruce, below, on the docks with the restaurant in the background. 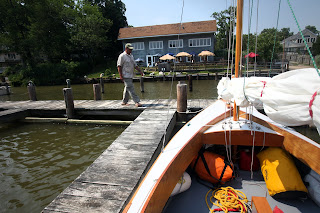 After lunch we motored to the middle of the creek, raises the jib and sailed downwind back to the Magothy River.  I thought about raising more sail once on the Magothy, but there was no need.  The south wind carried us across the river to Dobbins Island - our anchorage for the night.
I had picked out the spot based on the charts, figured it would be an excellent anchorage.  But I did not realize it was a popular anchorage.  A dozen big sailboats were anchored out offshore, four or five power boats were in near the beach with plenty of people having fun, drinking beer and having cookouts.  It was a big change from the quiet coves on the other side of the bay.  I hopped in the water for a swim, Bruce relaxed and took some photographs. 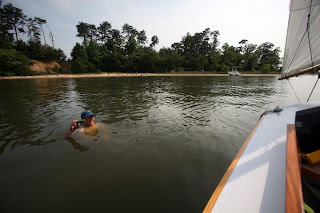 With our late lunch we decided to skip dinner, making do with anchovies, oysters and crackers......and the beer packed in our cooler with crushed ice.  A perfect way to end the day. 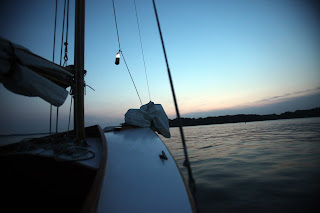 Below you can see the anchor lights of the weekend fleet.  Anchoring out with all the boats was different, fun and interesting.  I'm not sure we would do it all the time, but I'm glad we gave it a try. 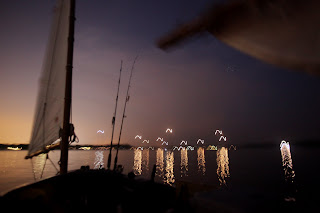 I tried to comment yesterday on a skipjack photo of yours, but I mashed the wrong button and my comment disappeared. Just wanted to say that a Chesapeake Bay skipjack is about the prettiest thing I ever saw. It must be handfull to sail with all that area of canvas and long boom. Thanks for all the lovely photos! I even plan to try some anchovies soon. :-)
G in NC

It was a treat to see the skipjacks, both the working vessel and the tour boat. I was thrilled that we came across one under sail.

The most beautiful thing I have ever seen is Pride of Baltimore II leaving the Magothy River popping her sails and then going out into Craghill Sound toward the Baltimore Light full sail. It was ahhhhmazing!

Thanks so much for your journal about the trip up to Dobbins, Steve. The story and photos were very interesting. I have lived on the Magothy since 1957 long before there were a lot of piers and there were only cottages along the shoreline.

BTW--The Hilda M. Willing, a skipjack named a national historical landmark by the US Park Service, used to dock at Deep Creek Restaurant where you had lunch. Capt. Barry Sweitzer had purchased her from his father who had her for 53 years and revolutionize how skipjacks were used for oyster dredging. Barry had her for 11 years until the situation with oysters in Maryland became so frustrating that he finally sold Hilda. We also get visits from the schooners the Mystic Whaler and the Lady Maryland on occasion.
http://www.nps.gov/maritime/nhl/willing.htm
http://www.mysticwhalercruises.com/
https://livingclassrooms.org/ourp_baltimoreshipboard.php

that is a beautiful area up there. I need to get back there someday. Just overnight on the river was too short.

Thanks for the links. I'll check them out when I get back from sailing today.