return to Hatteras, return to normal

A nice day trip today down to see friends in the village of Buxton on Hatteras Island.  A few I had not seen for many months, others a couple of years.  It was a nice visit.  The weather was classic Outer Banks - overcast, windy, foggy, sunny and warm - all in one day. 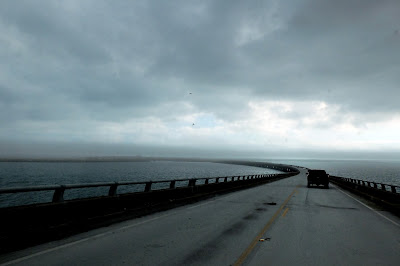 It was one year ago tomorrow that I was on Hatteras Island to look at the Hurricane Sandy damage to NC 12, the road that runs the length of the island.  We had Thanksgiving coming up on Ocracoke and I was curious to see if the road was passable to get to the Hatteras to Ocracoke ferry.  The highway just north of Rodanthe was passable but only for four wheel drive vehicles and then only at low tide when the surf was not too big.  In reality was that the road was broken and the right of way was in the ocean. (We reached Ocracroke by way of a three hour drive and a two and one-half our ferry ride.)

NC 12 is in good shape today, thanks to a lot of hard work to rebuild both the road and the protective dune line.  And thanks also to a quiet storm season.  Nothing close to a tropical storm approached the Outer Banks this year.  That is not to say all was quiet, as this sailboat on the beach today shows.  I'm told she was one of six sailboats that found themselves in trouble off of Hatteras about a week ago, part of a sailing rally to the Caribbean.  All crew members were rescued by Coast Guard air crews out of Elizabeth City.  Two boats, including this one, found their way to the beach on Hatteras. 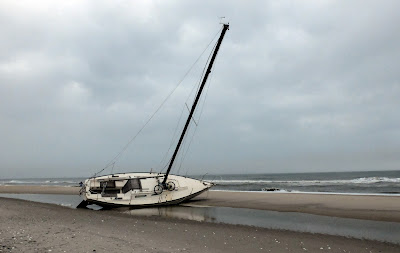 My life is returning somewhat to normal after six weeks of living in a construction site.  The day after returning from the fall sailing trip to Beaufort, a construction foreman showed up at my front door.  Three days late another man arrived carrying a sledge hammer.  Ever since then we have been living in the middle of noise, dust and strangers as we had our kitchen and living room remodeled.  It is now nearly done.  And I can sit at my kitchen table near the bay windows and type on my computer.

So maybe it is time to open my notebook and log book from the fall cruise, take a look at the photographs and study the gps track, just to see if I can remember it all.

(Since this is a blog about sailing and not food, I will not mention that the first meal on the new gas range was seared scallops with parmesan risotto and oven roasted mushrooms, asparagus and grape tomatoes.  No, that shouldn't be discussed here.  Second dinner was roasted chicken with blistered green beans and golden yukon olive oil mashed potatoes, but I won't mention that either.)

Interesting cuisine highlights travel, adventure and days of note. The happy burble of a hull
as it swims through the water, the sun bursting off the wave tops in a spray of gems, the thrust of a well trimmed sail, birds wheeling in the sky, wind
tugging at your clothes, a boat provides happiness for your soul just as good food provides for your taste buds. Hand in hand they coalesce into a marker. A marker that will form a memory of a "day of days" when the body becomes weak and the mind tired.
Kindly continue to include your culinary exploits. They enhance
my vicarious enjoyment of your exploits. As an aside, watch Anthony Bourdain's "No Reservation" on the Travel Channel to see how interesting food punctuates interesting places!
Karl Brohan (Melonseed, Pic Nic Cat, Force 5 and a Storm 17 abuilding...