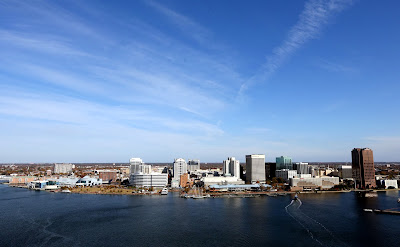 I had an occasion to visit a penthouse apartment on the Portsmouth waterfront this morning, finding a spectacular view from 25 stories above the Elizabeth River.  That is my day sailing territory on the Norfolk waterfront in the photo above.  I do hope to have Spartina out there this coming Friday should the forecast for decent weather hold. 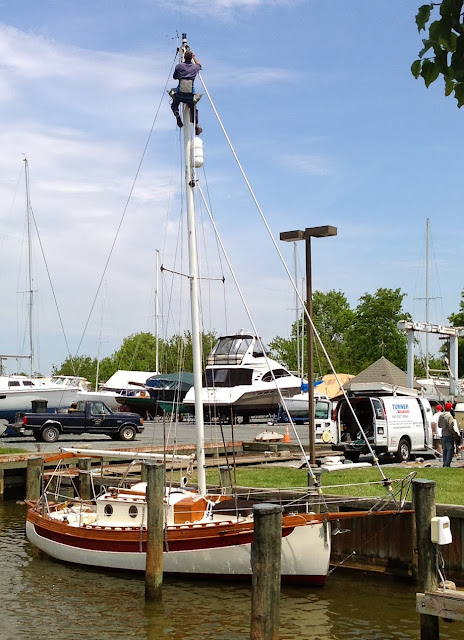 Patrick, who lives in Avon on Hatteras Island, had his own penthouse view in this photograph he sent of the Falmouth Cutter he and his wife Johanna brought down from Tilghman Island this year.  Patrick has been in touch a few times over the last few years - we have common interests in boats, Hatteras Island and, at times, the hurricanes that visit Hatteras.  He wrote just a few days ago to say the beached boat I mentioned in my last post was not part of the recent spate of coast guard rescues, but had instead arrived on the beach a few weeks earlier.  It is hard to keep track of the shipwrecks, both new and old, on the Outer Banks.

Looking at Patrick's earlier emails I remembered that we have at least a couple of acquaintances in common.  He and his wife, while living on a 34' Tartan in Opua, NZ, met circumnavigator, author and friend Webb Chiles.  And recently they met Mary Hadley, who runs the boat yard in Elizabeth City where I kept the original Spartina.  Knowing how tight knit Hatteras is, I suspect we share some friends there too.

Down in Buxton the other day I considered having lunch at Pop's Raw Bar, where I have had a few post hurricane meals.  I chose to go elsewhere that day, but next time I'll visit Pop's and maybe take a look at Patrick's cutter in the harbor just on the other side of Hwy 12. 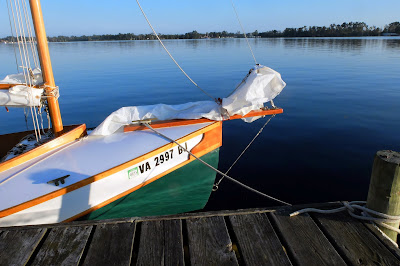 I have scaled back my plans for painting this winter.  I had been considering sanding down the entire hull of Spartina and repainting, which does not sound like much fun.  After look at the hull, I've decided to do a light sanding over much of the hull, and save the heavy sanding, patching, priming and painting for the few areas that really need it.