It looks like I might be sailing solo on the fall trip.  Bruce and I compared schedules yesterday and they were not compatible.  Work has me locked in to a narrow time frame for a cruise, Bruce has some family commitments.  Things may change, in fact I don't need a firm commitment until early September.  But as it looks right now I will be doing a single-handed cruise. 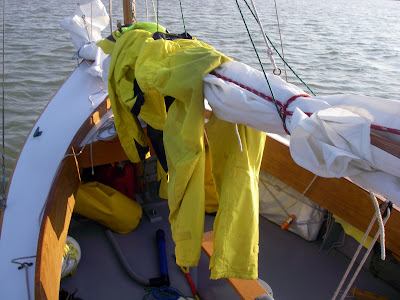 Most likely I'll be returning to the Eastern Shore of Chesapeake Bay, sailing north from the bottom of Tangier Sound to Oxford and/or Tilghman Island on the Choptank River.  It will be similar to the cruise I did last September.  Here are a few of my reasons for returning to the same sailing area... 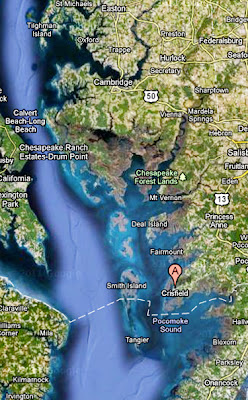 So I'll get out the chart book, begin tracing the path.  Great Fox Island?  I haven't been there since my first sail in Spartina in '07.  Crisfield?  It has been a while.  Rippons Harbor at the south end of the Hooper Islands?  I've only seen it from across the Honga River, never took the time to visit.  Maybe I will this fall.  The Little Choptank River?  I've just explored the mouth of the river, I need to sail back into Fishing Creek and Madison Bay to have a look around.

While Bruce was saying he could not make it this fall, he did suggest we think about completing our circumnavigation of the Delmarva Peninsula over the next couple of seasons.  Right now we have covered Onancock north to Rock Hall.  Next fall maybe we'll sail from Rock Hall north on the Bay to the Chesapeake-Delaware Canal, then south on Delaware Bay to Lewes.  The following year, sail down the ocean side of the peninsula from Lewes to Cape Charles, then up the Bay to Onancock.  That sounds like a plan worth considering.

You could hold a lottery with the prize being that the winner gets to accompany you on the trip. I'm sure most followers of your blog would leap at the opportunity for a few days cruising the Chesapeake aboard Spartina.

Of course, you never know - you might be ready to toss the person overboard after the second day...

I can hear my wife laughing now -- spending time with me a "prize".

Now that I think about it, Bruce would be laughing too. And I'm kind of chuckling myself.

OK, well maybe the "prize" is the trip aboard Spartina. More about the boat than the pilot...