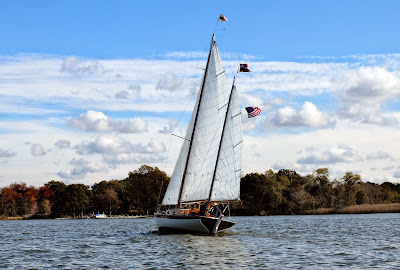 Mixed together here are photographs of three boats.  Spartina, of course, photographed with the GoPro camera on the Thursday and Friday of Downrigging weekend in Chestertown, and also Roger's Gwylan, a 1977 Herreshoff ketch, from Friday of Downrigging.  There is a third boat, all the way at the bottom, from the other side of the world. 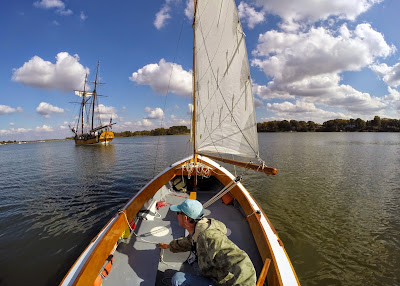 The best sailing days of the weekend were not the weekends days, they were Thursday and Friday with clear skies and a nice breeze.  Friday morning was a little chilly, but it warmed up quickly.  You will see a photograph of me wearing a jacket, gloves and buff against the chill. 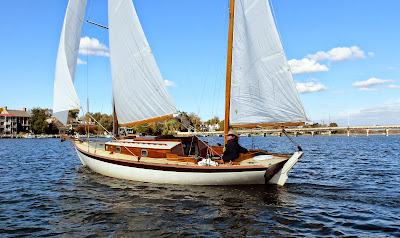 Saturday and Sunday the weather was, well, unfortunate.  Cold, rainy and windy on Saturday.  The bakery and restaurants were filled with people trying to escape the stormy conditions.  Sunday was cold, clear and very windy.  All sailing was cancelled for those days, for both tall ships and small boats like Spartina.  This forced me to be something that I am usually not: sociable. 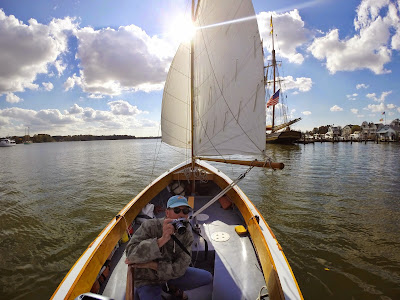 During the weekend I found myself in very enjoyable discussions with both old and new friends.  Dave and Huck, Fred and MaryLou, Brian with the catboat and Roger with the Herreshoff ketch.  Bob and Elizabeth with the beautiful Coble (the basis for the Pathfinder's design), who came by and hopped aboard Spartina for a few minutes. 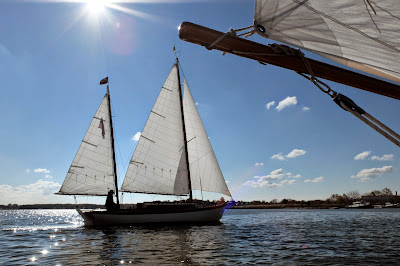 It was good to see Erik, captain of the tall ship Lynx; Kristen from the Chesapeake Bay Maritime Museum; Jamie, Starbuck, Aaron and Christine from the Pride of Baltimore II. 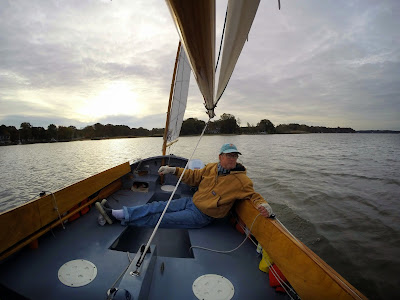 There was a chance meeting with Doug, a regular on Kevin B's spring floats, and of course brief visits with event organizer Drew, who is always calm while organizing everything from docking to bands to oysters in the swirling storm (this year, literally) of Downrigging weekend.  Add to all of those, countless people who stopped to say hello on the docks and have a look at Spartina. 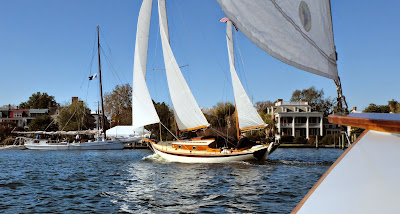 This is the boat from the other side of the world.   Webb Chiles, as he says, is"wearing" GANNET, his Moore 24.  This view gives an excellent interpretation of GANNET's size.  She is very small.  And she might seem even smaller considering that Webb sailed her 6,408 miles from San Diego to Opua, New Zealand. 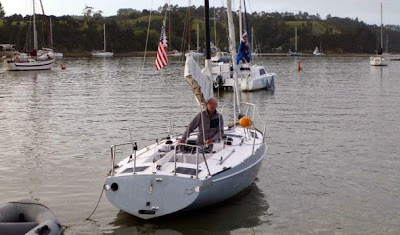 Because Webb broke one of his rules and invited me to sail aboard GANNET, and because I took some photographs on the sail that have been published with Webb's writings, I received a nice check in the mail.  I wrote Webb to thank him for the opportunity, telling him the check was quickly deposited in my cruising account.  Webb replied that his first thought was that he had never had a cruising account, but then realized that maybe that was the only kind of account he had ever had.

I could have stayed out on Spartina all day, Steve. We would have needed a cooler, however!