"skipjacks doing what they were built to do"

I rec'd a very nice email from Roger, owner of Gwylan, the 1977 Herreshoff ketch below, describing his sail from Chestertown to Oxford.  He made some nice photographs along the way.  With his permission, I'll share the story of his sail and his photographs below. 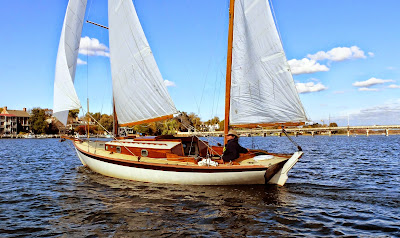 Had a fine trip back to Oxford.  Crept out between Sultana  and Pride II on Monday morning at 0630 with practically no wind so slid between their booms with no drama.  Motored down the Chester for a while as the breeze sneaked in and Sigsbee, Lady Maryland, and AJ Meerwald slowly caught up and overtook me.  Got a ton of pics of them in the great morning light that I have to send them, too. 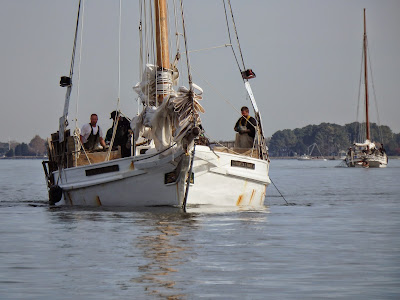 It then became a lot of wind, mostly on the beam, so really boiled along once I set sail, making 6+ knots with just the genoa and mizzen.  Motored thru Kent Narrows in late morning then set staysl, main, and mizzen and just rolled down Eastern Bay.  Got thru Knapps Narrows in late afternoon and anchored for the night in Harris Creek just before sundown. 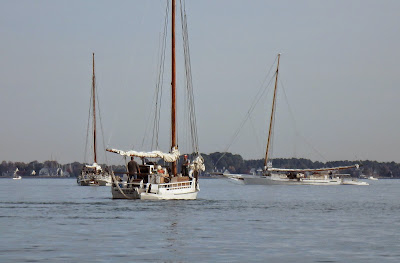 Then the next day it was just a couple of hours under power to Oxford, but detoured when I realized there were four skipjacks dredging an oyster bed in the Choptank just south of the mouth of the Choptank Light.  They were using their pushboats (no wind, and I'm not sure any actually dredge under sail now anyhow) and I took a lot of pics.  It was Hilda M. Willing (1905), Rebecca T Ruark (1886), Thomas Clyde (1911), and HM Krentz (1955) and just an unforgettable sight.  No tourists with cameras (except me), not a "re-enactment", just four skipjacks doing what they were built to do. 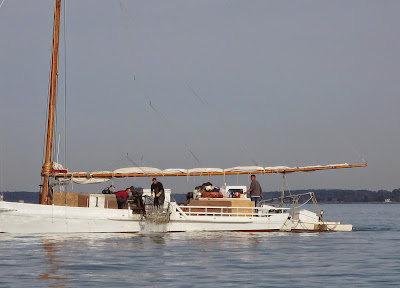 
I've had the pleasure of seeing skipjacks on on the water - out on the Choptank and Miles River - but never in a group and certainly never while they were working the oyster beds.  How cool.  Thanks for sharing, Roger.
Posted by Steve at 1:54 PM

Nice. He was an interesting character with a beautiful boat.

I'm glad he was there at the right time and the right place to capture the "Kodak moment" on camera for the rest of us, who will likely never see the same occurrence in our lifetime.