a tale of two boats

"It's very pleasant."   - Paul
"It's been brutal."  - Dawn
It was an interesting comparison today talking to SandyBottom and DanceswithSandyBottom.  Dawn is paddling a kayak, Paul and Alan are sailing the Core Sound 20 Dawn Patrol. 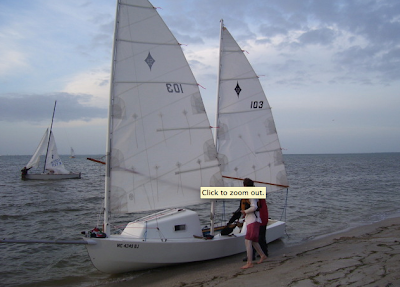 To begin at the beginning, Paul tells me that ten minutes before the start of the challenge he was told he needed to move his car.  "I just hated to lose the lead at the start," he said.  He had to run and move the van, get back to the boat and launch it off the beach with Alan.  He pointed out, though, that Dawn Patrol was not the last boat off the beach.  So they must have done pretty well.

(When I related the story above to Dawn a few hours later her response was a slightly exasperated "I knew he shouldn't have parked there!"  She said as she paddled away from the beach she looked back and could not find the sails of the cat-ketch rigged Dawn Patrol.  She thought they must have had a hard time getting the boat launched. ) 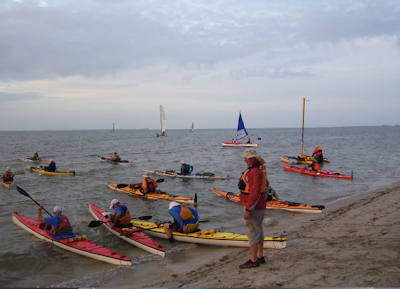 Wind made all the difference for the two boats.  Paul said he and Alan started sailing with the new spinnaker, hitting 10.2 knots with the new sail flying.  As the wind swung to the south they brought in the spinnaker and started experimenting with the staysail as a jib - and it worked!  Paul felt it added a knot or more to their speed as they tacked into the south wind offshore.  You can see their track below.

When I last heard from Paul, about 1:30 this afternoon, Dawn Patrol was 31 miles from Gasparilla Pass with an expected eta of 9 p.m.  I asked Paul what the weather was like - "White clouds, mostly blue skies."  It sounded just great out there.  (That's Dawn Patrol's track below) 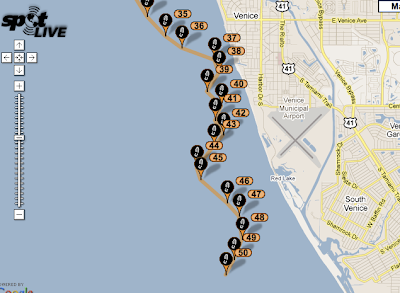 After hearing Paul description of a pleasant afternoon I was caught off guard when Dawn called and the used the word "brutal."  In fact she used it several times.  The wind, she said, was never really out of the east.  More like SE, veering to S and then to SW.  It was paddle into the wind and chop all day long.  When I talked to her at 6 p.m. she had been at it for 11 hours and planned to go at least another 6, maybe 8 hours before stopping for the night.
Sarasota Bay was the worst she said, chop and wind and paddling while feeling like you are not moving.
She called from a sandy beach at Blackburn Point near a swing bridge.  Dawn said she was feeling cold, decided to stop and put her night paddling clothes on, get our her headlamp and be ready for the night paddle.  At that point she had paddled 31 miles, 37 more to Checkpoint One.  She had been paddling solo much of the day as all the paddlers were spread out working their way into the wind.  Kiwibird was ahead of her, as usual.  And Dawn said some veteran ec'ers talked about dropping out of the race.  She could look back to the north and see several kayaks still working there way down the channel.
Dawn's voice was strong and, as usual, enthusiastic.  I told her she sounded upbeat.  "I can't get down now" she said, "it's the first day.  I mean we've got seven days of this, right?"  She'll send an "ok" signal from her spot when she sets up camp for the night, then hopes to be back on the water at 4 a.m.  It will be close making the checkpoint by the Sunday 10 a.m. deadline, but she says they are giving some leeway on the times.
So after a few minutes on the phone she said she was ready to get back onto the water and paddle into the night.  She was definitely ready to get back on the water, so a quick goodby and she was gone. (Dawn's track is below.) 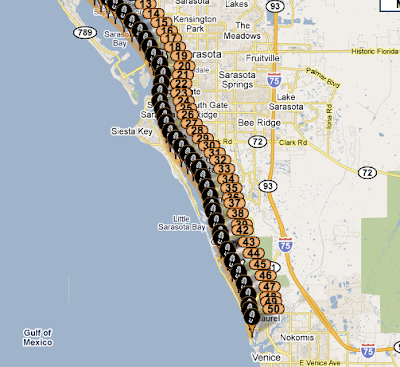 Below is the challenge map from about 8 p.m., you can see SandyBottom's and Dawn Patrol's relative positions.  Dawn said the forecast for tomorrow was about the same, so it might be another brutal day for her and maybe another pleasant day for Dawn Patrol.  And then maybe the wind will swing to the north as a front, or maybe two fronts Dawn said, pass through.
I'll post another update tomorrow.
steve 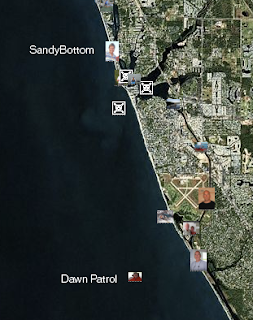