Good news, the SPOT tracking pages are now working again, and so is the challenge map.
Got a phone call from Paul, very hard to understand with all of the wind.  Dawn Patrol was lining up to sail under the Sanibel Bridge.  Wild morning, he said, on Charlotte Harbor and Pine Island Sound.  Sailing into winds 20 to 30 knots.  Top speed was 5.5 knots.  He thinks they might have a downwind run once they are back out on the gulf.
They arrived at CP 1 at 4:30 a.m. after finding themselves becalmed and in squirrelly currents off of Venice Beach. 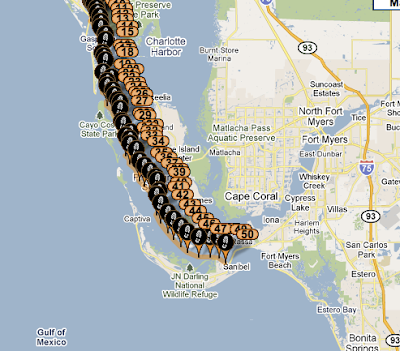 Dawn Patrol plans to sail without stopping to CP 2.  Paul said they were so preoccupied with sailing that they had not had time to measure the distance to CP 2 or come up with an eta.

Now that the spot track is back up I can see that SandyBottom is just now passing Bookelia at the very north end of Pine Island heading to Matlacha Pass on the east side of Pine Island.  I'm sure she is looking for a little more protection from the 20-30 knot winds that Paul was talking about.  She had said this morning that she was going to take a break mid-day and get some rest, but from the looks of it she has paddled continuously since getting on the water early this morning.