A little over two hours ago Mosquito threaded the channel to Chokoloskee, checkpoint 2 of the Everglades Challenge.  And about twenty minutes ago Alan and Dawn left the checkpoint to continue on their way. 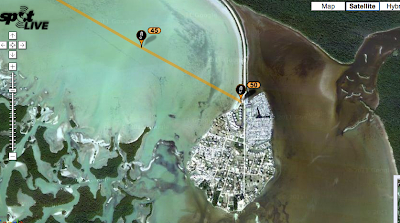 I noticed there was a delay in getting to Chokoloskee and I hope someday to hear about Mosquito's brief change of direction.  The trimaran was headed down the channel to the checkpoint, which would have been to the southeast, then turned northwest and apparently beached at a little islet.  Taking a break?  Doing repairs?  Converting Mosquito from sailing configuration to rowing?  Maybe Paul will be able to tell us.  After a while they left the little island and headed for the checkpoint.

Update from Paul about the brief detour (it is in the comment section below, but I'll paste here for easier access).....

Dawn reported thin water, fast current, strong headwind, narrow channels that made to transit difficult. They paused at that point because they were not making any forward progress there --despite exhausting effort. The tide was rising (high tide at 2pm) so taking a break may have been helpful; more depth being helpful.


I should have known it was a strategic break. 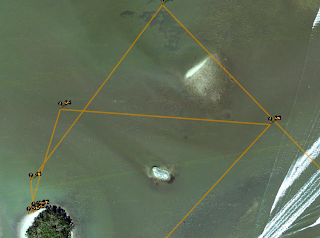 I have no doubt that Dawn was smiling as she and Alan sailed away from Chokoloskee.  It was there last year that Dawn concluded that she had to drop out of the race.  I remember talking to her on the phone that day, I was her shore contact, and she could barely bring herself to utter the words "drop out."  After a good night's sleep she told me the next day that dropping out was the right, but not necessarily easy, thing to do.  She talked about "next year" and here it is the next year -- and she's leaving the island behind.

Paul has been posting about Mosquito's progress, you can read the updates here.  He has been talking to the crew by cell phone and is probably the best source of information about the trip.

As for myself, there appears to be a chance to sail this weekend.  I need to finish packing the boat and crank up the outboard.  That should make for a fun evening. 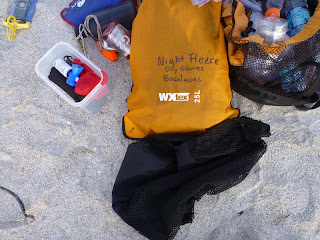 SB reported thin water, fast current, strong headwind, narrow channels that made to transit difficult. They paused at that point because they were not making any forward progress there --despite exhausting effort. The tide was rising (high tide at 2pm) so taking a break may have been helpful; more depth being helpful.
--Paul (DWSB)