the first sail, the first guest 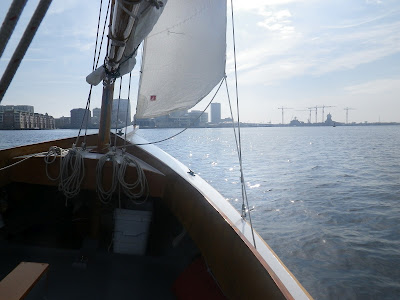 It turned out to be a beautiful day.  The wind was out of the south, stronger than I expected so I sailed downriver under mizzen and jib.  Rounding up to raise the main the sun broke through and blue skies soon follow.  It felt good to be on the water again. 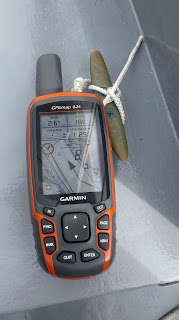 Everything on Spartina worked just fine.  I had tweaked the outhaul on the main and got a little bit smoother set on the gaff-rigged sail.  Though I did not need to remove the new deck slot cap to step the main, I was glad to see it "looked" good on the foredeck, fitting in with the hardware and mahogany coaming. (I forgot to take a photograph - you'll have to trust me on this.)

I set the new gps, above, to tracking and then followed my course on both the "map" page and trip computer that has speed/distance/time sailed.  Below you see my track exported to google earth.  It is a very typical track for my day sails on the Elizabeth River - just relaxing and catching the breeze, watching other boats (of which there were few) and tacking up and down the river.  I did about 14 miles - up and down, back and forth - on a river that I have sailed for years.  It never gets old to me. 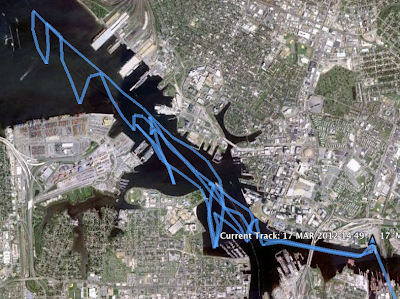 Adding to the pleasant day on the water was my youngest daughter who joined me for the last couple of hours.  She, along with her older sister, had a hand in building Spartina.  Grace was there the very first afternoon when we used a batten to trace out the curve of the bow stem on a sheet of marine ply.  Both girls sailed with me quite a bit after we launched Spartina.  Now it is something that we don't get to do nearly as often.  With both off at college, having them on board is a special treat. 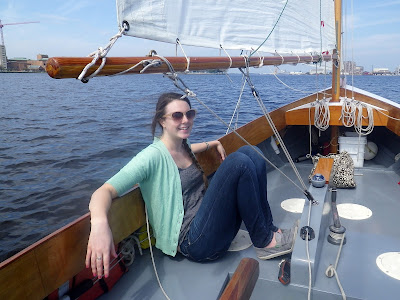 It was a nice day on the water, a perfect way to start the sailing year.

My college girl is home too. Isn't it nice? Yesterday was superb here so I assume it was even better down there. Glad someone is sailing!

Yes, glad someone is out there.

It's been nice enough here on Colington Island, but we have not gotten any of our spring work done. Cockpit wood (seat slats and coaming), mast, boomkin & bowsprit all need to be taken back to wood and re-varnished. Once set up, it goes along just fine, it's just a matter of working it in our schedules.

So, I am sailing vicariously through you. Thanks.

we'll all be sailing soon. And yes, Dave, it was nice to have the daughter home. Reminds me of the good old days.

Went out for the first pleasure sail of the year today - my wife came along to keep me company and get out of the house. My freshly painted, varnished and named dink got her bottom wet for the first time in my ownership, and we towed her behind just for grins and to see how it went.

Nice day today - fog came rolling in as soon as we left the dock and sailed up into Hills Bay, but by the time we got up into Fishing Bay, the sun broke through and we had a very pleasant, albeit too short, sail. Just up into Fishing Bay and then turn around and head back to the slip - a quick 2-hour jaunt. But much welcomed, at least for me!

good for you. It is early in the season, a short sail is good enough. Plenty of time for sailing to come.